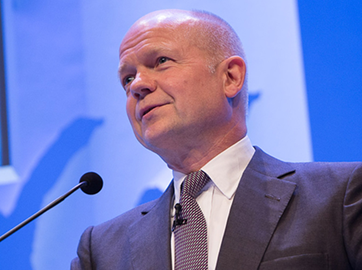 We are delighted to announce that William Hague will preside over the 2018 Scrip Awards on November 28 at The Hilton on Park Lane, London.  William Hague was born and brought up in Yorkshire. After attending a local comprehensive (and causing a media sensation as a schoolboy speaker at the Conservative Party Conference), he studied at Oxford and INSEAD, and worked in management consultancy. He then served as Member of Parliament for Richmond for 26 years. William has been a prominent political leader for more than 20 years, serving as Leader of the Conservative Party and as Foreign Secretary.

After announcing his intention to step down, he concluded his political career as First Secretary of State and Leader of the House of Commons. William is also well known as a raconteur, hailed by Hillary Clinton as “the David Beckham of toasting.” With true Yorkshire wit and natural comic timing he describes the pitfalls of politics and the disasters caused when media, drink, politicians and debating come together. He is also an accomplished historian, author of two bestsellers and winner of the History Book of the Year Award. If you haven’t booked your place to join us, there is still time.
Book a table

For all other inquiries: