Pathogen-Reduction Tech Gets Some Focus At FDA Panel Meeting, But Not Enough, Cerus Says 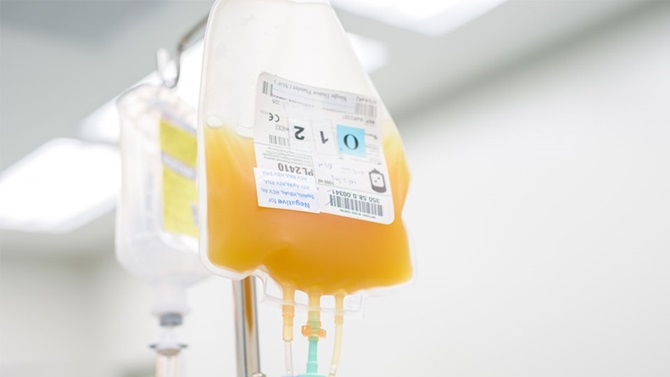 Cerus Corp. had hoped its blood transfusion protection technology would have gained a more unambiguous endorsement as a core blood safety tool during a US FDA advisory committee meeting, but the message remains muddled, according to Richard Benjamin, chief medical office for the San Francisco-based firm.

The agency's Blood Products Advisory Committee met July 18 to talk about how to improve the safety of blood platelet transfusions, considering a range of potential process and technology strategies. While Benjamin says he took some encouragement from the meeting, he was also disappointed by the lack of focus in the discussions.

"We need a final guidance that tells hospitals, 'You need to be doing something to improve safety," Cerus' Richard Benjamin says. "This is something that's a real problem.'"

Over the years, the committee has met several times to figure out strategies to help reduce risk of blood platelet contaminations and infections during transfusions to help FDA develop guidance for manufacturers and blood banks. So far there hasn't been a lot of common ground that the experts have agreed on to give FDA direction and the most recent meeting wasn't particularly fruitful in Benjamin's view. "This was a continuation of the last three BPAC meetings where the FDA waffled again," said Benjamin. "[FDA has] encouraged all these different [strategy] combinations and the committee I think was overwhelmed by too many combinations but wasn't really able to discern the differences."

According to FDA, platelet components are associated with a higher risk of sepsis and related fatality than any other transfusable blood component, and the risk of bacterial contamination of platelets is a leading risk of infection from blood transfusion. Blood banks engage in some testing strategies to catch contaminated samples that are stored for up to a week, but current practices are not sufficient, the agency suggests.

The agency issued a draft guidance in 2016 on bacterial risk control strategies for platelets, but FDA is still collecting input on what strategies should be prioritized by blood centers to reduce the risk.

Cerus' INTERCEPT pathogen inactivation technology uses controlled ultraviolet light and the DNA/RNA cross-linking agent amotosalen to kill an array of pathogens in the blood before the blood is filtered to remove unwanted chemicals and byproducts. Benjamin says it can be used to rid samples of latent bacteria that is missed by available testing regimes.

There is growth in the US, according to the firm's most recent financial reports, but current practices in the US limit use of the technology, according to Benjamin. Specifically, blood banks tend to "split" platelet units into smaller samples to allow collected platelets to go further. That can result in sample concentration and volumes that are too small to perform pathogen inactivation on. Blood banks also point to cost concerns and reimbursement restrictions tied to the technology.

Benjamin said a strong endorsement from FDA could go a long way in changing the status quo in the US.

A Lot On The Table

During the recent panel meeting, experts around the table discussed various strategies for storing blood platelets for five days and seven days, which included discussions about appropriate testing methods and protocols as well as potential use of pathogen reduction devices. Two specific types of diagnostics were discussed during the meeting, including culture-based bacterial detection tests such as BioMerieux Inc.'s BacT/ALERT 3D system and Haemonetics Corp.'s eBDS test as well rapid bacterial detection devices such as Verax Biomedical Inc.'s Platelet PGD test and Immunetics Inc.'s BacTx.

Pathogen inactivation with Cerus' tools was also discussed, generally positively, but Benjamin argues the panel was distracted by all the other strategies that weren't nearly as effective. He says the panel didn't really engage the strategy all that much, considering it could be a core solution to current challenges. He thinks the experts seemed poorly briefed on the subject.

There was agreement on the panel that pathogen reduction/ inactivation technology was very promising and is likely the future of blood transfusions, but there were concerns about the cost and resources needed to make that a reality.

James Allen, the acting chair on the panel and a retired assistant surgeon general at the US Public Health Service, noted that instead of providing specific recommendations, the advisory committee was asked to discuss the pros and cons of the different strategies the experts were presented with by FDA.

Susan Leitman, director of the Medical Research Scholars Program at the National Institutes of Health, said she has no objection to using pathogen reduction technology but noted it may not be feasible, especially for smaller blood transfusion centers due to cost and labor.

"It certainly seems extremely safe in terms of maximum insurance of not having any pathogens; bacterial, viral, parasite, things we don't even think about right now but that may come up in the future," she said. "In terms of safety, it is the most attractive method, but it's not ready for primetime. "

Allen agreed, saying it was an "exciting technology" but it's really an issue where insurers have to decide whether to cover the technology and there needs to be a public discussion about whether the technology should be covered.

Martin Schreiber, a trauma surgeon at Oregon Health and Science University, said if the panel recommends pathogen reduction technology, it would have to recommend using the technology for all other blood products, because the same concerns about potential contaminations such as malarial infections are also present in products such as red cells and plasma. "That's an argument to do it to every single [blood] component," he said.

Leitman, however, noted there's no procedure right now for using the technology for red blood cells.

Jefferson Jones, a lieutenant commander with the USPHS and the Centers for Disease Control, said his agencies support the technology based on the available date.

Benjamin, in an interview with Medtech Insight argued that BPAC's role is to discuss patient safety and not economics. He said he wondered why FDA didn't step in to ask the committee to get off the topic and focus on patient safety instead.

While several institutions presented data on the different strategies, there wasn't a clear view of what all the data meant in terms of figuring out the best path forward.

"There was a lot of data, but no information," noted Benjamin.

He argues there were a lot of small studies that couldn't be aligned because they were done under different conditions and were often too small to make any conclusions. Overall, he said they seemed to be "weak, contradictory and not convincing."

"Ours is the only strategy that has been through phase III clinical trials, randomized controlled trials-minded, by us and by third parties that has come through and has been proven efficacious. All of the rest are not that," Benjamin added. "It is bewildering that they even look at the other data."

Cerus Is Ready Ramp-Up, If Needed

At the end of the day, the message the panel sent to FDA is they need to finalize their guidance so that there is a cohesive strategy to tackle the issue of blood platelet contamination, according to Benjamin.

"I think they heard this from a number of people and that's all we need from this," he added. "We need a final guidance that tells hospitals, 'You need to be doing something to improve safety. This is something that's a real problem.'"

Benjamin thinks if FDA does send that message, hospitals will conclude they need to adopt pathogen reduction technology because it is a lot simpler than trying to tackle the issue with multiple strategies.

"We're working with FDA to moving some of these strategies forward and think the FDA is intent on making this easier for hospitals," added Benjamin.

He says if FDA decides it does want to move ahead with recommending adoption of INTERCEPT system as part of a broad strategy, it will likely take at least a year to fully finalize the recommendations. That, he says, is enough time for Cerus to scale up production and distribute peripheral equipment to make pathogen inactivation accessible nationwide.

"I think over the next 12 months we can achieve this with the help of the FDA, and I believe the FDA is starting to help us," he added.

Cerus is already working with hospitals and blood banks to incorporate pathogen inactivation into their routine practices, added Benjamin while also noting more and more hospitals are buying into the strategy. But, he acknowledged, some blood banks are still resistant because they would be required to do more work and take on more costs.

"It is quite amusing to watch them squirm when their customers want something and they don't want to do it which is the situation we are in at the moment," he added.