Sharfstein: US FDA Incentives Not Broke, But Fix Them

The former US FDA principal deputy commissioner argues that accelerated approval, fast track and breakthrough designation standards may need updating, along with orphan and pediatric exclusivity requirements, to enhance the programs' efficacy.

A former US FDA principal deputy commissioner is calling for reforms to accelerated approval, orphan drug exclusivity and other incentives to improve their effectiveness and ensure sponsor rewards are balanced with their costs to the health care system.

Joshua Sharfstein, who served as the US Food and Drug Administration's second in command from 2009 to 2011 under Commissioner Margaret Hamburg and now is vice dean for public health practice and community engagement at the Johns Hopkins Bloomberg School of Public Health, did not say in a 14 January editorial in the Journal of the American Medical Association that the FDA's expedited approval and other incentive programs are broken.

But Sharfstein called for some improvements, saying that proposals such as limiting pricing or exclusivity for sponsors until they finish the necessary confirmatory studied under accelerated approval may be helpful.

"If the point of four decades of FDA reform was to find new cures faster, the point of reforming FDA reform should be to increase the effectiveness and efficiency of this search, propelling the discovery of needed therapies forward while supporting the ability of the health care system to bring these advances to the patients who need them," Sharfstein wrote.

The editorial accompanied an article on FDA drug approval and regulation from 1983 to 2018 by Johnathan Darrow of Harvard Medical School and others that looking at the impact of expedited approval and other programs on development and approval times.

Despite the addition of expedited pathways and other programs, overall development times have not become shorter, Darrow wrote. The time from the date authorizing human studies (IND clearance) to approval increased over time from an average of 7.8 years from 1986 to 1996 and 7.0 years from 1997 to 2007, to 9.1 years from 2008 to 2017. (See charts at end of story.)

Sharfstein wrote that overall the data do not show an agency struggling, but that the regulatory process now is a "thicket of special programs, flexible review criteria and generous incentives."

Indeed, many novel drugs approved each year take advantage of expedited programs and other incentives. In 2019, the majority of approved drugs used one or several of them. (Also see "A Decade Of Novel CDER Approvals, By The Numbers" - Pink Sheet, 9 Jan, 2020.)

Recalibrating The Cost Of Exclusivity
In addition to accelerated approval changes, Sharfstein argued for orphan drug exclusivity reforms, including requiring that the agency promote "meaningful competition for non-orphan uses" because "companies have found ways to use orphan drug approvals to box out competition for some of the country's most popular drugs, far beyond what the Orphan Drug Act intended."

Sharfstein also said that Congress should consider Affordable Care Act changes, including the biologics exclusivity provisions, that have hindered US access to biosimilars compared to Europe.

In addition, Sharfstein suggested the agency "recalibrate" programs offering marketing exclusivity. He said pediatric exclusivity in particular should be adjusted because it has been determined that it costs the health care system more than $6 for every $1 spent by a sponsor on a pediatric trial.

Sharfstein told the Pink Sheet that "the reward for exclusivity should be proportionate to the expense."

"I don't think a $10m study should bring about hundreds of millions of dollars of exclusivity," he said.

Exclusivity changes, or reductions, would seem to fly in the face of patient and other stakeholders' pushes to increase pediatric testing for products. The Best Pharmaceuticals for Children Act and Pediatric Research Equity Act have encouraged more pediatric studies of drugs, but despite improvements, some areas still are lacking treatments. (Also see "Full Pediatric Labeling Is Lacking For One Third Of Orphan Drugs, US FDA Finds" - Pink Sheet, 2 Sep, 2019.)

Focus Breakthrough, Fast Track On Products Most Likely To Benefit, Sharfstein Says
Fast track and breakthrough therapy designation requirements could be updated "to increase the chance the treatments will be shown to offer major advances to patients," Sharfstein wrote.

"FDA should review these programs with an eye to focusing them on the products most likely to benefit," he told the Pink Sheet.

Ever since the breakthrough designation was created in 2012, there have been questions about the agency's standard for awarding it, as well as assertions that the bar is too low. (Also see "FDA's Breakthrough Bar May Be Set Too Low, Jenkins Says" - Pink Sheet, 30 Jun, 2016.)

FDA officials have argued that breakthrough never changed evidentiary standards and was not intended to be a drug ratings system. (Also see "US FDA Pushes Back Against Critics: Breakthrough Is Not A Drug 'Beauty Contest'" - Pink Sheet, 10 Dec, 2019.)

Postmarketing safety oversight also should be enhanced for medications offering major benefits along with serious risks. Sharfstein wrote that the Risk Evaluation and Mitigation Strategy (REMS) program could be operated with much greater diligence and transparency and that the FDA should release implementation updates and new data regularly.

"It shouldn’t take a [Freedom of Information Act] request and years of time to make public these kinds of details about how programs are doing," he said in an email.

Too Fast-Too Slow Debate Continues
Darrow and colleagues raised questions about what appears to be a decreasing amount of evidence needed to approve drugs. They found that after 80.6% of new drugs were supported by at least two pivotal trials from 1995 to 1997, the rate dropped to 52.8% from 2015 to 2017. The proportion of approvals based on at least one trial using an active comparator decreased from 44% to 29%, and the proportion of approvals based on nonrandomized studies with only a single intervention group increased from 4% to 17% during the same period.

Darrow and colleagues wrote that while expedited approval programs allowed earlier access to new treatments, they also exposed patients to "the potential disadvantages of rapid approval of treatments with clinical outcomes that are not adequately characterized." They said that Congress and the research community should regularly re-evaluate the balance between the advantages and consequences of the programs.

Arguments that the FDA approves drugs either too fast or too slow seem to be commonplace among various stakeholder groups. The New York Times editorial board published an editorial on 11 January stating that the FDA has allowed "increasingly dubious medical products to seep into the marketplace" following decisions to accept real-world or surrogate evidence instead of traditional clinical trials. The paper suggested Commissioner Stephen Hahn "take a fresh look at some of these shifting standards and commit to abandoning the ones that don't work."

"That will almost certainly mean that the approval process slows down – and that's OK," the newspaper said.

Former Commissioner Scott Gottlieb defended the FDA's current approaches, arguing on Twitter that improvements in the science of drug development now allow for faster approvals, in part because the biological basis of new drugs are better understood.

Gottlieb also said that drugs now can target narrow populations, which allows for a "robust, outsized treatment response" in serious diseases where there are few options.

JAMA Paper Highlights Approval, Review Time Changes Amid Expedited Approval Program Additions
A survey of the era since accelerated approval and other incentives have been enacted showed the time from IND clearance to drug approval lengthened, although agency assessment times decreased. 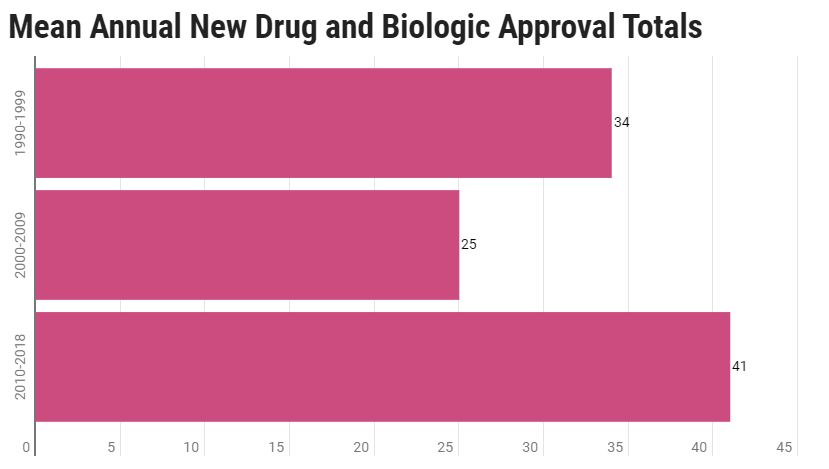 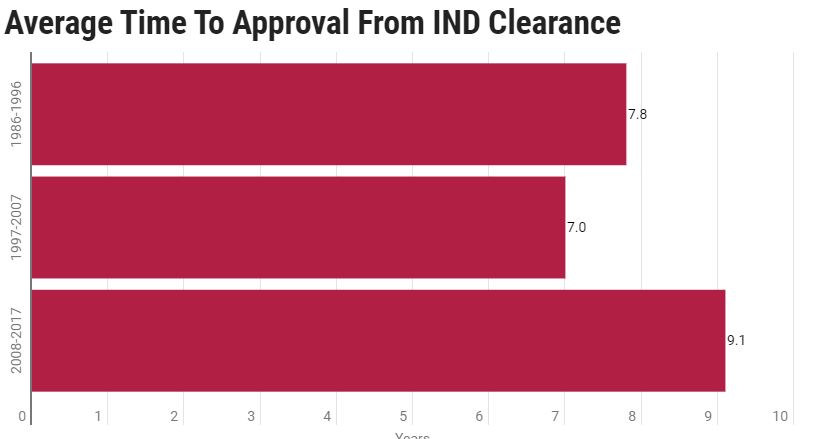 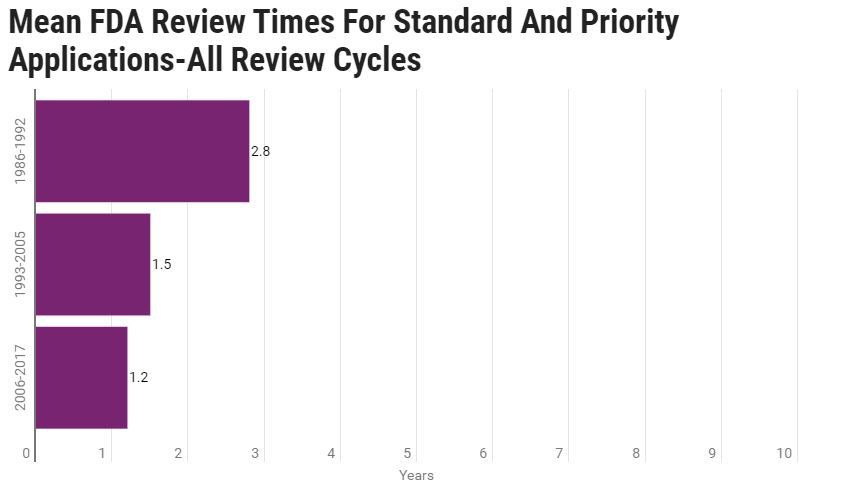