Cystic fibrosis (CF) is an inherited disease affecting water retention, most notably causing patients to produce large amounts of thick mucus. This mucus blocks up the lungs and digestive system and is difficult to clear. People with CF commonly and frequently suffer from respiratory infections, resulting in scarring of their airways.

Although CF is the most common autosomal recessive disease in Europe, affecting 1 in 2,500 newborns, the European Union considers it to be a rare disease [1]. More than 2,000 possible mutations in the CF transmembrane conductance regulator (CFTR) gene are responsible for the disease.

Eventually, patients develop infections that can't be cured with antibiotics. Their lungs always contain bacteria, leading to a chronically infected state. The most common pathogens include Staphylococcus aureus (SA) and Pseudomonas aeruginosa (PA), which are found in around half of all CF patients (see Figures 1 and 2). While Burkholderia cepacia complex (Bcc) is one of the least prevalent bacteria causing infections among CF patients, it is one of the most dangerous. Such infections are very difficult to treat and cause a high rate of functional decline in the lungs.

Burkholderia cepacia complex is a group of gram-negative bacteria found in the environment, and is considered an opportunistic pathogen

Bcc is a group of 22 gram-negative related bacterial species that are widespread in the environment, often found in soil and water [1]. There is little risk of infection with Bcc among healthy people, but it presents a threat to immunocompromised patients, including those who have CF. Bcc can be transmitted through the community as well as within hospital environments.


Table 1 provides a few examples of outbreaks of Bcc among immunocompromised non-CF patients over recent years in various countries, demonstrating the danger of this opportunistic pathogen.


In addition to the threat among immunocompromised patients in general, Bcc is an opportunistic pathogen that is particularly dangerous for people with CF. It causes severe decline in lung function, leading to a potentially life-threatening systemic infection known as cepacian syndrome. Cepacian syndrome is characterized by necrotizing pneumonia and bacteremia.

Bcc is typically resistant to antibiotics and has numerous virulent genetic determinants which make it extremely difficult to treat. An essential component of improved management and prevention of infections is gaining a better understanding of its resistant nature.

Infections with SA and PA are more prevalent than infections with Bcc among CF patients. However, although Bcc infections are less common than other microbiology infections, they are still dangerous and present serious challenges.

Figure 1 demonstrates the prevalence of SA, PA, and Bcc infections among CF patients in the US in 2016.


Figure 1. Prevalence of Staphylococcus aureus, Pseudomonas aeruginosa, and Burkholderia cepacia complex among cystic fibrosis patients in the US, 2016 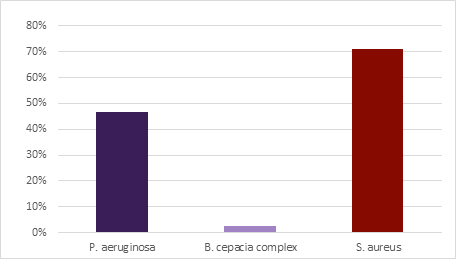 
Figure 2 demonstrates the prevalence of chronic SA, PA, and Bcc infections among CF patients in Europe in 2016. 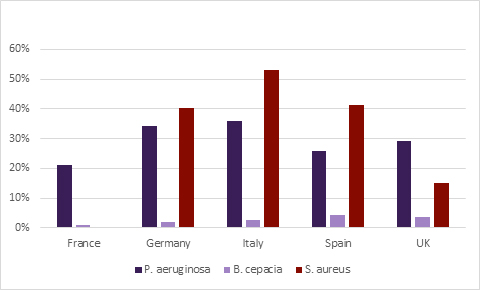 Note: S. aureus data were not available for France.


Lack of research, eradication plan, and standard treatment strategy, as well as in vivo and in vitro testing conflicts, are unmet needs regarding Burkholderia cepacia complex infections among cystic fibrosis patients

As of March 2019, there are no relevant studies of treatments that could eliminate Bcc from the respiratory tract of CF patients. This emphasizes the immediate need for more research into treatment of chronic infections of Bcc among CF patients.

Use of trimethoprim-sulfamethoxazole is generally recommended for treatment of Bcc infections, although no standard treatment strategy exists. If trimethoprim-sulfamethoxazole cannot be administered, then combinations containing first- and second-line agents are considered according to the in vitro antimicrobial susceptibility patterns. Examples of these combinations include ceftazidime, meropenem, and penicillins. As regarding penicillins, different results have been described by the European Committee on Antimicrobial Susceptibility Testing (EUCAST) and the Clinical & Laboratory Standards Institute (CLSI) guidelines. Therefore, in vitro susceptibility assessment is required before administration [1].

Future considerations to address in order to provide standard treatment or eradication are the following:

•    lack of correlation between in vitro and in vivo susceptibility data
•    duration of therapy
•    use of monotherapy versus combined antibiotic therapy.