Type 2 diabetes is a large and growing health crisis in the United States and throughout the world. According to forecasts by Datamonitor Healthcare, it is expected that there will be 31.4 million cases of type 2 diabetes in the United States alone in 2018. Spending on pharmaceutical treatments will reach $18.2 billion this year and grow to $28.2 billion by 2025 [3].  Heart failure prevalence in the United States is expected to reach 5.8 million cases in 2018, needing $3.8 billion in pharmaceutical treatments. This spending is expected to nearly double to $7.3 billion by 2025 [3]. According to the Healthcare Cost and Utilization Project (HCUP) data, heart failure consistently contributes some of the highest hospitalization rates in elderly populations [4], further escalating the costs to patients and society.

Even with these proven associations between the two diseases, to date the FDA has not required any heart failure outcomes as part of its guidance to industry for establishing cardiovascular risk when evaluating new antidiabetic therapies. This FDA guidance released in 2008 [5] recommends sponsors assess major cardiovascular adverse event (MACE) endpoints such as cardiovascular mortality, myocardial infarction, and stroke. Since the inception of the guidance, industry sponsors have undertaken 39 trials looking at typical MACE outcomes in type 2 diabetes. 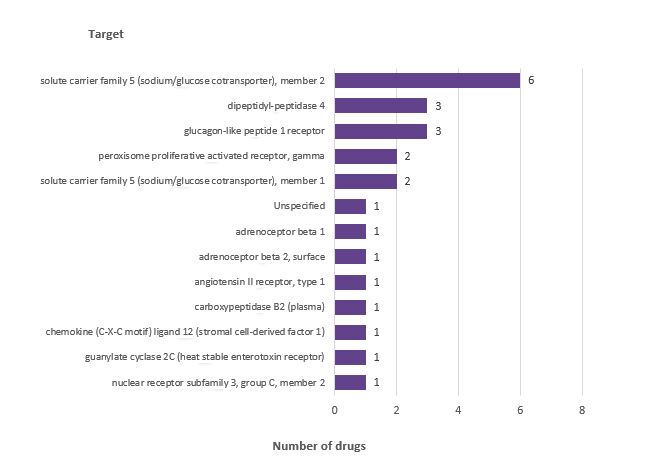 After over a decade of fairly light trial activity in this area with no more than four trials started per year, and several years in which no trials began, there was a sharp increase in 2016 to nine trials and an even more dramatic jump to 15 trials in 2017.  (Figure 2) 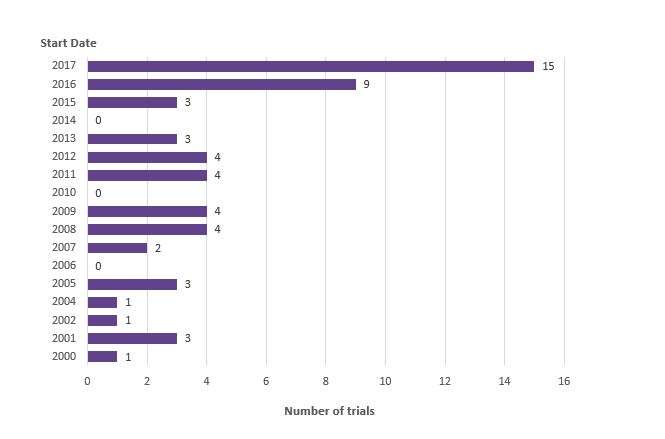 Source: Trialtrove® May 2018
Boehringer Ingelheim has sponsored the most trials for the heart failure/diabetes comorbidity. (Figure 3) All ten trials are ongoing or planned, involve Jardiance (empagliflozin), and are relatively recent, going back only to 2016 following evidence of benefit in this population from the EMPA-REG-OUTCOME trial [6]. The two most significant of their trials are the Phase III EMPEROR-Preserved and EMPEROR-Reduced heart failure outcome studies together involving nearly 7,000 patients and expected to complete in June 2020. AstraZeneca is next with six trials, mostly with Forxiga (dapagliflozin) and Onglyza (saxagliptin), although no large heart failure outcomes studies have been conducted. Eli Lilly follows with five studies, several of those partnered with Boehringer for Jardiance including the EMPEROR studies and a couple for Byetta (exenatide).  While Boehringer has firmly bet on empagliflozin for diabetes and heart failure, Novartis has decided to hedge its bets and is conducting five trials with four separate drugs – Lusefi (luseogliflozin), Galvus (vildagliptin), the heart failure drug Entresto (sacubitril + valsartan), and the pipeline drug LIK-066, a SGLT 1&2 inhibitor being compared directly against empagliflozin. Novo Nordisk rounds out the top five with five trials of its own, three for Victoza, (liraglutide) one for Tresiba (insulin degludec), and one for semaglutide. Interestingly, the cardiovascular outcomes trial for Tresiba (the DEVOTE study) which started in 2013 and ended in 2016 included patients with heart failure but did not have any heart failure outcomes, but Novo seems to have changed its tactics and has now has included heart failure hospitalization as a secondary endpoint in the PIONEER-6 cardiovascular outcomes trial for semaglutide which began in 2017.

While the diabetes/heart failure comorbidity space has received some renewed attention as of late, it has yet to show it can sustain the momentum. So far in 2018, no trials have begun and just two are planned for the remainder of the year. Nearly 40% of the new activity is attributable to just one drug and less than 8% is from non-antidiabetic drugs suggesting there is some potential opportunity here for the cardiovascular drug classes to delve deeper into the relationship between heart failure and type 2 diabetes.