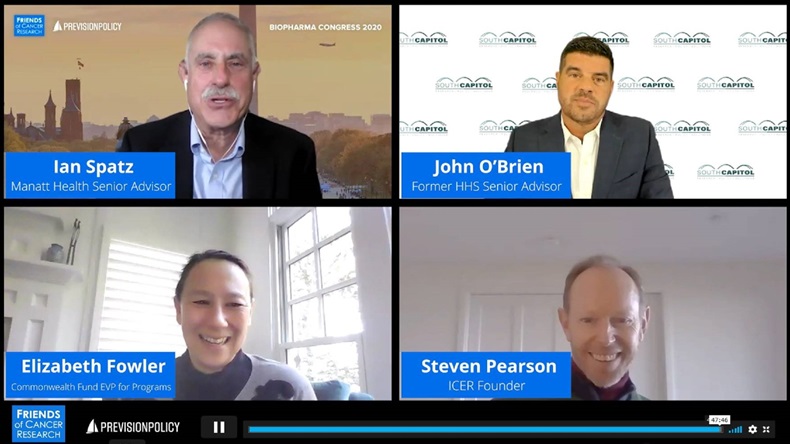 Concern with high drug prices will continue to be a major issue for the public going forward, though it may not be as high a priority as it has been in the past few years because of the COVID-19 pandemic, Commonwealth Fund executive VP for programs Elizabeth Fowler observed during a discussion at the virtual Biopharma Congress that aired on 5 November.

“It’s very likely there continues to be a public appetite to address the issues related to drug pricing. I don’t think that goes away,” she commented. “Drug pricing has generally been at the top of the list of voter concerns. I think it may have slipped two or three [spots] after COVID but it’s still in the top three or five.”

Fowler pointed out there is “bipartisan agreement that something needs to be done but not bipartisan agreement on what needs to be done. So that’s where you get stuck.” Fowler was previously VP for global health policy at Johnson & Johnson. She also held key health care policy positions in the Obama Administration after serving as chief health advisor to former Sen. Max Baucus, D-MT, a leading architect of the Affordable Care Act.

She suggested drug pricing reform might gain momentum as a source of funding offsets for other health care spending priorities.

“I think it’s likely this issue is back on the agenda because Congress may need the revenues or offsets generated by drug pricing reform for other measures, for example health coverage to address COVID issues [or] Medicare solvency. There may be other things they want to do where drug pricing reform is a means to an end rather than an end unto itself.” Prospects for legislative action on drug pricing in the near term will depend on the outcome of the US elections, which is still unclear. (Also see "President ????: What US Election Uncertainty Means For Biopharma" - Pink Sheet, 4 Nov, 2020.)

John O’Brien, a partner with South Capitol consulting firm and previously a senior advisor for drug pricing and health care in the Trump Administration, noted that drug pricing policies discussed on the campaign trail can look different once the candidate is in office. “We have a different conversation about drug pricing when we’re in campaign season… versus the words and actions of an incumbent who’s actually trying to consider what policy to do.”

He added, it “also depends on what problem you’re trying to solve. If you’re trying to do something about consumers who think prices that are too high, they’re probably talking about how much they spend at the pharmacy counter. If you’re talking about total spending on drug pricing, you’re talking what employers spend on prescription drugs as a component of health care spending. Or, as Liz aptly put it, you may be just trying to find offsets for another project. So yes, I do think drug pricing will always be on the table. Why it’s on the table depends on the year and who’s talking about it.”

Steve Pearson, president of the Institute for Clinical and Economic Review, agreed there is likely to be action on drug pricing in the near future but “it may not be at the federal level. It may be in the states or in the private market.”

Pearson added “the basic driving force [behind drug pricing reform] is only going to get greater as the economy starts to really grapple with the drop in employer profits next year and the cycle of trying to design, at least in the private insurance market, health insurance benefits that they can afford. It’s going to put even more pressure on a growth area, which is pharmaceutical spending.”

The panelists discussed the important dynamics that play into getting drug pricing policy over the finish line. Fowler listed six elements that are necessary “for major federal policy to pass.” She suggested “many of those factors are present. It’s probably the leadership and getting everyone together on the same page agreeing with the policy, and then probably the timing,” that is needed. So not 100% but we are getting close.”

The elements include: 1) A strong case for policy change; 2) Public opinion in support of policy change; 3) Well developed policy options (“there’s a bonus if there’s a state law or pilot or demonstration that can help inform federal policy”); 4) Congressional and executive branch leadership must “really want to make this change and are willing to put a lot on the line to make this happen;” 5) Stakeholders are engaged and working with policymakers “or they’re marginalized;” 6) A window of opportunity: “timing is important…and also a vehicle.”

O’Brien suggested senior advisors in the White House can also have a significant impact on what policy advances, based on his experience with the Administration. “If there’s one thing I took away it’s that personnel is policy,” he said. HHS Secretary Alex Azar “sent a proposal to…allow price negotiation in the [Medicare Part D] protected classes if the drug company raises prices faster than inflation. That proposal didn’t make it. He sent a number of policies to the White House that we saw or didn’t see” emerge, he recounted.

“I won’t get into the gory details of who stepped in and said what,” he quipped. “But In the end, you can have a [Centers for Medicare and Medicaid Services] administrator and a Health secretary who want to do the entire HR 3 agenda and then some, and then have a chair of the Domestic Policy Council or a White House chief of staff for policy who says, ‘No that’s not where my candidate is going.’” So “who lands in those slots I think is sometimes more important than the topics we’re talking about.”

O’Brien predicted international reference pricing will retain some credibility among Republicans now that it has been endorsed by Trump even if it doesn’t get implemented. “International reference pricing is out of the barn,” he said. “People are starting to say, ‘Hey I can oppose socialism, I can oppose all these meta concepts people tell me I should not like. But if you’re asking why I should pay 100% for an injectable rheumatoid arthritis drug and you won’t see a competitor here [in the US] until 2023 and I know its 80% less overseas, yeah I want to know a real answer to that question.’”

Nevertheless, O’Brien indicated if Trump wins a second term, he may not continue to push policies such as international reference pricing that he advanced in his first term. (Also see "Trump’s Drug Pricing Plan: The Headlines Are The Goal – But Also A Threat" - Pink Sheet, 15 Sep, 2020.)

When a “new president either in their second term or in their first term begins having conversations with stakeholders, there’s another opportunity to go back to the drawing board on a number of things. So, I think this administration would still continue to work on lowering drug prices [but] mainly by focusing on people’s out of pocket costs. I don’t necessarily have certainty that those same approaches would be the preferred approach.”

Fowler discussed prospects in Congress for House Speaker Nancy Pelosi’s HR 3, the drug pricing reform bill that would establish a system of government price “negotiation” based on international prices and penalize manufacturers with an up to 95% excise tax for non-cooperation. It was passed by the full House in late 2019. (Also see "House Price 'Negotiation' Plan: It Is Even Worse Than It Sounds" - Pink Sheet, 24 Sep, 2019.)

“It’s not what Senate Democrats have put on the table and not the direction they were heading … and that’s the problem,” she pointed out. “It’s still up in the air with control of the Senate, but if Democrats take control with a very narrow margin, or if Republicans retain control with a narrow margin, either way you have the challenge that the House has spoken, and it does feel as if that’s their position, but I don’t know that that’s the starting point for the other body.”

O’Brien added if the Senate remains under Republican control and Joe Biden is elected President, it could provide him with a buffer against the extreme policies such as HR 3, implying he doesn’t think Biden would be in favor of that approach. “If we do have a Republican Senate … it also takes some pressure off a potential President Biden because he doesn’t have to resist” a Democrat-controlled congress “and being asked to do some very aggressive things on drug pricing,” O’Brien said.

All three panelists urged biopharma to more constructively engage with policymakers going forward to avoid the political heat they’ve been taking over the past few years on drug pricing.

“I’d say the industry is at its best when it partners with policymakers,” like when they worked toward passage of the Medicare Modernization Act and the ACA, Fowler said. “Better to be a partner at the table, coming with solutions and trying to help solve mutual problems and policy dilemmas than to be on the receiving end and just pushing back. … I think industry is at its worst when it’s trying to kill everything that’s out there and by any means necessary.”

She suggested “one problem that we’ve all seen through COVID that could benefit from industry assistance and support is addressing health inequity. The disparities that we’ve seen as a result of COVID are striking and that’s something where maybe they could be a partner in helping to solve that.”

Pearson urged industry to focus more attention on “demonstrating the value of your drug to patients. Don’t stop and think that all I have to do is change that blood indicator for FDA to say, ‘Yes’ and my job is done and I hand it over to marketing and they go out and try to sell it. Figure out how you can generate the evidence that can demonstrate what you want, which is to show that your drug helps patients with their quality of life, with their functions, and do that with good science.”

He also urged industry to look beyond solving “just scientific problems. … Solve the broader social problems. Figure out how to create that affordable system that can still reward innovation.”

O’Brien agreed on the value of industry “coming in to talk to the current Administration, if there’s a round two, or the next Administration and say, ‘We are here, you’re trying to get here, and here are some ways that we might be able to get there together.” He discouraged “bringing in the binder that we pitch to Democrats that says, ‘affordability and access’ or the binder we pitch to Republicans that says, ‘choice and competition.’ We really need some new ideas.”

The Trump Administration’s drug pricing policy “blueprint” was “intended to be a comprehensive approach of fixing all the different incentives and you lose a little here, but you gain a little there,” O’Brien continued. “Instead, we got a bunch of stakeholders trying to advance what they like and kill what they didn’t. And I would really love a do-over on that, mainly to get at some of the things that people still complain about.”