To investigate whether using Sitetrove data for site selection can enhance study enrollment performance, we conducted a retrospective analysis of a recently completed global Type 2 Diabetes trial, selected by the trial sponsor (a top-10 pharmaceutical company) for its enrollment success.

Sitetrove first pulled data on 14,341 investigators, representing the known global universe of investigators at the time of the analysis with confirmed clinical trial experience in this metabolic/endocrinology indication. Based on the requirements of the study protocol, Sitetrove then prioritized and ranked these investigators using a proprietary algorithm, including aspects of past experience and current trial involvement, to predict enrollment performance. Investigators were then grouped into three tiers based on their Sitetrove rating.

Applying a data-driven approach to site selection using Sitetrove’s investigator intelligence service can increase average study site enrollment performance. For the actual clinical study analyzed herein, the number of sites needed to achieve target enrollment could have been reduced by 19%, with direct cost savings of over $900,000. 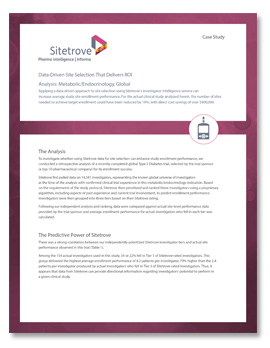