There were an estimated 558,000 incident cases of breast cancer across the analyzed markets in 2015, with moderate growth forecasted over the next 20 years

Figure: Trends in incident cases of breast cancer in females in the US, Japan, and five major EU markets, by country, 2015–35 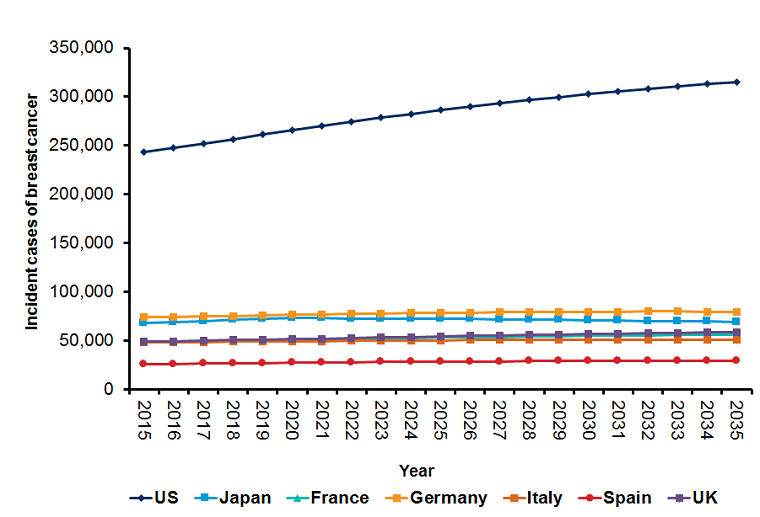 The majority (84%) of incident breast cancer cases were diagnosed at Stage I or II, where the tumor is small and has either not spread outside the breast, or where small areas of breast cancer cells are found in the lymph nodes close to the breast. This finding is an illustration of a great public health success – population breast screening.

Datamonitor Healthcare’s Epidemiology: Breast cancer module provides a detailed epidemiological analysis of the incidence of breast cancer across the US, Japan, and five major EU markets. This includes a 20-year incidence forecast (2015–35), age and gender segmentations, and subtype (luminal A, luminal B, HER2 overexpressing and triple-negative) and stage segmentations. An interactive epidemiology datapack also provides a 20-year prevalence forecast segmented by disease subtype and selected biomarkers. In addition, the datapack incorporates treatment data from Datamonitor Healthcare’s proprietary breast cancer physician survey in order to estimate actively treated and drug treated cases of breast cancer segmented by disease subtype, stage, and line of therapy.