It is estimated that in 2016, there were 102.5 million total prevalent cases of migraine (including both definite and probable migraine) in the US, Japan, and five major EU markets [1].  Migraine disorder is one of the most common disabling conditions to live with. Taking the UK as an example, migraine related absenteeism has costed the UK economy an estimated 2.24 billion pounds in one year alone. This would have been even greater if the reduced productivity of people who try to work with migraine symptoms is accounted for [2]. It is therefore essential that a truly effective prophylactic migraine medicine is found. Many currently available migraine therapies are acute and provide the patient with some relief after the onset of a migraine, whereas preventative medicines are extremely limited and not entirely effective [3]. This blog will look at the past, present, and future of migraine prophylaxis.

Over the past 10 years the number of widely launched migraine drugs has remained constant at approximately 40 drugs available in markets across the world (Figure 1). Most of these drugs belong to the triptan class, which are effective at treating individual headaches mediated through the serotoninergic system. Yet, they are far from providing preventive treatment or a cure. Pharmaceutical companies have recognized this deficiency in treatment. Since 2011, drugs in active development have increased by approximately 50%. This increase correlates with the introduction of the exciting novel calcitonin gene-related peptide (CGRP) inhibitor mechanism, which has proven to prevent migraines in clinical tests. 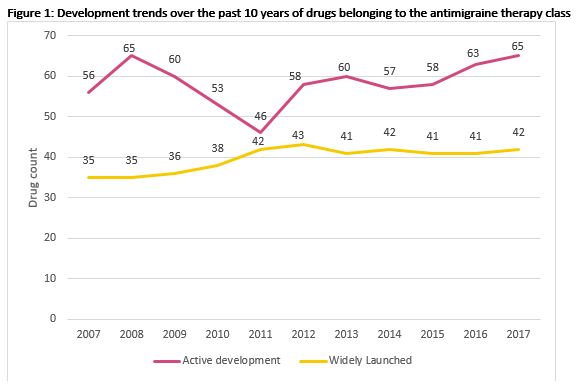 Note: A general overview of all antimigraine drugs, including both drugs for treatment and prevention.

Even though the neuropeptide CGRP was originally discovered 30 years ago through alternative processing of the mRNA for calcitonin, it is only recently that its significance in the migraine field became apparent [4]. Crucial to this mechanism of action is the trigeminal ganglion, where CGRP and CGRP receptors are expressed within C-fibers and A-fibers respectively. It has been observed that in acute migraine attacks CGRP is released into the cranial venous flow, and similarly intravenous CGRP has been shown to induce migraine-like symptoms in migraine patients. This has led to great interest within the pharmaceutical industry towards the development of CGRP inhibitors to tackle this key culprit in migraines. Outstandingly, all the efficacy trials testing anti-GRCP medication have been positive, whether in targeting acute attacks, preventing attack onset, or reducing attacks in chronic migraine or frequent episodic migraine [5].

As can be seen from Figure 2, the companies developing erenumab, fremanezumab and galcanezumab, have all reached the final hurdle in the race to market the first anti-CGRP migraine prophylactic medicine with submission of filings for approval. Companies involved in the development of this class of drugs are predominantly large Pharma. Different routes have been taken in the development of these drugs. Eli Lilly (Lilly), for instance, discovered and is developing the drug, galcanezumab, in-house. Amgen and Novartis are co-developing erenumab. Pfizer discovered fremanezumab, out-licensed it to two other big Pharma companies (Teva and Otsuka), but discontinued their own further involvement.  The number of trials per phase shows the varying number of trials for each drug. 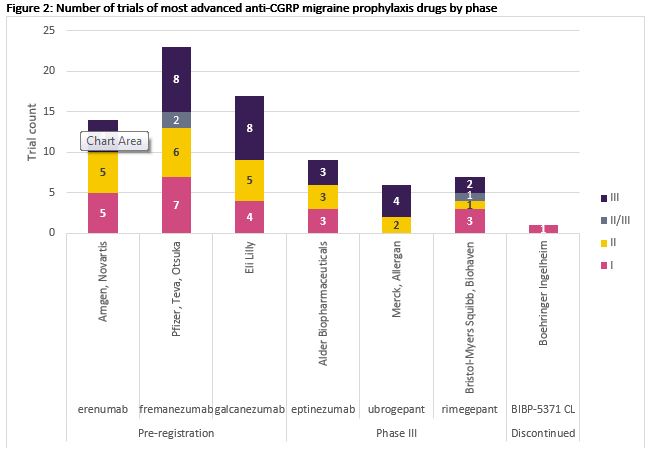 This provides Lilly’s galcanezumab with plenty more support and evidence across a larger population of patients and therefore an advantage with the regulatory bodies. These drugs, as well as the still in Phase III eptinezumab, are all to be administered via intravenous (IV) injection. Allergan’s ubrogepant and Biohaven’s rimegepant have the advantage of being orally administered, although their development lags. Boehringer Ingelheim’s asset, BIBP-5371 CL was also orally available for the treatment of migraine, but in their first and only clinical trial, detailed toxicological evaluation revealed phospholipidosis findings leading them to discontinue development.

What is the current landscape for these drugs and where they are heading? In Figure 3, we can see the ongoing and planned clinical activity of these drugs. For instance, Teva’s fremanezumab has six open trials which comprises the most open and planned trials.  The financial outlay for this program suggests their confidence in this therapy. Otsuka is currently carrying out three of these trials in Japan, as per their exclusive licensing agreement with Teva to develop and market fremanezumab in Japan.  It is interesting to note that the trials are evaluating fremanezumab’s subcutaneous (SC) administration which could provide a competitive advantage over the farther along in-development IV drugs.

Teva is carrying out the three other trials with fremanezumab, but already expanding the potential use of the drug by investigating the drug for cluster headaches. They have already received fast track designation for the prevention of cluster headaches, which proves collectively this drug has a tremendous amount of momentum. Eli Lilly is providing stiff competition, however, with five open trials for galcanezumab, of which two are indicated for cluster headaches and two are in Japanese patients; rivalling that of Otsuka. Lilly’s galcanezumab received fast track designation (2015) for the prevention of cluster headaches, well before Teva’s fremanezumab (2017). Biohaven’s rimegepant and Allergan’s ubrogepant currently have several open trials between them. These are primarily focused on collating further supporting evidence for migraine prophylaxis and analyzing oral bioavailability and effectiveness, due to these being the first oral anti-CGRP migraine prophylaxis drugs aiming to be marketed.

Amgen and Novartis have no current ongoing trials, but there is a planned Phase III trial sponsored by Novartis, to take place outside of Europe and the US.  This could signal a push to expand potential market and thus revenue. Since regulatory agencies require drug companies to test their drugs in pediatric and adolescent populations, Amgen is seeking to edge their approval chances further, with a planned Phase II trial to investigate erenumab for migraine prevention in children and adolescents. There is a similar big push from Teva who has four planned Phase II trials for fremanezumab in pediatric populations, again looking through further means to gain regulatory backing. Teva also has a planned Phase III trial evaluating fremanezumab’s potential through SC administration. Moreover, Eli Lilly is also planning to tackle chronic migraines in child populations with two Phase II trials planned for galcanezumab and Alder are attempting to compete with Teva and Otsuka, with a planned Phase IIb trial for SC administration of eptinezumab.

All in all, it is a very exciting era for the migraine field and patients alike. This may be the year that patients suffering from chronic and regular migraines can look forward with hope to the significant relief anti-CGRP therapies might bring. Will it be Amgen/Novartis’s erenumab, Teva’s fremanezumab or Lilly’s galcanezumab who will reach the regulatory finish line to market?  Currently Amgen/Novartis’s erenumab is the only drug out of those discussed, to have been set a Prescription Drug User Fee Act (PDUFA) target action date of 17 May, 2018, by the FDA. We can also look forward to a wave of orally available anti-CGRP medications from Allergan and Biohaven, tailing the leaders with a much more practical route of administration. It’s very hard not to be optimistic with these anti-migraine trials proving so promising. Everything going well, we may soon be able to say goodbye to the extent of disability caused by migraine disorders and the knock-on effects this has on global populations and economies.