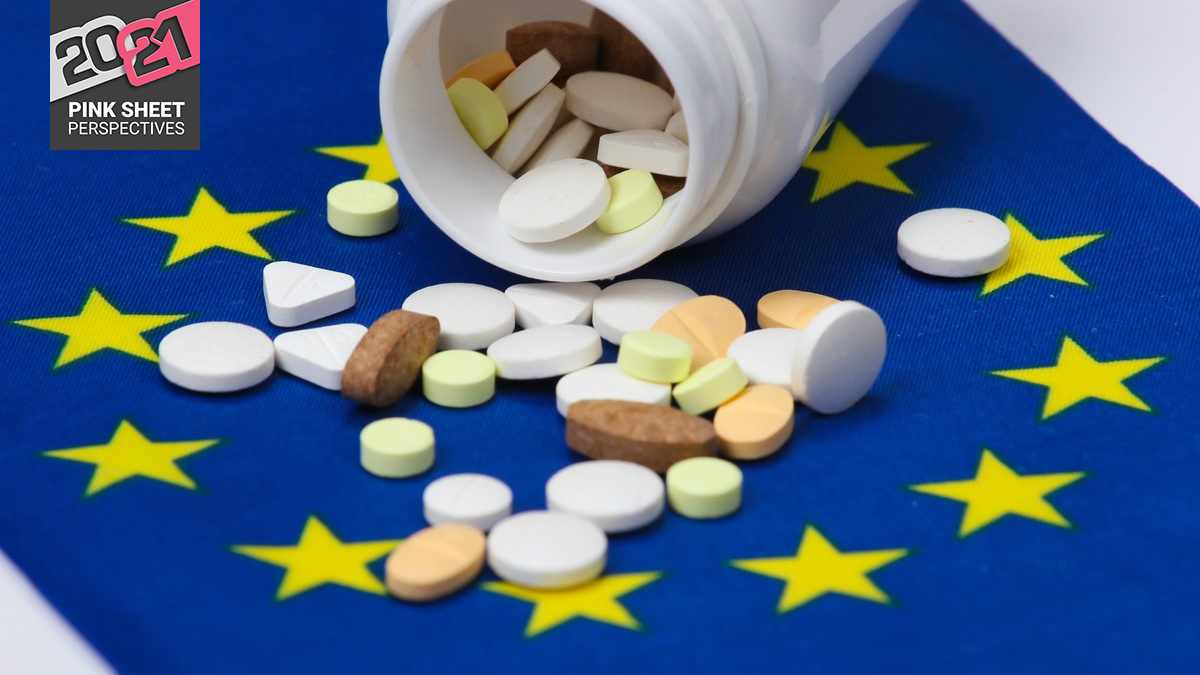 The EU approved a range of novel drugs last year(Source:Shutterstock)

In 2020, 42 products containing a total of 41 new active substances received an EU marketing authorization, a sharp increase on the 28 NAS-containing products that were cleared in 2019, and just short of the three-year peak of 45 seen in 2018.

Among the most high-profile products to be approved last year were Pfizer Inc./BioNTech SE’s Comirnaty, the first vaccine for COVID-19, and Gilead Sciences, Inc.’s Veklury (remdesivir) for the treatment of COVID-19 in adults and adolescents with pneumonia requiring supplemental oxygen.

The year saw a host of other novel NAS-containing medicines OKd for pan-EU marketing, including three gene therapy products and a range of drugs for various cancer indications. A total of 17 orphan medicines were approved, well up on the five seen in 2019 and the same number as in 2018.

The number of products gaining an EU conditional marketing authorization rose to 12, from seven the previous year. They included both the COVID-19 products, Cominarty and Veklury, as well as the TB Alliance’s Dovprela (pretomanid), for highly drug-resistant forms of pulmonary tuberculosis, and Roche’s tumor-agnostic cancer drug Rozlytrek.

Three of the approvals were granted under the EU's "exceptional circumstances” mechanism: the two components of Janssen Pharmaceutica Inc.’s Ebola vaccine, and an orphan drug for anthrax inhalation, obiltoxaximab, from Elusys Therapeutics, Inc.

Orchard Therapeutics Limited’s Libmeldy (autologous CD34+ cell enriched population that contains hematopoietic stem and progenitor cells transduced ex vivo using a lentiviral vector encoding the human arylsulfatase A gene) was cleared for the treatment of metachromatic leukodystrophy. This disease is an inherited neurometabolic disorder that causes progressive destruction of the white matter of the brain.

Among the oncology drugs to get EU clearance last year was GlaxoSmithKline plc’s orphan drug Blenrep (belantamab mafodotin), a first-in-class humanized anti-BCMA treatment, which received a conditional approval for relapsed and refractory multiple melanoma. This is the first anti-BCMA therapy to be approved in the EU, according to the company.

Roche’s Rozlytrek (entrectinib), a tumor-agnostic TRK inhibitor, was conditionally approved for treating patients from 12 years of age with solid tumors with an NTRK gene fusion who have no satisfactory treatment options. It was also approved for adults with ROS1-positive, advanced non-small cell lung cancer not previously treated with ROS1 inhibitors.

Sanofi’s Sarclisa (isatuximab) is for treating adults with relapsed and refractory multiple myeloma, in combination with pomalidomide and dexamethasone. Sanofi said the drug was designed to induce programmed tumor cell death and immunomodulatory activity.

Pfizer’s orphan medicine Daurismo (glasdegib), in combination with low-dose cytarabine, was OKd for the treatment of newly diagnosed de novo or secondary acute myeloid leukemia in adults who are not candidates for standard induction chemotherapy.

Calquence (acalabrutinib), from AstraZeneca PLC, is indicated, as monotherapy or in combination with obinutuzumab, for the treatment of adult patients with previously untreated chronic lymphocytic leukemia (CLL). As monotherapy it is also indicated for adult CLL patients who have received at least one prior therapy.

Roche’s Polivy (polatuzumab vedotin), in combination with bendamustine plus rituximab, has a conditional approval as an orphan drug for the treatment of adult patients with relapsed or refractory diffuse large B-cell lymphoma who are not candidates for a hematopoietic stem cell transplant.

Bayer AG’s Nubeqa (darolutamide) is for the treatment of adult men with non-metastatic castration resistant prostate cancer who are at high risk of developing metastatic disease.

The most high-profile of the five vaccines approved last year was of course Pfizer/BioNTech’s Comirnaty for COVID-19 disease, which received a conditional marketing authorization on 21 December. The European Medicines Agency described the product as a “single-stranded, 5’-capped messenger RNA produced using a cell-free in vitro transcription from the corresponding DNA templates, encoding the viral spike (S) protein of SARS-CoV-2.”

Another significant arrival last year was Janssen’s Ebola vaccine, which is composed of two individual vaccine elements, Zabdeno (Ad26.ZEBOV) and Mvabea (MVA-BN-Filo), each of which has its own marketing authorization. Zabdeno is given first, with Mvabea being administered around eight weeks later as a booster.

The Ebola vaccine was approved under exceptional circumstances because Janssen showed that it was not possible to conduct a randomized controlled study to generate comprehensive data. The company must provide the EMA with an update on the collection of effectiveness data on an annual basis.

A cholera vaccine, Vaxchora, from Emergent BioSolutions, Inc., was approved for active immunization against disease caused by Vibrio cholerae serogroup O1 in adults and children aged six years and older.

The other new COVID-19 product authorized in the EU last year was Gilead’s Veklury for the treatment of COVID-19 in adults and adolescents aged 12 years and older with body weight at least 40kg with pneumonia requiring supplemental oxygen. As with Comirnaty, this was a conditional approval.

Elusys Therapeutics’ orphan drug obiltoxaximab (called Anthim in the US and Canada) was authorized for use in combination with appropriate antibacterial drugs for the treatment and post-exposure prophylaxis of inhalational anthrax due to Bacillus anthracis when alternative therapies are inappropriate or unavailable. This was an exceptional circumstances approval because it was not possible to obtain complete information about obiltoxaximab because of the rarity of the disease and for ethical reasons.

Xenleta (lefamulin), from Nabriva Therapeutics plc., is for the treatment of community-acquired pneumonia (CAP) in adults when it is considered inappropriate to use antibacterial agents that are commonly recommended for the initial treatment of CAP or when these have failed.

Shionogi & Co. Ltd.'s Fetcroja (cefiderocol sulfate tosilate) and Merck & Co., Inc.’s Recarbrio (imipenem/cilastatin/relebactam) were both OKd for the treatment of infections due to aerobic Gram-negative organisms in adults with limited treatment options. Relebactam is the NAS in Recarbrio.

Vocabria (cabotegravir), from ViiV Healthcare, is for the treatment of HIV infection in adults who are virologically suppressed (HIV-1 RNA <50 copies/mL) on a stable antiretroviral regimen without present or past evidence of viral resistance to, and no prior virological failure with, agents of the non-nucleoside reverse transcriptase inhibitor and integrase inhibitor class.

In the area of cardiovascular therapeutics, 2020 saw the approval of Novartis’s first-in-class small interfering RNA (siRNA) cholesterol lowering treatment, Leqvio (inclisiran), for the treatment of adults with primary hypercholesterolemia or mixed dyslipidemia. “Using a novel mechanism of action, the treatment has been shown to deliver effective and sustained LDL cholesterol reduction in patients with atherosclerotic cardiovascular disease,” the company said.

Novartis received a conditional approval for its orphan drug Adakveo (crizanlizumab), for preventing recurrent vaso-occlusive crises in patients with sickle cell disease aged 16 years and older. The product can be given as an add on therapy to hydroxyurea/hydroxycarbamide (HU/HC) or as monotherapy in patients for whom HU/HC is inappropriate or inadequate.

Vertex Pharmaceuticals’ Kaftrio (elexacaftor/tezacaftor/ivacaftor) became the first triple combination product for cystic fibrosis in patients aged 12 years and up who are homozygous for the F508del mutation in the cystic fibrosis transmembrane conductance regulator (CFTR) gene or heterozygous for F508del in the CFTR gene with a minimal function (MF) mutation. The EMA said the orphan treatment was “expected to provide a new therapeutic option for many cystic fibrosis patients, including those with MF mutations where no treatment exists.” Elexacaftor is the NAS in the combination.

Celgene Corporation received EU approval for Reblozyl (luspatercept) for transfusion-dependent anemia in adults with myelodysplastic syndromes or beta thalassemia. The orphan-designated product is a recombinant fusion protein consisting of a modified form of the extracellular domain of human activin receptor IIB linked to the human IgG1 Fc domain.

* This article was amended on 21 January to reflect the fact that AveXis became Novartis Gene Therapies in September 2020.