The 2015 Scrip Lifetime Achievement Award was given to Sir Gregory Winter, Master of Trinity College, Cambridge (UK). Founder of Cambridge Antibody Technology (acquired by AstraZeneca), Domantis (acquired by GlaxoSmithKline) and Bicycle Therapeutics, he is best known for his pioneering research into humanizing antibodies. His findings led to the development of the first human antibody, Humira (adalimumab), until very recently the world's top-selling drug. 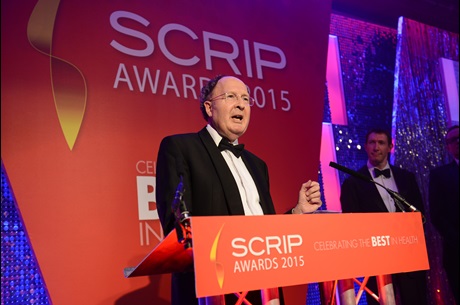 See below for Sir Greg's acceptance speech, delivered at the Scrip Awards ceremony at the Grosvenor House Hotel in London on Dec. 2, 2015.

"This is my first Lifetime Achievement Award, at least in this life. On behalf of myself I am grateful to accept it and to thank the sponsor Medidata, Scrip Awards, those who made the decision and those of you who have made me feel so welcome this evening. However I have been instructed to say a few more words than this…so please bear with me.

Many years ago, before the days of rapid DNA sequencing, my PhD project involved sequencing a protein by digesting it into fragments, fractionating them and sequencing each peptide. I had already used a range of different digests and procedures for peptide fractionation but was missing many of the overlap peptides needed to zip the sequences together. My PhD funding was coming to an end, and I only had time and material for one last throw of the dice. I favoured one strategy for producing the overlap peptides and my supervisor, Professor Brian Hartley, strongly advised another. Inevitably I did it my way, and less inevitably it worked.

I went to tell Brian the good news and was too polite to mention that I had ignored his advice, at least until he said: "Well lad, I am so glad that you came round to my way of thinking."

And then on being corrected, he said "You were very lucky."

He might as well have thrown oil on a fire, and I found myself explaining angrily why my strategy had been both intellectually and practically superior to his. Each time I made a point, Brian said in his bluff Yorkshire accent "Luck" or "You were lucky", like something out of that Monty Python sketch. Finally as I started to froth at mouth, he totally disarmed me, by saying "Lad, calm down: it's much more important to be lucky."

Of course Brian was right. As I look back over a lifetime, I realize just how lucky I have been. I was lucky to work for the Medical Research Council, lucky to work at the MRC Laboratory of Molecular Biology, and lucky to have had Brian Hartley, Fred Sanger and Cesar Milstein as mentors. But sometimes Lady Luck presented herself in strange ways...

With the hindsight of 30 years I now realize how very fortunate I was to be attacked by a criminal in 1984, and to suffer a nerve injury that paralyzed my right arm and took me from the bench as an experimentalist. This forced me to spend several months immersing myself deeply in the structures of enzymes and antibodies using an early computer graphic system. I worked from dawn to dusk and then into the night to the point of total exhaustion. I didn't really want to do it, I would much rather have been working on the bench had I been fit, but it was only by complete mental immersion that I could dull the intense pain from the nerve injury. It was during this time, and due to the deep immersion in protein structure, that I came up the insight of humanizing mouse antibodies by transplanting the antigen-binding loops from rodent monoclonal antibodies into a human antibody.

Again with hindsight of 25 years, I was just so lucky that no established UK company was interested in working with me to develop my ideas of making human antibodies from gene repertoires. Otherwise I wouldn't have had the experience of setting up Cambridge Antibody Technology with David Chiswell, or of raising money from the other side of the planet, or of engaging with all those Australian horse-racing investors. At the time it really didn't seem so lucky, but it all turned out for the good. Perhaps the lesson it is that extreme adversity can provoke innovation, which in turn can strike lucky.

A Lifetime Achievement Award may suggest to some of you that I am finished – a line drawn. Hard luck!

As you know I have helped to found a new company, Bicycle Therapeutics, based on inventions relating to the creation and selection of bicyclic peptides as pharmaceuticals. We think that "bicycles" combine many of the advantages of antibodies and small molecules, and I am hopeful that, after a sufficient dose of adversity, we will strike lucky and the platform will make it big-time. And perhaps in 25 years' time I will be invited back for the Scrip Resurrection Award!