On 26 April 2015, the International Liver Conference, also referred to as EASL, will be convening for its 50th year in Vienna. This year, the organizers offered a new abstract category named “Clinical Trials in Progress”, which gives investigators the opportunity to present information on their ongoing liver research without trial results. The category provides visibility for clinical studies while removing the time consuming process of data analysis typically required for a conference abstract. In light of the milestone conference and this new category, I took a look at the current state of ongoing HCV Phase I-III research conducted by industry sponsors.

As of 13 April 2015, 152 industry trials were ongoing in Trialtrove®.[1] Only 5 evaluate HCV vaccines (data not shown), so I limited this review to the 147 antiviral trials. The majority of ongoing antiviral studies are still recruiting (84/147 trials) and none currently have a status of temporarily closed. Early stage development is limited since only 14% are either Phase I or I/II. Phase II is most common and primarily consists of recruiting trials (Figure 1). 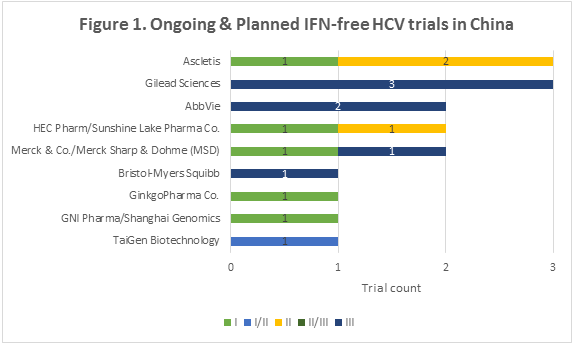 95% of trials involve HCV patients (140/147 trials) rather than healthy volunteers. Patient studies primarily include subjects with HCV genotype 1 (103 trials), which is the most prevalent genotype worldwide[2]. Genotype 1 patients also have the most treatment options for the current wave of direct acting antivirals (DAAs), so it is reassuring to see that a range of target genotypes are also included in Phase II-III trials. A large portion of genotype 1 trials also enroll other genotypes (44/103 trials) and an additional 19 include non-genotype 1 HCV alone (data not shown).

Among the top 5 sponsors, Gilead and Merck are the most active with 33 and 30 studies respectively. Gilead’s ongoing research mostly consists of Phase II trials (20 Phase II and 11 Phase III trials), while Merck’s primary focus is split between Phase II and III (11 trials each). Merck also has the largest number of early stage clinical research among the top 5, but not by much since Phase I and I/II trials are limited across the board. AbbVie’s activity mostly consists of Phase III (12/21 trials), which is double the number of their Phase II trials. The clinical activity for both Johnson & Johnson (J&J) and Bristol-Myers Squibb (BMS) is nearly balanced between Phase II and III. J&J has 8 and 6 ongoing Phase II and III studies, while BMS has 7 and 9 (Figure 2). 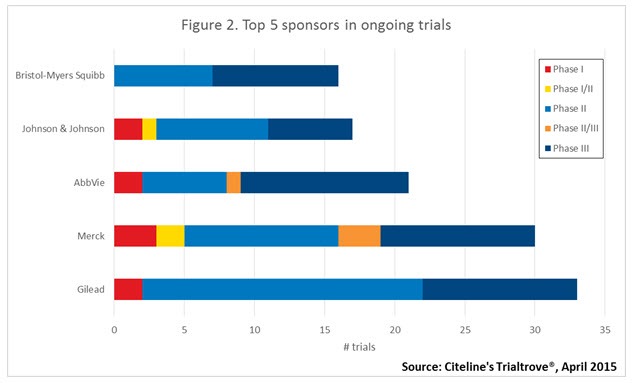 Since Gilead is the most active sponsor, it follows that one of their drugs also tops the list of most commonly evaluated compounds. However, it’s interesting that the already approved sofosbuvir (SOF) is evaluated in 44 ongoing trials (Figure 3) while Gilead is only involved in 33 (Figure 2). SOF, which is already quite successful as the approved Sovaldi®, continues to undergo evaluation with other compounds from Gilead as well as in combination with drugs from other sponsors. Most SOF trials are Gilead sponsored and evaluate the drug as a fixed dose combination (FDC) with ledipasvir as the already approved combination known as Harvoni® or with the yet unnamed GS-5816. Some examples where SOF is co-administered with drugs from other sponsors include Merck’s studies with their FDC of elbasvir + grazoprevir and BMS’ with their FDC of asunaprevir + daclatasvir + beclabuvir (data not shown).

FDCs continue to be of high interest for various reasons. They minimize the pill burden for patients to help increase adherence and in turn, improves drug efficacy. They also ensure that drugs with different mechanisms of action are taken in combination, which reduces development of treatment resistance. Drugs from Gilead and AbbVie were most likely to be evaluated as FDC components, especially GS-5816 which is only being evaluated as a FDC. Merck and BMS compounds are currently evaluated as FDC components for 21-53% of their studies while J&J’s simeprevir (Olysio®) is the only one not included in any FDCs. In all trials, the already approved Olysio® continues to be evaluated in combinations with other DAAs as a standalone drug (Figure 3). 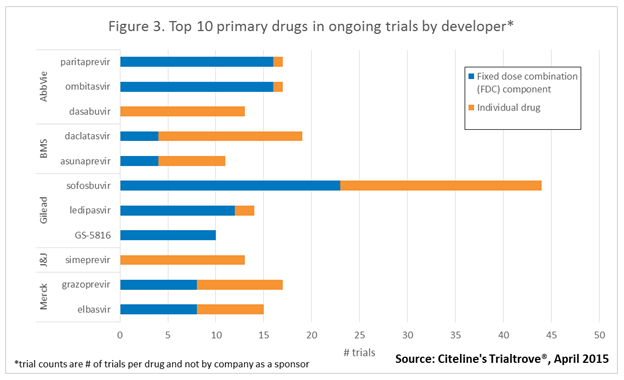 Activity doesn’t appear to be slowing down for HCV research and with high activity in later stage trials, additional treatment options will likely become available to various genotype subsets of HCV patients in the near future. It’ll be interesting to see all the results coming out from the upcoming EASL and continue to watch this exciting space of antiviral research.

[2] An ongoing trial was defined as those with a trial status of Open, Closed, or Temporarily Closed.