A Summary of 2017 Trial Initiations in NAFLD

In the following, I will leverage Trialtrove and Pharmaprojects data to assess 2017 trial initiations focused on non-alcoholic fatty liver disease (NAFLD), including the subtype non-alcoholic steatohepatitis (NASH).  This analysis will include an initial wide glance at the trial landscape, focusing down to industry-sponsored trials in NASH.

As of May 21, 2018, in total there were 89 trial initiations in 2017 focused on the treatment of NAFLD.  Of these trials, 55 percent (49) are industry sponsored trials, representing an increase in industry-sponsored trial starts of 9 percent as compared to the previous year (Figure 1). 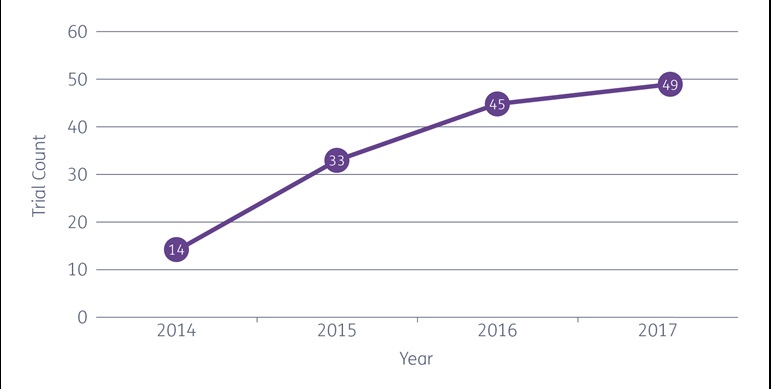 As NAFLD is more prevalent in developed countries, it is not a surprise that the United States is a study site location in 28 of the 49 industry-sponsored trials initiated last year, which is by far the most with Australia next in line with 11 trials.  Also, the United States was the only study location for 31% (15) of industry-sponsored NAFLD trials (Data not shown).

The leading companies for NAFLD activity in 2017 include Pfizer with seven trials, Boehringer Ingelheim with four trials, and Allergan and Enanta, which sponsored three trials each (Figure 2).  Additionally, Gilead, Ionis Pharmaceuticals and Zydus Cadila initiated two trials each (Data not shown).

Moving to later phase activity, saroglitazar from Zydus Cadila, is involved in two trials, a Phase II and III, neither of which are in NASH patients.  Gilead’s two trials focus on NASH, both Phase III and involve the compound selonsertib, including the registration trial, STELLAR 4, in which Gilead announced enrollment completion in February 2018 [[1]].  These trials involving selonsertib represent 40 percent of the industry sponsored Phase III NASH trials initiated in 2017.  Ionis’ two trials are Phase II and involve two different compounds.  One is the angiopoietin-like 3 inhibitor, IONIS-ANGPTL3-LRx and the other is IONIS-DGAT2Rx a DGAT2 inhibitor.

In total there are seven industry-sponsored Phase III trials in the NAFLD space, of which five focus on NASH.  In addition to the four Phase III trials mentioned above, the three remaining trials include two focused on NASH: Conatus Pharmaceuticals’ Phase II/III ENCORE-LF trial involving emricasan and the registration trial, REVERSE involving Genextra/Intercept Pharmaceuticals’ obeticholic acid.  The final trial, TONKA-V3, is sponsored by Vietnam based Nhat Nhat Pharmaceutical Company and involves an unidentified compound focusing on a number of liver function disorders, including NAFLD.  Overall, there are currently nine compounds in Phase III development for the treatment of NAFLD/NASH (Table 1).