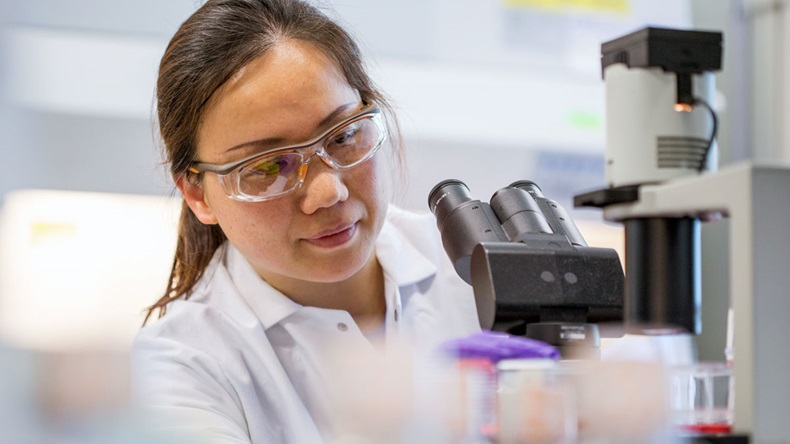 The combination of the first-ever biologic approved for atopic dermatitis and the massive size of the indication's market has raised interest in the disease to new heights, including during the American Academy of Dermatology (AAD) meeting from Feb. 16 to 19 in San Diego.

"The prevalence of the disease seems to be emerging and much higher than we appreciated," Emma Guttman, a dermatologist and a professor at the Icahn School of Medicine at Mount Sinai Medical Center (NY) in New York, said in an interview with Scrip.

Guttman noted recent studies that estimate the prevalence of atopic dermatitis (AD) at 7.3% of adults and teenagers, one-third of which are moderate-to-severe cases, and the prevalence is twice as high in children at 15%. Those are "huge numbers" compared to psoriasis, she said, which is estimated at just 1%-2% of the adult population.

And treating AD has been "revolutionized" by recent US FDA approvals for immune system-targeting therapies, including Pfizer Inc.'s topical PDE4 inhibitor Eucrisa (crisaborole) and the disease's first biologic – Sanofi/Regeneron Pharmaceuticals Inc.'s Dupixent (dupilumab), which targets Interleukin-4 (IL-4) and IL-13. Those drugs will have been on the market for a few years by the time other mechanisms complete their Phase III programs, but competitors are lining up to steal market share.

A 'Revolutionary' Drug For AD
Dupixent is closing in on its first year on the market and the drug has "revolutionized the disease, because up until that point patients didn't have safe treatments for the long term," Guttman said. For moderate to severe AD patients, the IL-4/IL-13 inhibitor replaces less safe topical corticosteroids and calcineurin inhibitors, and the immunosuppressant cyclosporine.

Dermatologists are enthusiastic about Dupixent, but have had pushback from payers when prescribing the medicine, Barclays analysts noted in a Feb. 20 overview of AD data at the AAD meeting. Regeneron and Sanofi launched Dupixent at what was described as a "responsible" $37,000 per year wholesale acquisition cost (WAC) – lower than biologics for psoriasis. (Also see "Atopic Dermatitis Market Snapshot: The Next Multi-Billion Dollar Opportunity" - Scrip, 20 Oct, 2016.)

However, CEO Len Schleifer noted US payers' ongoing hesitance to cover the product's cost during the company's fourth quarter 2017 earnings call earlier this month. Sales jumped 56% from the third quarter to $139m in the fourth quarter, but Schleifer said "the paperwork has gotten frustrating [for prescribers and patients], because I think payers are concerned about the size of this class. And in some cases, they're using their standard tricks" to deny reimbursement.

"Overall, we see real competition to Regeneron/Sanofi’s Dupixent emerging over the next few years, likely producing a situation that gives payers the upper hand in contracting and access negotiations," the Barclays analysts said in their AAD overview report. "It’s still too early, in our view, to formally add competition to our AD market model, but we could see multiple competitors (both orals and large-molecules) by the early 2020s, with potential saturation around that time frame as well."

Three Phase III studies testing Dupixent in AD patients aged six months to 17 years old are under way with data in 12- to 17-year-old patients expected in mid-2018 and submission of a supplemental biologic license application (sBLA) for the treatment of adolescents in the US expected later this year.

Room For Improvement Beyond Dupixent
Guttman told Scrip that "a lot of patients are helped by dupilumab," but noted that "there are people that are not controlled enough by dupilumab, but we have other drugs that are [being] developed now, so I think there is hope for everybody."

Guttman was the lead investigator and AAD late-breaking data presenter for two JAK inhibitors – Eli Lilly & Co.'s baricitinib (developed with Incyte Corp.) and AbbVie Inc.'s upadacitinib. Baricitinib recently was resubmitted for FDA approval in rheumatoid arthritis and is in Phase III for AD, while upadacitinib is moving into Phase III for AD in the first half of this year.

"They seem to be effective. Of course we need long-term data for safety, but in the studies we have done so far through 16 weeks the safety looks acceptable in patients with atopic dermatitis, perhaps more than in other indications, because these patients are young, healthy," Guttman said.

Between Dupixent and the JAK inhibitors as well as emerging agents, such as IL-17 inhibitors, she said that it's "a very exciting time" for the AD field. She noted that JAK inhibitors have potentially better efficacy than Dupixent and are administered orally – a dosing preference for some patients – but said injectable therapy isn't necessarily a turn-off, because some people like less frequent administration.

"We are happy, because finally there are many options for our patients," Guttman said.

Patients in the highest dose group – 4 mg once-daily – reported faster and more pronounced improvements in their symptoms, according to the Barclays analysis, including relief of symptoms like itching and sleep quality.

Lilly and Incyte reported in September that 61% of moderate-to-severe AD patients treated with the daily 4 mg dose of their JAK 1/2 inhibitor plus topical corticosteroids (TCS) achieved a 50% or greater reduction in their Eczema Area and Severity Index (EASI 50) scores at 16 weeks compared with only 37% who received a placebo plus TCS (results for the 2 mg daily dose of baricitinib were not statistically significant).

Upadacitinib Cuts Itch, Feels Pfizer's Burn
AbbVie's upadacitinib data at AAD covered relief from itching and reductions in EASI scores for moderate-to-severe AD patients in the company's Phase IIb study. As with Lilly's baricitinib, AbbVie also reported efficacy results from the mid-stage study for its selective JAK1 inhibitor in September, which showed that 50% of patients treated with 30 mg daily – the highest dose tested – achieved EASI 90 (a 90% improvement) by week 16 versus 2% in the placebo group.

The FDA has granted upadacitinib a breakthrough therapy designation for the treatment of adults with moderate-to-severe atopic dermatitis who are candidate for systemic therapy. But despite the breakthrough designation, the Barclays analysts wrote, "we remain cautious on the safety profile and need to see clean Phase III trials to become fully comfortable." No major new safety signals were reported, but upadacitinib's safety has been questioned in its rheumatoid arthritis trials.
(Also see "AbbVie's New Generation JAK inhibitor Looks Good But CV Specter Looms" - Scrip, 12 Sep, 2017.)

Biomedtracker, an Informa Pharma Intelligence analyst service, gives both upadacitinib and baricitinib a 6% greater than average chance of approval in AD relative to other therapies in similar stages of development for this indication.

Pfizer has the world's first approved JAK inhibitor Xeljanz (tofacitinib) for rheumatoid arthritis and psoriatic arthritis with FDA approval pending for ulcerative colitis; a topical formulation for AD also is in development. The big pharma also has a breakthrough therapy designation for its selective JAK1 inhibitor PF-0496582 in AD, which entered Phase III for that indication in December. That means Pfizer's newer agent is ahead of AbbVie's JAK1, but neck-and-neck with Lilly's JAK1/2 inhibitor.

Other AAD Data Of Note
The next major group of novel therapies to report major milestones in AD will be IL-13 inhibitors, including tralokinumab, an AstraZeneca PLC asset licensed to Leo Pharma AS, which moved into Phase III in June; lebrikizumab, which Dermira Inc. licensed from Roche and began to study in a Phase IIb trial that started in February; and nemolizumab, which Galderma SA licensed from Chugai Pharmaceutical Co. Ltd. and is testing in Phase IIb with results expected later this year. (Also see "AstraZeneca Hands LEO Dermatology Potential" - Scrip, 3 Jul, 2016.) and (Also see "Dermira Takes Roche's Lebrikizumab With Best-In-Class Ambitions" - Scrip, 8 Aug, 2017.) and (Also see "Galderma Steps Into Biologics With Chugai Eczema Antibody" - Scrip, 20 Jul, 2016.)

Pfizer's Eucrisa was the first PDE4 inhibitor approved for AD, but Celgene Corp. discontinued development for its oral PDE4-targeting drug Otezla (apremilast) in the indication in 2016; Otezla is approved to treat psoriasis and psoriatic arthritis. LEO Pharma's LEO 32731 and OPA-15406 from Medimetriks Pharmaceuticals Inc. are in Phase II for AD.

Early-stage AD data presented at AAD for JAK and other mechanisms included:

Phase Ib proof-of-concept data for the JAK/SYK inhibitor ASN002 from Asana BioSciences LLC, which plans to initiate a Phase IIb study in AD soon. EASI 50 was achieved by 100% of patients treated with a 40mg dose once-daily and 88% who got 80 mg daily versus 22% in the placebo group at day 29; EASI 75 was achieved by 50%, 63% and 22% of patients given 40 mg or 80 mg of ASN002 or placebo, respectively. Leerink analysts said in a Feb. 20 review of AAD data that the study's lower dose performed better than the higher dose due to the trial's low number of patients (n=36), according to an investigator.

MorphoSys AG and Galapagos NV reported very early data from their Phase I study for the IL-17c inhibitor MOR106 with 83% of AD patients treated with the highest dose of 10 mg/kg once-weekly (five out of six people) achieving EASI 75 at week four. Across the pooled data for all doses tested (25 AD patients), EASI improved 58% at week four, 62% at week eight, 72% at week 12 and 64% at week 14 versus 32%, 40%, 38% and 50% for placebo at the same times. A Phase II study will be initiated in the first half of 2018. The Barclays analysts noted that safety was "clean" with the exception of the development of some anti-drug antibodies, but they said IL-17c inhibition "is an interesting approach and could be a competitive threat to Dupixent if efficacy and safety holds up in further trials."

New results from the Phase IIa trial for AnaptysBio Inc.'s IL-33 inhibitor ANB020 showed that nine out of 12 patients who received the drug achieved EASI 50 and three achieved EASI 75 at day 15; at day 29, EASI 50 and EASI 75 were reached by 10 and four patients, respectively. Dizziness and headache were the most common adverse events (17% and 25% of the 12 patients, respectively). "Before we make a call on ANB020, we need to see more robust data from the planned Phase IIb trial," the Barclays analysts said; that study is expected to begin in the first half of 2018. "We like the target and think that it could be helpful in treating AD, but it is too early to tell right now."