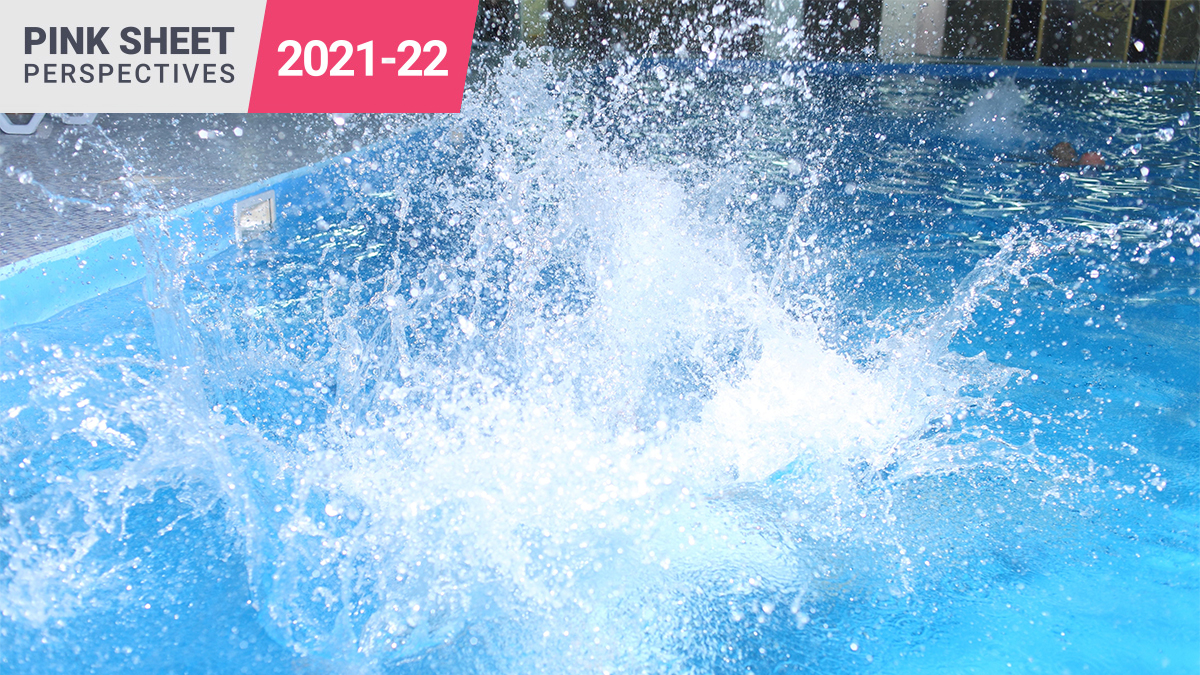 The US FDA’s accelerated approval program has proven a reliable magnet for news coverage, but even so 2021 stands out as particularly dramatic. The agency’s Oncology Center of Excellence undertook a significant review of “dangling” accelerated approvals that resulted in the removal of 13 indications, while at the same time approving 14 novel agents via accelerated approval – a high water mark for the review pathway.

And of course, one of those novel accelerated approvals was Biogen, Inc./Eisai Co., Ltd.’s Aduhelm (aducanumab-avwa), one of the FDA’s most controversial approval decisions ever. (US FDAs Most Controversial Drug Approval Decisions From A To Z)

The accelerated approval program has been around for three decades, with waxing and waning use by new molecular entities and novel biologics. One notable rise can be seen from 2019, when accelerated approvals began gaining ground among novel approvals in terms of both numbers and share of all novel agents. (See graph below)

The Aduhelm debate is the latest (and possibly loudest) illustration of the difficulties of defining, validating and even conceptualizing surrogate endpoints suitable for accelerated approval in neurology, especially in complex and poorly understood conditions like Alzheimer’s disease.

The only other novel neurology product to receive accelerated approval in 2021 was Sarepta Therapeutics, Inc.’s Amondys 45 (casimersen), the third exon-skipping Duchenne muscular dystrophy therapy in a franchise rising from the also-controversial 2016 accelerated approval of the company’s Exondys 51 (eteplirsen) on the basis increases in dystrophin production. (A Matter Of Precedent US FDA Sometimes Labors Under Weight Of Unpopular Or Unfavorable Decisions)

In line with contemporary history, the expedited review pathway was most commonly used in cancer: 11 novel oncologic therapies received accelerated approval in 2021, although Oncopeptides AB’s Pepaxto has already been withdrawn. Those 11 accelerated approvals make up three-quarters of the novel products approved by CDER to treat cancer.

The novel agents that went through accelerated approval have a different profile from CDER’s novel approvals in 2021 overall.

All of the CDER AA indications come from oncology and hematology, including three new indications in the mammoth PD-1/L1 immune checkpoint inhibitor field:

The seven new AA indications did not outweigh the number of withdrawals in 2021 under the FDA’s crackdown on “dangling” accelerated approvals that have not met confirmatory evidence requirements. The initiative, which started with PD-1/L1 checkpoint inhibitors, spread to other classes and has now resulted in nearly 20 withdrawals of indications and products. (See sidebar for related story and table.)

The FDA’s ability to withdraw an accelerated approval if confirmatory trials are not successful, or not conducted, provides the teeth to the policy. Public perception of active enforcement boosts trust (ideally).

In that light, the withdrawal of Oncopeptides’ Pepaxto (melphalan flufenamide) within a year of its accelerated approval is a mark of the success of AA. After identifying an adverse survival trend in the OCEAN confirmatory trial, the FDA set a new record for the fastest time from accelerated approval to withdrawal. (239 Days Oncopeptides Myeloma Drug Pepaxto Comes Off Market Just Months After Accelerated Approval)

The Pepaxto withdrawal came on heels of the action against “dangling” PD-1/L1 inhibitor indications. The FDA’s Oncology Center of Excellence has carefully managed the process, from April’s initial advisory committee review to the online database of accelerated approval requirements maintained under Project Confirm (formerly known as Project Accelerate). (From Accelerate To Confirm US FDA Launches Transparency Program On Cancer Drug Approvals)

“Bringing the community along before an advisory committee is very important,” FDA Oncology Center of Excellence director Richard Pazdur told the recent Prevision Policy/Friends of Cancer Research Biopharma Congress. He noted that the FDA published a paper in the New England Journal of Medicine outlining the issues in advance of the committee meeting.

“Having been through 20 years of accelerated approvals and ODAC meetings, I firmly believe committee members do not understand” the AA program, Pazdur said. “There are so many nuances. And even within our own organization, unless you’re using this on a daily basis, many people trip up on how to apply it.”

Aduhelm: How Not To Do It

And if accelerated approval is tricky to apply in oncology, its application to Alzheimer’s disease – where there is barely any history of therapeutics, let alone a widely accepted and understood surrogate marker – was incendiary.

The furor over the FDA’s accelerated approval of Biogen/Eisai’s Aduhelm has spilled over into a broad US Health and Human Services Office of Inspector General assessment of how the FDA implements the accelerated approval pathway. (Beyond Aduhelm OIG Review Will Put FDAs Entire Accelerated Approval Program Under Microscope)

“You can’t just take what’s been done in oncology and just plop it in neurology,” Pazdur stated. In the cancer field, response rates have been used for 50 to 60 years, he observed. “They’re pretty well vetted.”

“Where I think we got into problems in the Alzheimer’s disease situation was an endpoint that was perhaps not vetted appropriately by the community, where there was a general acceptance that this was an endpoint,” Pazdur said.

Aduhelm was approved for treatment of Alzheimer’s disease on the basis of data showing clearance of amyloid beta plaques in the brain. (Biogen Pledges Aduhelm Confirmatory Data By 2026 Renewing Spotlight On FDAs Lengthy Original Plan)

Tensions were exacerbated by the highly negative advisory committee review of Aduhelm, where accelerated approval was disavowed as an option. (Aducanumab Accelerated Approval Reflects US FDA Flexibility But Raises Doubts About Confirmatory Trial)

Pazdur’s analysis of the current situation is particularly interesting because he was among a number of senior FDA officials who endorsed using the accelerated approval pathway for the product after the advisory committee. (As Aducanumabs US FDA Review Progressed Support Grew For Accelerated Approval)

And even after initial public criticism of the approval, Pazdur remained enthusiastic about Aduhelm and the opportunity it provided to discuss the accelated approval program. (Pazdurcanumab US FDAs Top Cancer Official Weighs In On That Big Neurology Approval)

As the public conversation about Aduhelm’s efficacy, the role of advisory committees, and the initial high price grew heated, the FDA moved swiftly to modify the indication. (FDAs Mismanaged Aduhelm Review What Went Wrong)

Aduhelm’s broad indication for treatment of Alzheimer’s disease approved on 7 June 2021 was revised on 7 July 2021 – just a week after the sponsors submitted a supplemental BLA under the original accelerated approval on 30 June – to emphasize that treatment should be initiated only in patients with mild cognitive impairment or mild dementia stage of disease, the population that started treatment in clinical trials.

The label adjustment, however, was miniscule in the face of the fallout of the Aduhelm approval. Spinoff controversies followed among payers. (Medicare Aduhelm Coverage Policy Overrules FDA Can Two Wrongs Make A Right)

While unfulfilled confirmatory evidence requirements made headlines in 2021, the year did see five conversions of accelerated approvals to full approval. (See table at end of story.)

One is a single-agent claim for PD-L1+ cervical cancer, the other covers the combination of Keytruda with Eisai’s Lenvima (lenvatinib) for endometrial cancer that is not microsatellite instability-high (MSI-H) or dMMR.

Conversions from accelerated to full approval rarely draw the same attention as the original accelerated approval, but the cumulative effect is meaningful. Products that succeed in demonstrating a clinical benefit commensurate with the effect predicted by a surrogate marker build trust that the process can work.

Products that lose accelerated approval because the confirmatory trial failed or was not conducted similarly build trust in the integrity of the regulatory system.

Pazdur, the FDA’s top oncology drugs official, intends to continue to scrutinize dangling accelerated approvals in 2022, holding out the prospect of regular advisory committee reviews of delinquent programs. (Oncology Accelerated Approval Re-Reviews US FDAs Pazdur Is Not Backing Down)

The oncology center is also working to improve the process by encouraging sponsors to come to the FDA early in development with a package of clinical trials to support accelerated approval and confirm clinical benefit rather than with plans to sequentially conduct such studies. (Beyond Aduhelm OIG Review Will Put FDAs Entire Accelerated Approval Program Under Microscope)