AdComm Votes Support the Idea that The FDA is Approving Everything

In August, Forbes’ reporter Matthew Herper penned an article using data from the BioMedTracker database highlighting the unprecedented rate of approval by the U.S. Food & Drug Administration (FDA) for new molecular entity (NME) applications in recent years. In this follow-up analysis we compared how the FDA has been approving NME applications in relation to how advisory committees (AdComms) have voted on their approvability. We decided to compare these two different bodies as it shows the opinions of a group that can most closely be considered peer to the FDA when it comes to reviewing drug applications in the United States. AdComms are convened by the FDA to provide independent advice from outside experts on the quality of drug applications and vote on whether the application should be approved or not. There are a few things to keep in mind when looking at this analysis; there is a provision in PDUFA IV that requires AdComm meetings be held to review NME applications, the FDA usually doesn’t convene AdComms for non-NME applications except in rare instances, and the FDA is not bound by the voting outcome of the AdComm.

The graph below shows results for all FDA approval decisions for NME filings that were preceded by an AdComm vote. 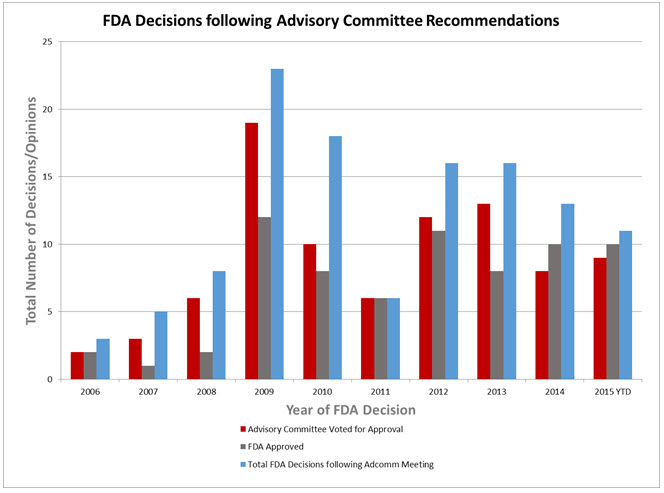 One would expect that if the FDA were seeing higher quality NME applications then positive AdComm opinions would continue to outpace approvals. That is however not the case and the conclusion from this analysis is that the FDA is becoming more lenient when it comes to approving new drugs. All the way back through 2006, the FDA has been more conservative than their AdComm peers when reviewing NME applications. Only in 2006 and 2011 did they approve as many NMEs as AdComms deemed fit for approval. In 2014 that trend reversed and the FDA became more liberal than the AdComm opinions and approved more drugs than the respective committees deemed fit for approval. That trend has continued thus far into 2015, but with four scheduled AdComm meetings planned it remains to be seen if that trend will hold.