Jane Griffiths tells Scrip that rather than reducing Actelion's reliance on PAH, there is still a lot to do in looking at different mechanisms and pathways for the disease and being under the J&J umbrella can only help. 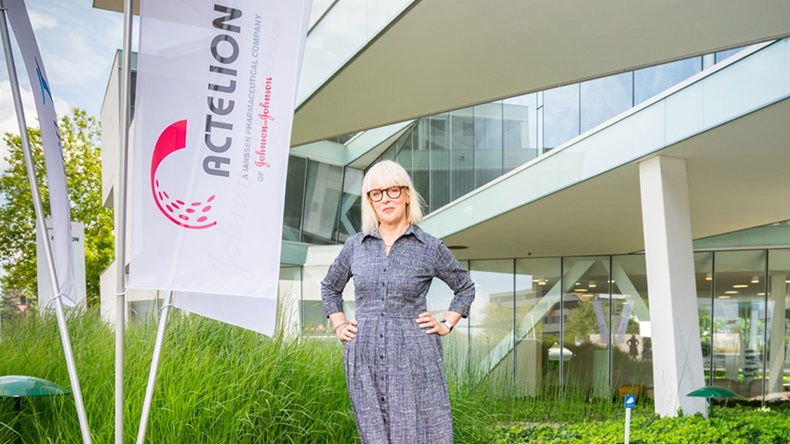 JANE GRIFFITHS IS GUIDING ACTELION AS IT BEGINS LIFE UNDER THE J&J UMBRELLA. Source: Actelion

Actelion Pharmaceuticals Ltd. is clearly a leader in pulmonary arterial hypertension but chief executive Jane Griffiths believes that following the Swiss biotech's acquisition by Johnson & Johnson, there is still a lot of value to be created in that space.

It is six months since Actelion was bought by J&J's Janssen unit in a deal valued at around $30bn and Griffiths took over the reins. A high-profile and well-respected figure in the industry, she joined Johnson & Johnson in 1982 and was most recently company group chairman of Europe, Middle East and Africa (EMEA) for Janssen but this is her first CEO post.

"By nature, I like to do different things; in my everyday life I want to do one thing a week I've never done before, and this is one thing in my career I've never done before," she told Scrip in a recent interview at the J&J Innovation Center in London. Griffiths has also been immersing herself in PAH, "a very nasty disease with huge unmet need and to be involved in what else we can do there is very interesting."

The PAH franchise has been the source of pretty much all of Actelion's revenues since its first drug, the blockbuster Tracleer (bosentan) was launched back in 2001. It is now off-patent but the follow-up products, Opsumit (macitentan) and Uptravi (selexipag) are enjoying healthy growth and consensus estimates of peak sales for both drugs are in the region of $2bn apiece.

Griffiths noted that the PAH assets have had a dramatic effect in tackling the disease with five-year survival increasing from around 32% to 65% but that still leaves a sizeable population that is not receiving the treatment they need.

"There is still a lot to do in PAH," she says and one key area is earlier and better diagnosis. Griffiths said one problem is that the symptoms are not dissimilar to respiratory diseases. "You start with breathlessness, so what do you think – it could be asthma or chronic obstructive pulmonary disease," so patients often start with asthma medication, then after three months they are put on a different one, then they are sent – possibly after a long wait – to a chest physician.

"Before you know where you are, it's a year or 18 months by which time there has been a lot of damage done to your heart," Griffiths said. Therefore, using an easy-to-use diagnostic at point of care – even if it means sending a much smaller population for a right heart catheterization, i.e. to get a definitive PAH diagnosis – would represent a major advance.

The Actelion CEO noted that the company was looking to see if there are start-ups working in this area "but there are lots of things you could look at, whether there is something in the exhaled breath that is different, can you monitor the pressure without invasive tests, some sort of pressure sensor outside your rib cage. We need to think what isn't there now that could exist in the future."

Griffiths added that the goal was to have diagnostic tests and patient monitoring systems that can catch people much earlier "where you intervene in a disease and cost the system less. If you have someone with a chronic condition for 30 years, that's a long time."

As for therapies, "we have got good medicines in an area of unmet need," she noted and there is scope for further growth, adding that in Europe, "access negotiations" for Uptravi are ongoing. Griffiths also pointed out that most patients, if not all, will transition from one medicine, then two and three "but at the moment only 20% are getting that third medicine." Most will need it because as symptoms get worse and patients need a different mechanism to control them, she added.

In the last few years, Actelion has tried to reduce its reliance on PAH and Griffiths told Scrip that such a strategy was perfectly understandable for a smaller company that wants to diversify and spread its risk. However, now it is under the J&J umbrella, a major shift away from its core area of expertise is unlikely.

Griffiths said that despite the advances in PAH, a significant number of people are dying earlier than they should, "so the first thing is to look at what other pathways are involved in PAH which are not addressed by the mechanisms that are currently in place and there are a number that are very interesting and we are looking at those."

Looking At Diseases Allied To PAH

Actelion is going to be exploring new indications and formulations for the current assets. Also, "if something caught our eye that was outside PAH but still addressed the same customer population we would take a look so we can build on our current footprint." Those allied diseases could include pulmonary hypertension and chronic thromboembolic pulmonary hypertension (CTEPH) and as Griffiths told Scrip, "You know what the J&J model is, this innovation center here is all about having teams of scouts investing in very early start-ups and biotechs who are tasked with spotting molecules of interest."

Aside from PAH, Actelion has high hopes for ponesimod, an investigational oral treatment for multiple sclerosis. The Phase III program for the sphingosine-1-phosphate receptor 1 modulator includes a superiority study comparing ponesimod to placebo in subjects with active relapsing MS who are being treated with Biogen Inc.'s blockbuster pill Tecfidera (dimethyl fumarate).

When asked if the compound fits well in Actelion's pipeline, Griffiths noted that "we've got neuroscience in J&J so there is an obvious collaboration there and we are very excited about it." For cadazolid, a quinolonyl-oxazolidinone antibiotic for Clostridium difficile-associated diarrhea which is in Phase III, Actelion is evaluating its options.

And as for the relationship with Idorsia, the new R&D venture set up by Actelion founder Jean-Paul Clozel with the earlier-stage assets left over from the $30bn acquisition, Griffiths said there are transition agreements in place, providing services both ways, and a lot of obvious informal links given that many Idorsia staff have come from Actelion - They are next door, we share their canteen, and there's a lot of respect." Last week, J&J agreed to pay $230m to Idorsia Pharmaceuticals Ltd. to co-develop the latter's investigational hypertension drug aprocitentan, a metabolite of Opsumit.

Interesting times for the new boss and Griffiths told Scrip, "A big part of my job is to show our people what benefits J&J will bring to their organization at this point in its life. It is 'a big small' company that needed to make that transition and having a ready-made big company to tap into that has the resources you need is a good thing."

J&J has paid a hefty price for Actelion but Griffiths concluded by saying: "You buy the assets but you also buy a group of very talented people who we acknowledge as absolute leaders in this space. Their relationship with the key opinion leaders in PAH is very tight and over the last 20 years these physicians have grown up with Actelion and that closeness to the patient, the disease, the science and the customer is highly valued by us."