REDUCE-IT enrolled a higher risk group than the broad population targeted by Amarin’s proposed indication statement, agency says; although reviewers conclude an interaction between the mineral oil placebo and statins cannot be excluded, any impact would have been small and unlikely to change overall treatment effect. 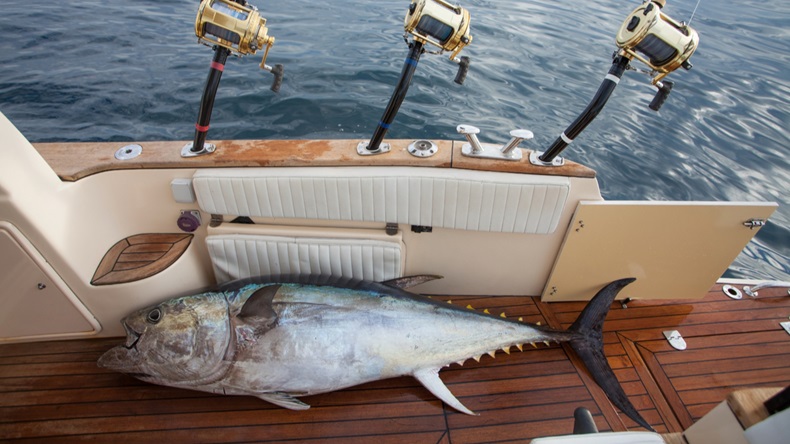 AMARIN IS HOPING TO FINALLY REEL IN THE BIG INDICATION FOR ITS FISH OIL-DERIVED DRUG VASCEPA Source: Shutterstock

Heading into a pivotal advisory committee meeting for Amarin Corp. PLC’s Vascepa (icosapant ethyl), the US Food and Drug Administration is questioning whether the REDUCE-IT cardiovascular outcomes trial results support the breadth of the CV risk reduction indication sought by the sponsor.

In a briefing document released ahead of a 14 November meeting of the Endocrinologic and Metabolic Drugs Advisory Committee, the agency said the REDUCE-IT inclusion criteria represented a narrower population than the proposed indication, and the enrolled population constituted an even narrower, higher risk group. (See box below) 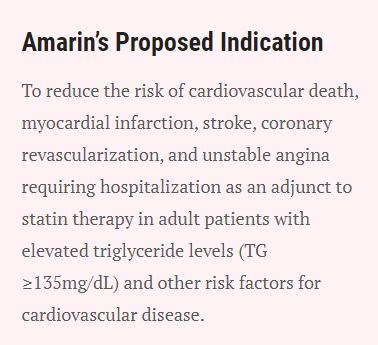 “There is no evidence in REDUCE-IT that AMR101 [Vascepa] is the appropriate therapy in lower-risk patients who may have elevated LDL-C in addition to mild hypertriglyceridemia and who would benefit from optimization of statin therapy first,” the agency said.

Although the agency discusses the potential concern that the mineral oil placebo in REDUCE-IT may have interfered with background statin therapy and contributed to the positive results seen in the Vascepa arm, it concludes any such interaction would have been small and unlikely to change the overall treatment effect.

In addition, the agency’s discussion of safety suggests that the increased risk of bleeding and atrial fibrillation/atrial flutter seen in REDUCE-IT will not be a bar to expanding Vascepa’s indication.

AdComm Questions
The agency presents the advisory committee with a single voting question on Vascepa’s labeling expansion. (See box below) 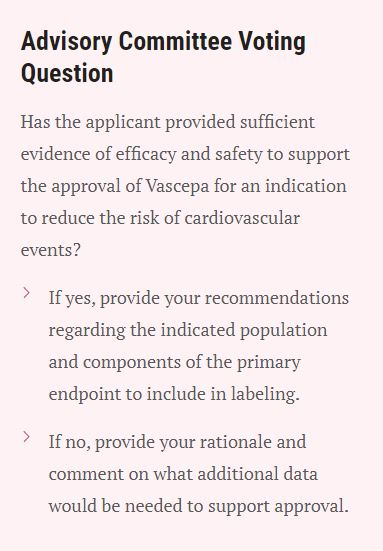 However, this vote will be preceded by three sets of discussion questions.

Panelists will be asked to discuss their interpretation of the efficacy results from REDUCE-IT. This includes the overall strengths and limitations of the data, “including the use of a single trial to support a first-in-class cardiovascular outcomes indication and robustness of the results,” the draft questions state.

The agency also seeks discussion on the level of concern about atrial fibrillation and bleeding events seen in REDUCE-IT “and whether labeling can reasonably manage these risks.”

The third discussion question focuses on the intended patient population. The agency will ask the panel to discuss the population – beyond the subset of patients with established CV disease – for whom the REDUCE-IT data provide evidence of CV risk benefit. The discussion should address a host of factors, including:

A Long Journey Brings A Successful Trial
Vascepa, a purified ethyl ester of eicosapentaenoic acid derived from fish oil, has been approved since July 2012 to reduce triglyceride levels in adult patients with severe (≥500mg/dL) hypertriglyceridemia.

However, Amarin’s bid to secure approval for the considerably broader indication of patients with persistently high triglyceride levels on statin background therapy has been a decade-long journey marked by a negative advisory committee review in 2013, a rescinded Special Protocol Assessment, a successful First Amendment lawsuit against the FDA, and a late-announced advisory committee review of the REDUCE-IT results.

In the briefing document released on 12 November, the agency appears to take no issue with the REDUCE-IT trial’s overall results.

Compared to placebo, Vascepa reduced the risk of the primary endpoint – a composite of CV death, nonfatal myocardial infarction, nonfatal stroke, unstable angina requiring hospitalization and coronary revascularization – by 25%, a statistically significant finding. The absolute risk reduction in the study population was 4.7% and the number needed to treat (NNT) was 21.

Amarin’s drug reduced the risk of the individual components of the primary endpoint and secondary composite endpoints, and all results were statistically significant per the prespecified testing plan except for the final endpoint in the hierarchy, all-cause mortality, which trended favorably for Vascepa. The primary endpoint results were consistent across multiple subgroups.

Pursuing A Broader Population Than In REDUCE-IT
Nevertheless, the agency’s decision to convene its external experts could be explained by its apparent discomfort with the very large population that would be encompassed by Amarin’s proposed indication for CV risk reduction, and what it sees as a potential disconnect between the requested indication and the REDUCE-IT population.

“This proposed indication has never been approved for any other lipid-altering drug and would have the potential to impact the health of a large portion of the US population at risk for CV events, who would be eligible for therapy as an adjunct to their current medical regimen,” John Sharretts, acting deputy director of the Division of Metabolism and Endocrinology Products, said in a memo included in the agency’s briefing document.

Amarin has said that if its supplemental new drug application were approved by the 28 December user fee date, Vascepa would be the first drug indicated to reduce residual CV risk in patients whose LDL-cholesterol is managed with a statin but still experience persistent elevated triglycerides (135mg/dL or greater), “a serious health challenge affecting an estimated 15+ million adults nationwide.”

“The applicant uses the terms 'Primary Prevention Cohort' to describe Risk Cohort 2, but this term is a misnomer,” the FDA’s briefing document states. “Review of the dataset revealed that some patients in the cohort had established CVD by history, although the precise number is unclear.”

Overall, the larger risk cohort with established CV disease had higher event rates for both the composite endpoints and their components compared with the smaller risk cohort, the agency said.

In the Vascepa arm, “the effect size for the primary endpoint was numerically lower for Risk Cohort 2 versus Risk Cohort 1, but the confidence intervals overlap: 12% estimated risk reduction vs. 27%, respectively,” the FDA said. “The 95% CI for the HR for Risk Cohort 2 included 1.0.”

The agency said the trial provides strong evidence that Vascepa is beneficial in patients with established CV disease and persistently elevated triglycerides despite optimized statin therapy. “While it appears that AMR101 is also beneficial in a subset of patients aged 50 or greater with diabetes, additional CV risk factors and hypertriglyceridemia (despite optimized statin therapy), it is arguable how broadly this second population should be drawn.”

The FDA said the planned population in REDUCE-IT had several key inclusion criteria that make it considerably narrower than the proposed indicated population. These include: fasting triglycerides >200mg/dL; LDL-C >40mg/dL but <100mg/dL on stable statin therapy; and established CV disease or high risk for CV disease.

Baseline characteristics suggest that the actual trial population was even narrower than originally defined, the agency said. “Most patients in Cohort 2 had diabetes plus at least two additional risk factors, as defined. Additionally, the rate of established CVD in the diabetes cohort was not insignificant, including patients with prior MI, stroke and revascularization.”

The agency also takes issue with the triglyceride threshold in Amarin’s proposed indication.

Not only did most patients in REDUCE-IT have baseline triglycerides of 200mg/dL or greater, “approximately 72% were 175mg/dL or greater, significantly higher than the proposed threshold of 135mg/dL. More importantly, these triglyceride levels were achieved in a population in which 88% of patients were on either moderate- or high-intensity statin therapy with adequate control of LDL-C.”

“In summary, the trial population represents a higher risk group than the proposed indicated population, encompassing patients with diabetes and additional risk factors, and hypertriglyceridemia despite optimized statin therapy,” the agency said.

The Mineral Oil Hypothesis
Although REDUCE-IT demonstrated a significant benefit on CV outcomes, the pattern of lipid and inflammatory biomarkers measured during the trial raises questions about internal validity, Sharretts’ memo states.

In the placebo arm, several biomarkers of CV disease increased, including LDL-C and high-sensitivity CRP.

Release of the REDUCE-IT results in November 2018 prompted questions as to whether the mineral oil placebo influenced these biomarker changes, such as by interfering with statin absorption, resulting in an overestimation of Vascepa’s treatment effect. (Also see "Amarin's REDUCE-IT Data For Vascepa May Be Game-Changing, But Not Without Controversy" - Scrip, 12 Nov, 2018.)

In Amarin’s briefing document, the company said it does not agree that placebo caused an overestimation of the REDUCE-IT results. “Even if we are wrong, such potential influence cannot reasonably be estimated to account for a substantial portion of overall robust and consistent REDUCE-IT findings, including a 25% [relative risk reduction] in the primary endpoint.”

Even if the mineral oil placebo impacted the trial results, “such potential influence cannot reasonably be estimated to account for a substantial portion of overall robust and consistent REDUCE-IT findings, including a 25% [relative risk reduction] in the primary endpoint.” – Amarin
The agency said a significant interaction between mineral oil and statins cannot be excluded when the two are co-administered. Data from across the Vascepa clinical program reinforce the notion that decreased absorption of statin medications, rather than a direct effect of the mineral oil itself, could help explain the elevation of lipid and inflammatory markers, the agency said.

“Additionally, LDL-C had much less fluctuation from baseline in the AMR101 arms of these three clinical trials (-4.5%, 1.5%, and 2.8% change from baseline in MARINE, ANCHOR and REDUCE-IT, respectively),” the agency said. “This phenomenon suggests that the LDL-C increase from baseline observed in the mineral oil groups of REDUCE-IT and ANCHOR could perhaps be statin-dependent, an indicator of potential drug-drug interaction between mineral oil and statin.”

Nevertheless, the agency estimated that the median increase of 10-13% LDL-C from baseline observed in REDUCE-IT would only increase CV risk by approximately 3%. “This small increase of risk appears numerically small and is unlikely to change the overall treatment effect direction,” the agency said.

“The Vascepa label states that some studies with omega-3 fatty acids have demonstrated prolongation of bleeding time (in vitro), but this finding has not been previously associated with clinical bleeding episodes to our knowledge,” Sharretts’ memo states.

Notably, the observed increase in atrial fibrillation or atrial flutter had minimal apparent effect on stroke, as there were fewer adjudicated stroke events with Vascepa than in the placebo group.

“The increased incidence of AF in REDUCE-IT is a concerning safety signal, especially in the intended population with elevated baseline risk for AF,” an FDA cardiology consult review states.

Nevertheless, “given the strength and consistency of the finding of reduction of major adverse cardiovascular events in REDUCE-IT, the benefit-risk assessment favors the use of Vascepa for CVD risk reduction in the intended population with caution regarding a potential increase in risk of AF,” the consult states.