The underlying causes for cognitive and functional symptoms associated with Alzheimer’s disease (AD) have been explained by the amyloid hypothesis, whereby the aggregation of beta amyloid plaques lead to dementia. As a result, the beta amyloid protein has become a major target for disease-modifying treatments in AD. Unfortunately, there was a 99.6% failure rate for all AD drug candidates between 2002 and 2012 [1] and several large Phase III trials for anti-amyloid drugs failed due to lack of efficacy. [2] Despite these setbacks, key insights into better clinical trial design were gained for this complex and debilitating disease. With updated guidelines on the inclusion of earlier stage subjects, addition of biomarkers, and use of novel tools to evaluate cognition, the paradigm for clinical trials in AD has shifted. [3] [4] This blog explores the state of development for amyloid targeting therapies today.

In contrast, the secretase inhibitors have much higher rates of discontinued drugs and treatments that have not reported development (gamma secretase, 82%; beta secretase, 81%). Since the accumulation of amyloid in the brain begins years before the first symptoms of cognitive impairment, blocking secretase activities may come too late for patients already diagnosed with dementia due to AD. Also, gamma secretases have been shown to have off-target effects, particularly on Notch signaling. [7] 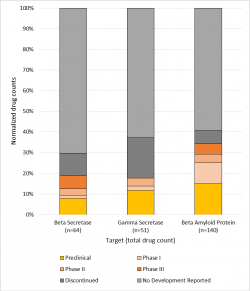 Major ongoing clinical trials for amyloid targeting drugs are depicted in Table 1. The paradigm shift in trial design to include prodromal AD patients following the early 2013 FDA draft guidance [8] is apparent. Primary outcomes for trials including prodromal patients follow a single composite measure while trials enrolling patients with only mild or mild-to-moderate dementia due to AD still include separate outcomes for cognition and function.

There is also a shift to a yet earlier stage in the AD spectrum to individuals who have preclinical AD. This patient group may be divided into two categories: asymptomatic ‘at risk’ individuals with evidence of amyloid accumulation (generally through cerebral spinal fluid tests or PET imaging) and pre-symptomatic individuals who are ‘at risk’ due to an autosomal dominant genetic mutation. [9] Therapies targeting both beta amyloid protein and beta secretase are being evaluated in these earlier stage disease trials, demonstrating a continued interest in the development of various targets within the amyloid pathway. 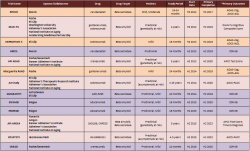 Trials evaluating preclinical AD patients require longer timeframes to demonstrate a clinically meaningful effect on primary outcomes. Sharing trial responsibility between industry and non-industry entities may help to alleviate the high cost and resource burden for these longer trials, as seen in nearly all major preclinical AD studies. An exception to this collaborative sponsorship is a Phase II/III study for JNJ-54861911, a beta secretase inhibitor, which is being solely conducted by J&J/Janssen R&D.

Ultimately, delaying the onset of disease symptoms is the ideal endpoint for secondary prevention trials. Following this notion, the API APOE4 trial evaluates time to diagnosis as a co-primary endpoint. This trial does, however, include the surrogate Alzheimer’s Prevention Initiative Composite Cognitive (APCC) test score, which may help shorten the primary outcome timeframe to a more reasonable duration. The APCC test score is being used by a separate study also enrolling individuals who are genetically at risk, the API ADAD trial, whereas The Alzheimer Disease Cooperative Study Preclinical Alzheimer Cognitive Composite (ADCS-PACC) is being used in two studies enrolling asymptomatic individuals who are at risk of AD.

AD drug development has been marked by many disappointing top-line clinical trial results. Indeed, AD is among Trialtrove’s top ten diseases with the largest number of industry-sponsored trials demonstrating negative outcomes (Phases I – III). Rather than abandon hope, deeper analyses of data from failed trials have helped to shape a new approach to the clinical development of Alzheimer’s treatments. Accordingly, the current clinical landscape still includes AD candidates for multiple targets in the amyloid pathway, however, impacts from the paradigm shift are reflected in the design of current AD trials. Collaborations between cooperatives, academics, and industry ensure a shared investment and impart optimism in finding the first successful disease-modifying treatments for AD.

To read more about the overall landscape in early stage AD research, and see a preview of Citeline’s upcoming presentation to be delivered at February’s SCOPE conference, click here

[4] Albert et al. (2011) The diagnosis of mild cognitive impairment due to Alzheimer’s disease: Recommendations from the National Institute on Aging-Alzheimer’s Association workgroups on diagnostic guidelines for Alzheimer’s disease. Alzheimers Dement. 2011 May;7(3):270-9.

[6] Drugs are designated as “No Development Reported” when ongoing development can no longer be confirmed in the public domain.