Every year the Informa Pharma Intelligence experts analyze the finding that come out during the ASCO annual conference. This year we are delighted to have Dr. Peter Lee from City of Hope Comprehensive Cancer Center weighing in with our analysts on the key takeaways from this year’s conference, its winners and losers, and examine the implications for the future oncology treatment landscape. 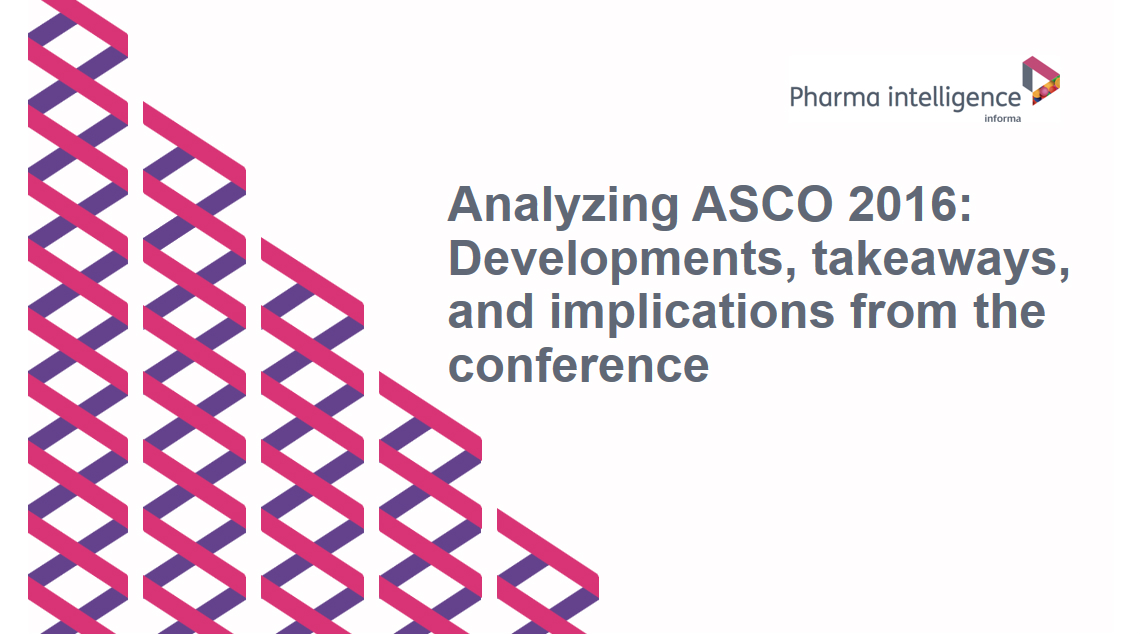 This session is hosted by Mary Jo Laffler our US Head of Commercial Content. She is joined by:

Ally Bruce is a Principal Analyst in Oncology and is part of the Citeline team. She has been an Analyst with the group for over a decade, with experience in Oncology, CNS, and Analytics. Prior to Citeline, she was a healthcare consultant in Cambridge, MA, and spent several years coordinating clinical trials in the Psychopharmacology Unit at Tufts Medical School.

Zachary McLellan is an Analyst with Datamonitor Healthcare specializing in the coverage of breast and gynecological malignancies. Zachary has a M.Sc. In Biotechnology and Entrepreneurship from New York University and worked as a chemist prior to joining Informa.

Robert Jeng is a Senior Scientific Analyst overseeing BioMedTracker’s oncology coverage for the past 5 years. Before joining Informa, Robert was a cell biologist who earned his Ph.D. from Stanford University before working as a postdoctoral researcher at Berkeley and a staff scientist at the Sanford-Burnham Institute specializing in cytoskeletal dynamics.

The focus of his research is on understanding how cancer impacts host immune responses in patients, with the goal of developing novel treatments to restore/enhance immune function in cancer patients. His group aims to dissect the complex interplay between immune/stromal cells and cancer cells within tumors, tumor-draining lymph nodes (TDLNs), and blood using experimental and systems biology approaches. His group has shown that lymphocytes from patients with breast cancer, melanoma, and colorectal cancer develop immune signaling defects that blunt their proliferation and function in vivo. He is also extending these findings in multiple directions, including to other human cancers such as prostate cancer and leukemia.

Dr. Lee has published over 50 articles in journals such as Nature Medicine, Proceedings of the National Academy of Science (PNAS), Public Library of Science (PLoS), Medicine, and received many awards, including elected member of the American Society for Clinical Investigation, Department of Defense Era of Hope Scholar Award for Breast Cancer Research, American Cancer Society Research Scholar, and the Damon Runyon Scholar Award. While a fellow at UCSF, Dr. Lee invented the MucoCept technology.