Another Alzheimer's Setback As Roche And Lilly Drugs Fail 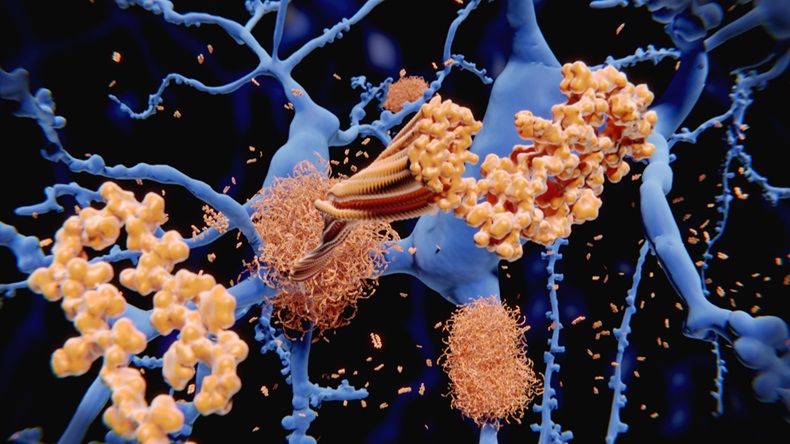 AMYLOID HYPOTHESIS UNDER THE MICROSCOPE AGAIN

The theory that beta-amyloid (Abeta) is the main cause of Alzheimer's has taken yet another bashing after a closely watched trial evaluating Eli Lilly & Co.'s solanezumab andRoche's gantenerumab in people in the early stages of a rare, inherited form of the disease yielded disappointing results.

The Phase II/III Dominantly Inherited Alzheimer Network Trials Unit (DIAN-TU) study run by Washington University evaluated the two drugs, which have both suffered failures in a variety of disease settings, in 194 people with autosomal dominant Alzheimer's disease who come from families that carry a genetic mutation that causes early-onset Alzheimer’s dementia. Such people experience declines in memory and thinking skills starting in their 50s, 40s or even 30s and researchers noted that people who inherit the mutation were "all but guaranteed to develop symptoms at about the same age their parents did."

The participants were randomly assigned to receive solanezumab, gantenerumab or placebo and the initial analysis indicated that neither drug met the primary outcome of the study, the slowing of cognitive decline as measured by "multiple tests of thinking and memory." Details of DIAN-TU will be presented in April at the Advances in Alzheimer’s and Parkinson’s Therapies meeting in Vienna, Austria.

“Although the drugs we evaluated were not successful, the trial will move us forward in understanding Alzheimer’s,” said principal investigator Randall Bateman. He argued that the trial’s innovative design, developed with a consortium of pharmaceutical companies, the National Institutes of Health, regulatory agencies and academic leaders, yielded new insight which can inform future research into the disease, including the more common form that typically strikes after age 65.

The results of the trial, which was conducted at 24 sites in Australia, Canada, France, Spain, the UK and the US, has not come as a great surprise, given that the Alzheimer's space is littered with failures, not least for the two anti-Abeta antibodies used in the study. Investors had pretty much written off the chances for both subcutaneous gantenerumab and intravenous solanezumab but interest in the amyloid hypothesis was renewed at the end of last year when Biogen Inc. announced a stunning about-face to pursue US Food and Drug Administration approval for its previously discontinued Abeta drug aducanumab. (Also see "An About Face As Biogen Says It Will File Aducanumab In Alzheimer’s " - Scrip, 22 Oct, 2019.)

Despite the DIAN-TU miss, Roche remains bullish about the prospects for its drug. Chief medical officer Levi Garraway argued that given the "experimental nature" of the study, "we are unable to draw firm conclusions about the impact of gantenerumab in autosomal-dominant Alzheimer's," which only accounts for less than 1% of all cases of the disease.

He added that "this outcome does not reduce our confidence in the ongoing Phase III GRADUATE clinical program,” That consists of two large global Phase III studies in the broader population of people with disease that is not directly caused by gene mutations, sporadic Alzheimer's, and they are due to read out in 2022.

Roche noted that every person who received gantenerumab in DIAN-TU-001 started on a lower dose and only started titrating to a five-fold higher target dose halfway through the trial. However, the GRADUATE studies "have been designed from the outset to maximize exposure to gantenerumab, bringing all patients to target dose with minimal or no dose interruption within the study period," the company added.

Analysts at Jefferies issued a note in 10 February saying that while DIAN-TU was a small trial "and initially used perhaps suboptimal doses," the trial "again suggests the ongoing gantenerumab Phase III studies are high risk." They added that although the Scarlet RoAD Phase III trial evaluating subcutaneous gantenerumab in prodromal Alzheimer's was stopped early for futility, "subsequent exploratory analyses suggested a dose-dependent effect on clinical and biomarker endpoints, indicating that higher dosing could be required for clinical efficacy. Data from open-label extension studies have lent support to this thesis." (Also see "Open-Label Extensions The Key To Gantenerumab Success, Stresses Roche" - Scrip, 26 Apr, 2019.)

As for Lilly, the firm said that it would not pursue a regulatory submission for solanezumab for autosomal dominant Alzheimer's, but stressed that the outcome of DIAN-TU would not impact the ongoing solanezumab Anti-Amyloid Treatment in Asymptomatic Alzheimer's (A4) study. That trial is in older individuals who have evidence of amyloid in their brains, but do not show symptoms of memory impairment. (Also see "Lilly To Bring Forward Alzheimer’s Readout " - Scrip, 19 Dec, 2019.)

Analysts at Mizuho Securities noted that while Alzheimer’s had been "an extremely difficult disease for successful drug development and we do not have any revenues for solanezumab in our Lilly model, we believe some investors had been cautiously optimistic on a positive outcome." However, "we were not optimistic on this trial given it was a relatively small trial and in a more severe form of the disease."

In addition, the broker also pointed out the higher dose was not implemented until mid-late 2017, after an earlier solanezumab trial failed, "and it turns out only about 25% of the dosing in the trial was done with the higher dose." Mizuho said that while the news was a disappointment, "we are encouraged by the multi-pronged approach Lilly is taking in Alzheimer’s," citing donanemab, a humanized IgG1 monoclonal antibody targeting N3pG-amyloid beta for which Phase II data are expected late 2020 or early 2021, and zagotenemab a tau antibody, Phase II results for which should read out next year.

Any Impact On Biogen's Aducanumab Filing?

Now the focus will return to Biogen and partner Eisai Co. Ltd.'s aducanumab. Observers will be keen to see whether the DIAN-TU blow to the amyloid hypothesis will have much of an influence on how the FDA responds to the submission of the conflicting clinical trial data on the controversial drug that is set to land on the agency's desk in the near future. (Also see "Biogen Is Putting Its Money Where Its Mouth Is – Behind The Launch Of Aducanumab " - Scrip, 30 Jan, 2020.)

Evercore ISI analyst Umer Raffat does not think there will be any effect. He said in an investor note on 10 February that the readout "does not change our opinion of Biogen's aducanumab approval odds," adding that while the aducanumab data "has major issues…I do think FDA approval is likely."

William Blair analyst Matt Phipps issued a note saying that while the DIAN-TU results are discouraging for the amyloid hypothesis, "at this point we believe the effect on aducanumab will be minimal given the regulatory review will come down to the FDA’s interpretation of the subgroup analysis from the ENGAGE and EMERGE trials and any political pressures that come into play during the review process."

He added, "Biogen will argue aducanumab has shown a different clinical profile than solanezumab and gantenerumab across all studies to date, and therefore no comparisons can be made. We do believe solanezumab has a much different binding profile and mechanism of action, and therefore has little read-through to aducanumab, but gantenerumab, if dosed properly, has potential to result in similar target engagement in the cerebrospinal fluid."

Over at Baird, analyst Brian Skorney pulled no punches. In a 10 February note, he said, "We now need more than two hands to count the number of times a beta-amyloid antibody has failed to slow Alzheimer's progression in Phase III, as the DIAN-TU study failed to benefit from a more homogeneous patient population despite the administration of much higher than previously tested doses over longer durations than ever explored." He noted that the EMERGE trial "is the only result with an argument of positivity and we would dispute it is even that."