With one in 68 children identified with Autism Spectrum Disorder (ASD)[i] in the US and 67 million individuals worldwide (more than diabetes, cancer and AIDs combined)[ii], no cure and few treatment options available, let’s all recommit today to supporting Autism research.

Autism spectrum disorder (ASD) is a neurological and developmental disorder that affects a person’s ability to communicate, form relationships and respond appropriately to the environment. The behavioral symptoms include aggression, agitation, disruptive behavior, irritability and repetitive, compulsive behavior. Males are four times more likely than females to develop ASD and 20-30% of children with ASD develop epilepsy by the time they reach adulthood.[iii] ASD patients develop the disorder in early childhood and have a long road of treatments ahead. Treatment includes medications to control symptoms, as well as behavior and communication therapies.

Casting a light on the clinical development of new therapies for ASD, we see a glaring need for a catalyst to drive new research. According to Citeline’s Trialtrove, there are only 17ongoing industry sponsored ASD clinical trials worldwide. Slightly more than half of these trials (53%) are located in the US. This is very surprising, considering the number of people with ASD. It is a global health issue and should thus be solved by the entire international research community.

In Figure 1, we see the breakdown of these trials by sponsor. Otsuka is the top sponsor with three ongoing trials, followed by Eli Lilly and Roche with two. Five of these trials are Phase III and another five are phase IV. Looking at the global status on ASD drugs in Citeline’s Pharmaprojects (Figure 2); two ASD drugs have launched and 32 are coming down the pipeline. 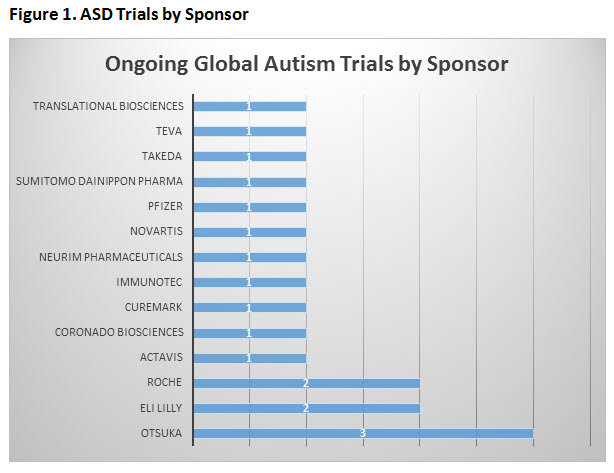 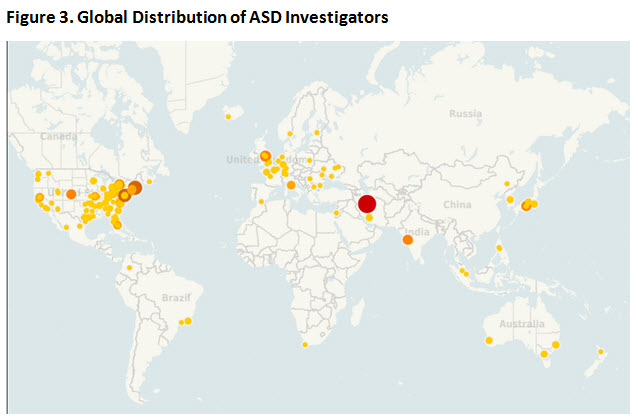 Let’s continue to shine a light on Autism throughout 2015 by supporting autism research.

Thank you for reading my blog and if you feel compelled to support Autism research, to support the children who show such amazing courage every day and their families’ odyssey for a cure, please visit https://www.autismspeaks.org/ways-give.

We only have pieces of information about ASD and we do not know what causes this disorder. UC San Diego, one of the eight ‘Autism Center of Excellence’, has a nice summary of the research being done to discover the causes (click here to read more). For more information on ASD and research developments go to: