Alex Azar was confirmed as the next secretary of Health and Human Services with strong industry support. Azar comes to the role with some homework to do on key FDA medtech policies, but has expressed support for risk-based regulation of lab-developed tests and cost-saving bundled-payment models. 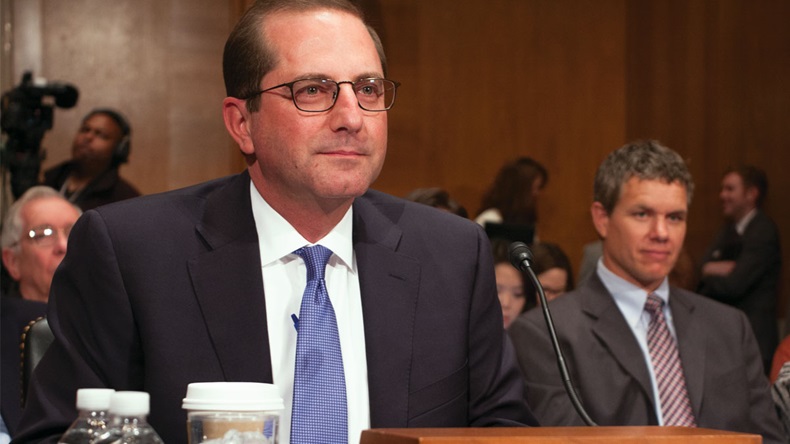 ALEX AZAR WAS APPROVED BY THE SENATE TO BE HHS SECRETARY JAN. 24       Source: Ferdous Al Faruque

The device industry gave its warm support Jan. 24 to the incoming US secretary of Health and Human Services, Alex Azar, who was confirmed by the Senate Jan. 24 in a 55-43 vote.

Azar is a former drug industry executive at Eli Lilly & Co., and a former HHS official during the George W. Bush administration.

Azar "has demonstrated his depth of knowledge on a wide range of crucial health care issues facing the country and his willingness to address these challenges on," Whitaker said.

"We are committed to working with [Azar] to expedite patient and provider access to cures and therapies developed by medical technology innovators," added Medical Device Manufacturers Association President and CEO Mark Leahey. "Numerous challenges continue to face our nation's health-care delivery system, and our industry stands ready to work with Mr. Azar."

As HHS chief, Azar will oversee dozens of agencies, including US FDA and the Medicare system. He did not provide in-depth detail in response to congressional questions on many medtech-specific issues, but he did suggest engagement on the issue of laboratory-developed test (LDT) regulation.

Azar responded to a series of written "Questions For the Record" (QFRs) from Senate Health, Education, Labor and Pensions Committee Ranking Member Patty Murray, D-Wash., earlier this month, including on the topic of precision medicine. In one instance, Sen. Murray stated that some laboratory tests now being marketed to physicians and patients "have no real clinical meaning," according to the questions and responses provided to Medtech Insight.

She asked: "Are you committed to supporting a regulatory framework that would give patients and their providers confidence in the quality and veracity of their tests, and level the playing field for innovators?"

Azar responded: "LDTs play a critical role in patient care, and it is important for both patients and their health-care providers to have confidence in these tests.

"If confirmed, I will work closely with [CMS] Administrator Verma and [FDA] Commissioner Gottlieb to ensure we have a risk-based regulatory approach that supports patient access to reliable tests and advancing innovations in the area, on behalf of patients," he added.

Gottlieb has already gone on record in support of a new regulatory framework for LDTs, and has said he wants to see Congress address the issue. (Also see "US FDA Chief Favors LDT Approach In Bucshon-DeGette Bill" - Medtech Insight, 30 Nov, 2017.)

In other responses to Murray's questions, Azar suggested he has some homework to do on some central policy issues for the device industry, including the National Evaluation System for Health Technology (NEST) for support of pre-market reviews, and post-market surveillance activities.

On NEST, Azar told the HELP Committee ranking member, "If confirmed, I look forward to being briefed by FDA on NEST and the opportunities to modernize the agency's post-marketing activities," after Murray explained that NEST is being supported by the device industry via user fees, but only for uses to improve pre-market approvals. (Also see "NEST Executive Director: A One Woman Army" - Medtech Insight, 19 May, 2017.)

Azar also wrote Murray that he needs to "learn more" about placing Unique Device Identifiers on medical claims, and was not informed about a recent recommendation of the HHS Office of Inspector General that UDIs need to be on insurance claim forms, after taxpayers spent more than $1.5bn for hundreds of Medicare beneficiaries to undergo procedures to swap out seven different types of faulty cardiac implants. (Also see "Lack Of Device Identifiers On Recalled Cardiac Devices Cost Medicare $1.5Bn, OIG Says" - Medtech Insight, 4 Oct, 2017.) Murray noted that while both CMS and FDA have supported the policy of putting UDIs on claim forms in prior years, during 2017, CMS reversed itself, citing the need to be certain that clinicians "would not be burdened by this policy change."

Azar responded: "There are two significant concerns at stake here: the integrity of the Medicare payment system and ensuring that we do not over-burden hardworking providers who care for beneficiaries – I take both concerns very seriously."

Also, in his responses to Murray's question about the recent CMS rollback of advanced payment models tied to value, rather than to volume – such as the agency's proposal to cancel the Cardiac Rehabilitation Incentive payment model, and to reduce geographic areas participating in the Comprehensive Care for Joint Replacement model – Azar seemed to favor those models that would reduce costs the most.

"I look forward to working with CMS to explore payment models that reduce costs and increase quality for Medicare beneficiaries," Azar told Murray. But he was silent on the need to seek out any industry feedback on how these payment models might affect or limit provider choice of specific technologies, which has been a sore point for the device industry. (Also see "Gaps In Quality Measures Could Lead To Loss In Device Product Access, White Paper Says" - Medtech Insight, 20 Dec, 2017.)

Generally, support and opposition to Azar was split down party lines. In responses to Murray's questions, Azar staked out his positions as a pro-life conservative who wants to return federal control over health-care decisions to the states.

House Republicans, including Energy and Commerce Committee Chairman Greg Walden of Oregon, and Health Subcommittee Chairman Michael Burgess of Texas, said that "Azar is uniquely equipped" for the HHS role. "We are confident he has the understanding of the issues facing our broken health-care system, and the skills and experience necessary to implement commonsense, patient-centered solutions," Walden and Burgess said in a statement.

Many Democrats, including those holding senior positions on committees with jurisdiction over health matters, opposed Azar's nomination and voted against him, including Sen. Ron Wyden, D-Ore., ranking member of the Senate Finance Committee. Wyden said that Azar would carry out "the president's broken promises on prescription drugs and health-care overall."

Meanwhile, Sen. Murray commented: "I'm alarmed that Mr. Azar believes a woman's employer should be able to decide, based on ideology, whether or not her birth control should be covered."

In her written questions, Murray stated that Azar's support of converting the Medicaid program to a block grant could allow states to cut services "and employ severe service rationing, including for services used by individuals with significant disabilities. … Doesn't this type of block-granting conflict with the goals of the Americans with Disabilities Act?" she asked him.

Azar replied that "states and territories must be given the flexibility they need to provide the highest quality health care they can to their own unique constituencies."

Azar also affirmed his position in responses to Murray that, "The mission of HHS is to enhance the health and well-being of all Americans, and this includes the unborn."

[Editor's note: Thank you for reading this article. Please help us to better help you, by taking our Pharma Feedback survey. Not only will your participation help steer our efforts to continually improve the content and delivery of our products – you’ll also have a chance to win one of four Amazon gift cards valued at $100 (US).]