Bayer has launched an internal oncology R&D unit to speed up development of its pipeline cancer therapies and ensure the company is first to market with its late-stage treatment candidates, head of pharma Dieter Weinand told Scrip on the sidelines of the pharma's annual results conference. 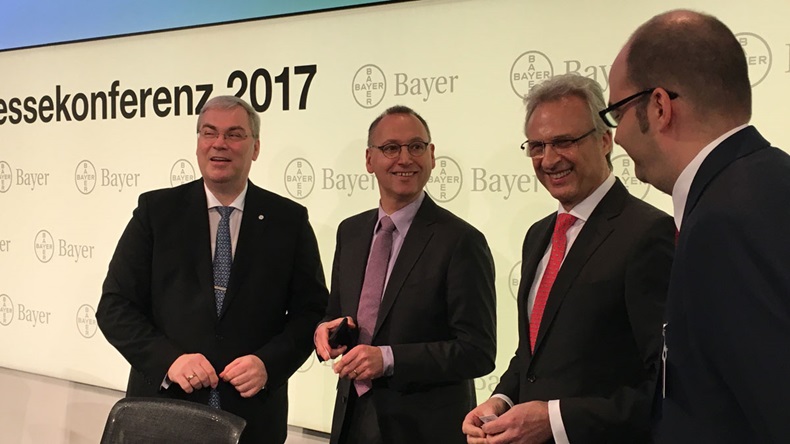 Bayer AG invested around 13% of the group's 2016 sales, or €4.4bn, in research. During the company's Feb. 22 annual results presentation in Leverkusen, Germany, CEO Werner Baumann called innovation the company's core competence – and as such the drug maker has launched a new internal oncology R&D arm, with more autonomy, to speed up decision making and R&D for its pipeline cancer therapeutics.

"Efforts to further strengthen our innovation capability are paying off, as we can see in our development pipelines," Baumann said. He highlighted that within the firm's pharmaceuticals business, for example, Bayer has a series of promising product candidates currently undergoing clinical development. The company estimates that six of them – in the mid- to late-stage pipeline – have a combined peak annual sales potential of at least €6bn.

Dieter Weinand, head of Bayer's pharmaceutical division, noted that these six key pipeline products, lined up to propel the company's sales in the near future, include a diabetic kidney failure drug, a heart failure compound being developed under a partnership with Merck & Co. Inc., and three cancer therapies.

He noted that the three oncology candidates included in this €6bn forecast are some of the company's products that have recently been moved into a special oncology development arm, known as the Oncology Strategic Business Unit. The oncology development unit, which launched in December 2016, is semi-autonomous, allowing for decisions around clinical progression and resource allotment to be made swiftly. Weinand noted that oncology studies can be different to the traditional pharma R&D model of Phase I, Phase II, then Phase III and registrational studies. "Oncology development is very different: a Phase I trial can very quickly be expanded into Phase II when you see a signal it is working, that Phase II can be used for registration and you can sometimes file on that Phase II study," he said. "In these cases, you can get a quick, conditional approval with a post-marketing commitment to complete your trials to get full approval."

He added that having all its pipeline oncology programs in one new specialist development unit allows Bayer to expand trials rapidly rather than go through the traditional route. "The unit will enable us to get to market first and fast with our oncology products. It is very important to be first to market, otherwise the standard of therapy is changed and your studies were against the old standard of therapy," Weinand highlighted.

Prior to joining Bayer in 2015 as senior vice president and head of the global oncology therapeutic area within pharma, LaCaze was senior VP and head of product and portfolio strategy at BMS. Most of his career has been spent in oncology, with a focus on global strategy and product launches for small molecules, biologics, and immuno-oncology therapies.

Bayer chief Baumann said during the full-year results presentation that the company had a record year for R&D spending in 2016 and that pharma and crop science accounted for 90% of its €4.4bn R&D costs. He added that Bayer planned to increase its R&D budget again in 2017. "Innovation is our core competence and the foundation of our commercial success. It is based on excellence in R&D – including early-stage research, which serves to safeguard our long-term growth," Baumann said.

Bayer's CEO added that as well as more than 14,000 employees throughout its global R&D network, the German firm is keen to pursue more partnerships with start-ups, biopharmas, academia and public research institutes to remain at the "cutting edge of scientific and technological development." He highlighted Bayer's late-2016 deal with Versant Ventures to launch stem cell company BlueRock Therapeutics as a prime example of the partnerships the company will chase. Bayer and Versant committed $225m into the BlueRock joint venture, which will focus on clinical programs for cardiovascular diseases, neurological disorders and diseases of the central nervous system.

As well as increased R&D spending in 2017, Bayer issued financial guidance in line with expectations: the big pharma expects to deliver group sales above €49bn in 2017, representing a low-to-mid-single-digit growth and earnings growth in mid-single digits. Its five key marketed drugs in pharma – Xarelto, Eylea, Xofigo, Stivarga and Adempas – are poised to post over €6bn in aggregated sales in 2017.