Topics: Cancer | Deals |
Provided by Datamonitor Healthcare: data analysis and insight | Biomedtracker: see the drug development process through analysts’ eyes |
Get a free demo
Product Login
Share
It has been a busy start to the year for the hot oncology drug target B-cell maturation antigen (BCMA), after AbbVie entered the race with a $90m upfront deal for Teneobio’s preclinical bi-specific antibody TNB-383B. Acting to link T cells via the CD3 receptor with BCMA-expressing multiple myeloma cells, this is one of the most competitive new immuno-oncology approaches. The deal follows on the heels of updates to development programs of anti-BCMA candidates from Regeneron and Amgen, while bluebird/Celgene, GlaxoSmithKline, and Johnson & Johnson are among the most advanced companies in the space.

Industry is certainly recognizing the scientific and therapeutic potential for BCMA, so we have sought to delve a bit deeper into the development landscape and potential commercial opportunity that awaits.

Celgene is heavily invested in the pipeline, bolstering its Revlimid position
As of February 2019, Biomedtracker lists 25 drugs or programs under active development that target BCMA; five of these have reached Phase II, 11 are at Phase I, while there are also assets being exclusively developed for China or still in preclinical development.

Celgene is leading the pack with six candidates of its own, which include the chimeric antigen receptor T-cell (CAR-T) programs that originated from its $9bn Juno acquisition in January 2018. This considerable research focus is to shore up its position within multiple myeloma, currently held through Revlimid (lenalidomide), which is set to face generic competition in major markets from 2022.


Value of BCMA assets has grown over the last decade
Through the last decade, there have been a total of nine major alliance deals relating to BCMA assets, with a notable uptick in more recent years. The first such deal was between Boehringer Ingelheim and Micromet in May 2010, involving a collaboration agreement to co-develop a preclinical candidate that was later to become AMG 420, which has now produced promising Phase I data. The upfront payment was just $6.6m, with a total deal value rising to $72.6m. Contrasting this with the $90m upfront that AbbVie has just paid out to Teneobio for an asset also at the preclinical stage shows the increased confidence in BCMA as a target and the enhanced value of these assets.

Johnson & Johnson’s December 2017 deal with Legend Biotech to acquire JNJ-68284528 involved a $350m upfront payment, reflecting the fact that the CAR-T therapy had already been accepted for review by the Chinese FDA in Legend’s domestic market.

Also among these deals are two agreements involving oral gamma secretase inhibitors, a target previously associated with Alzheimer’s disease progression, but latterly studied owing to its association with increased BCMA levels. Novartis (December 2018) and Juno Therapeutics (December 2017) both secured access to small molecules in order to test whether gamma secretase inhibition can strengthen the response of an anti-BCMA drug in multiple myeloma.

Multiple myeloma offers huge commercial opportunity for drug developers
The market for multiple myeloma drugs is an extremely attractive one for developers to target. Datamonitor Healthcare estimates that sales of these drugs totaled $11.9bn in 2017 in the US, Japan, and five major EU markets (France, Germany, Italy, Spain, and the UK), and the market is forecast to experience accelerated growth to $20.9bn by 2022. The commercial success of Revlimid has been central to the stature of the market, and its continued adoption in new front-line drug combinations will be a main driving force behind the projected overall market growth. Accordingly, Revlimid’s loss of exclusivity from 2022 will have a profound effect for all multiple myeloma drugs and represents a pivotal event for Celgene to navigate. A consequence of the planned acquisition by Bristol-Myers Squibb is to reduce the business’s overall reliance on Revlimid revenues.

Figure 1. Multiple myeloma sales across the US, Japan, and five major EU markets, by country, 2017–26 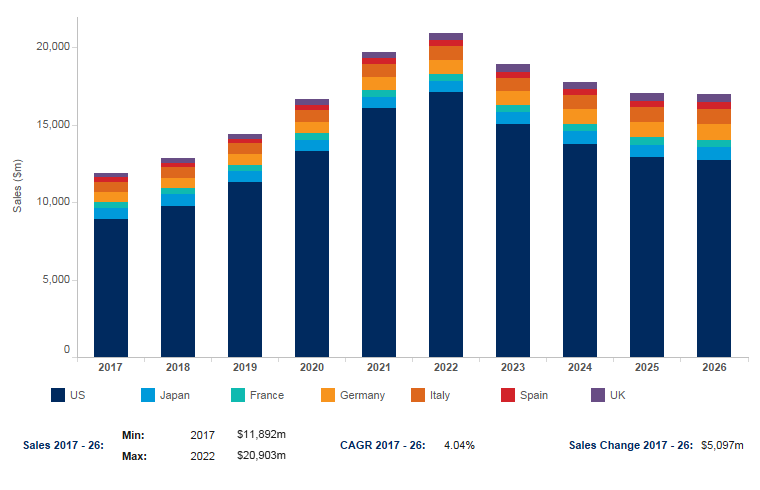