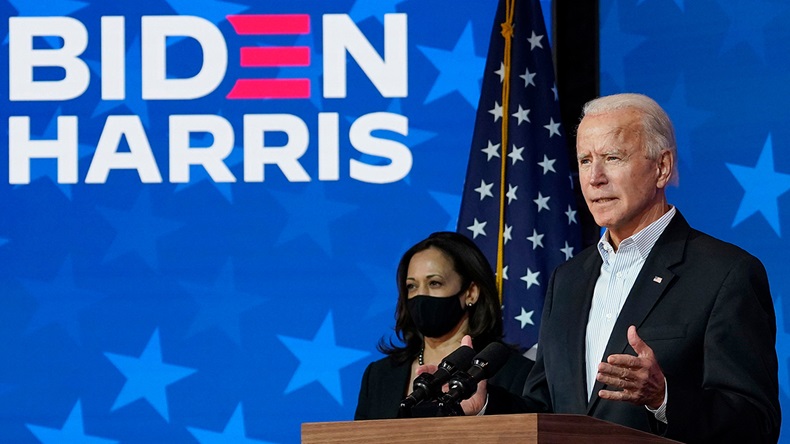 The composition of US President-elect Joe Biden’s COVID-19 advisory board announced 9 November is a positive sign that the Food and Drug Administration will be free from the political tinkering that often colored the pandemic response of President Donald Trump's administration, potentially beginning a reversal in recent trends of decreased public trust in the agency and future coronavirus vaccines, experts said.

Biden aimed to signal his commitment to addressing the pandemic and taking a new approach with high-profile activities on the first business day after his electoral vote tally appeared to make him the 2020 presidential election winner, even as President Trump vowed to challenge the results. Biden said in a speech that he plans to add more people to the group.

These picks suggest a bipartisan approach given that Kessler served presidents of both leading US political parties, said Ira Loss, who covers the agency for investors at Washington Analysis. “I’ve always viewed Borio as a nonpartisan scientist, not anybody with a political ax to grind,” Loss added.

“He was looking for people who are going to call it like they see it,” Loss said. “These are top-drawer people who did a good job when they were there,” he added, noting Kessler dealt with the HIV/AIDs epidemic.

Borio worked on the FDA’s response to the H1N1 flu pandemic, the 2014-2016 Ebola outbreak and the 2015-2016 Zika outbreak. From 2017 to 2019, she was director of medical and biodefense preparedness policy at the National Security Council.

“The people associated with FDA who are named on the task force are people with clear expertise that should have been relied upon in the first place. And to the extent that this rectifies it, that’s a very good step.” - CSPI's Peter Lurie

“The people associated with FDA who are named on the task force are people with clear expertise that should have been relied upon in the first place. And to the extent that this rectifies it, that’s a very good step,” said Peter Lurie, president of the Center for Science in the Public Interest and former FDA associate commissioner for public health strategy and analysis.

Others said the board makeup is a good indication the agency will be allowed to maintain its independence in the Biden administration and that it will pick top FDA leadership with science-based experience.

“It’s important to have amongst the team that he’s assembled people who understand the importance of FDA as a leading public health agency that has to play a key role in the response. And, I think, Kessler and the former chief scientist understand the agency must be allowed to make its decisions without political influence. And I’m sure they will reinforce that message to Biden,” said Michael Carome, director of Public Citizen’s Health Research Group. “I think Biden understands that without them, but clearly having Kessler and Borio on the board will simply reinforce that.”

Carome said he was pleased with the overall composition of the board, saying it has the “appropriate breadth of expertise” and the composition shows that “science and evidence is going be the paramount principle.”

“Unlike the Trump administration, a Biden administration is going to allow FDA scientists and experts to independently make decisions about which medical products including vaccines should or should not be approved. And there will not be political pressure coming from a Biden White House to force decisions that go against the science or pre-empt science,” Carome said.

While Trump has regularly contradicted government scientists, Biden is expected to defer to medical expertise.

“Throughout Joe Biden’s career, he has been known to rely on the advice of scientists and health professionals. This is a good sign that he intends to continue that pattern,” said Steven Grossman, deputy executive director of the Alliance for a Stronger FDA.

Biden himself acknowledged the FDA’s science-based mission in a speech on the advisory board. Noting the positive news from Pfizer Inc.’s COVID-19 vaccine trial, he said the FDA “will run a process of rigorous reviews” and “the process must also be ground in science and be fully transparent so the American people can have every confidence that any approved vaccine is safe and effective.” (Also see "The World Celebrates Pfizer's 90% COVID-19 Vaccine Efficacy Data, With Cautious Caveats" - Pink Sheet, 9 Nov, 2020.)

The Biden team has a seven-point COVID-19 plan that includes planning for the effective and equitable distribution of treatments and vaccines. This includes investing $25bn in vaccine manufacturing and distribution.

“The following three principles will guide the Biden-Harris administration: Put scientists in charge of all decisions on safety and efficacy; publicly release clinical data for any vaccine the FDA approves; and authorize career staff to write a written report for public review and permit them to appear before Congress and speak publicly uncensored,” the plan says.

Besides Kessler and Borio, Biden’s COVID-19 advisory board also includes Kessler’s co-chairs, Vivek Murthy, who was President Barack Obama’s surgeon general, and Marcella Nunez-Smith, a professor and associate dean for healthy equity at the Yale School of Medicine.

Julia Morita, executive vice president of the Robert Wood Johnson Foundation and former member of the Centers for Disease Control and Prevention's Advisory Committee on Immunization Practices is in the group, as is Michael Osterhold, director of the Center for Infectious Disease Research and Policy at the University of Minnesota, and Loyce Pace, executive director and president of the Global Health Council. Robert Rodriguez, a professor of emergency medicine at University of California San Francisco, and Eric Goosby, also of UCSF, who worked on HIV initiatives for multiple presidential administrations, round out the group.

Lurie said the new COVID-19 advisory board indicates that “science has a new place in the foreground in the response to the coronavirus pandemic,” and in turn that the agency should have more influence. But he said he thinks it is more of an indirect outcome that will occur because of the focus on science and not necessarily because there are ex-FDA officials on the committee.

Industry groups were positive on Biden’s announcement. For example, the Biotechnology Innovation Organization said: “President-elect Biden is assembling a strong team, and we look forward to working closely with the members of his advisory committee to end the pandemic and help the nation return to normal."