It had been a slow start to the year but one unusually large financing round from cancer diagnostics company Grail means the first quarter of 2017 has now outpaced the performance from any in the previous four years. 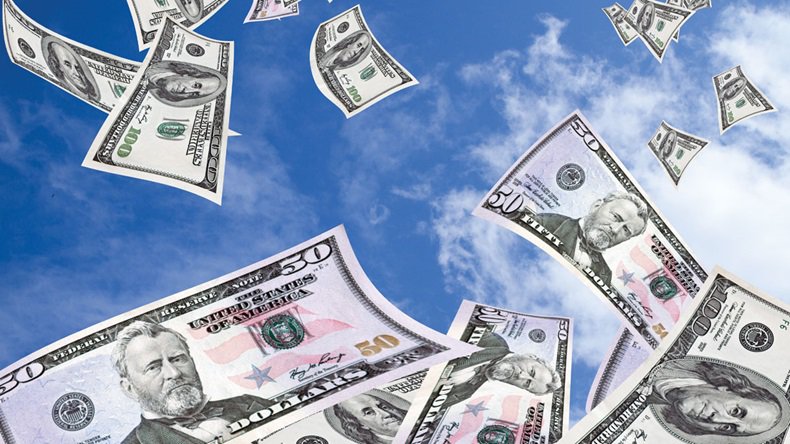 One big-buck deal can make all the difference and the $900m raised by Illumina-spinout, Grail, in March more than lifted 2017 out of the doldrums and shot the first quarter's total deal value to a five-year high. (See infographic for Q1 key facts and figures).

Some 20 financing deals of $1m-and-over passed Medtech Insight's news desk in March, the same volume as February. However, last month not only saw the first nine-figure transaction of the year, there were more deals towards the $30m-plus end of the value range. (see Figure 1).

Source:Medtech Insight's VC deal tracker
From the 18 deals that disclosed financial details, around $1.34bn was raised in total. Grail's $900m. which is the first tranche of a series B, accounted for the lion's share – but even if this was taken out of the mix, this would still leave a total deal value of $436m, beating February's total of $202m and January's $344m.

When comparing first-quarter deal value across a five-year period, 2017 rises head and shoulders above the previous years. (See Table 1 and Figure 2).

Grail had been hoping to raise around $100m more before the end of the quarter to close the series B round at over $1bn, but as this article went to press, there had been no news of any additional funding. Johnson & Johnson Innovation was the biggest investor in the $900m first tranche, with the participation of ARCH Venture Partners, as well as certain well-known names in the pharma, tech and medtech space, such as Bristol- Myers Squibb, Celgene, Merck, Amazon and Varian Medical Systems. Of course, Chinese players are now ubiquitous in these types of investments and Grail's investor from the East comes in the form of China's leading internet services provider Tencent Holdings.

Grail was spun out of Illumina last year, and – as its name indicates – is on the mission to develop a simple blood test that can screen for cancer at an early stage.

The second largest fundraising in March came from Freenome, which also has a similar focus to Grail, that being to develop liquid biopsy tests that use cell-free DNA circulating in the blood to allow earlier and better diagnosis of disease. What's commendable about Freenome's deal is that it was an impressive $65m series A, an unusually large amount for an early-stage round. Freenome also has some big tech names backing it, including Google Ventures.

Orthopedics attracted a lot of the big bucks in March, with three companies in this space featured in the month's top 5 biggest deals. (See Table 2). 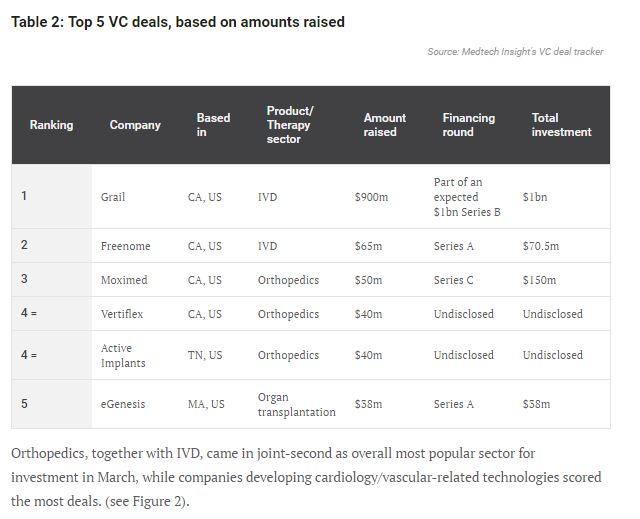 No. of VC deals, based on product/therapy sector

How the venture financing climate will look in the coming months is hard to predict. M&A activity this year to date has been very quiet, with many transactions being more about acquisitions of mid-sized assets to consolidate the buyer's presence in its respective market, rather than a technology buy to fill portfolio gaps. That said, there is a still a lot of time for the tables to turn and if Grail does complete its series B with another $100m in the bag over the next few months, and the flow of bigger buck-deals start picking up like it did for March, 2017 may end on a better note than it started.