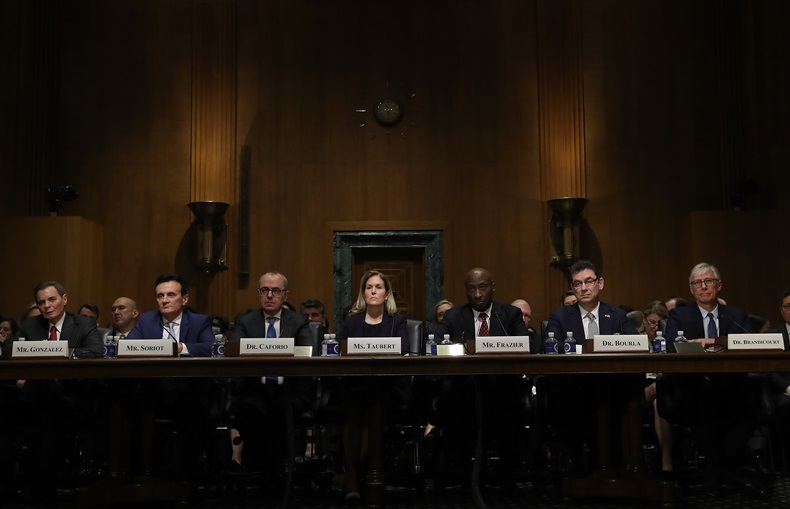 Drug industry leaders faced off with US legislators at a Senate Finance Committee hearing on drug prices Feb. 26, but the tone was more collaborative than confrontational. Industry has reason to be cautiously optimistic after seven of its big pharma leaders got through more than three hours of testimony on drug pricing with relative ease.

Nonetheless, there does appear to be bipartisan support for legislative changes to address the high cost of prescription drugs. Republican senators on the committee delivered some of the more targeted and pointed questions on issues ranging from patent abuses to biosimilar disincentives and even the proposal to link US drug prices to an international pricing index. That could leave industry with a sense of unease, despite having cleared the hearing.

As Chairman Chuck Grassley (R-Iowa) told reporters after the hearing closed, "I'm prepared to legislate, but if you ask me what I plan to legislate, I don't have an answer for that yet." When asked if he thought the big pharma CEOs simply pointed the finger instead of accepting blame, he said, "Not as much as I thought they would." And he added, "We may find out there is a legitimacy to pointing the finger to somebody else down the line."

The hearing got played up as a big showdown for industry on Capitol Hill in the days leading up to it. Although drug leaders have been called to testify to Congress on a range of issues over the years from drug pricing to drug safety, big pharma's top CEOs have done their best to duck any high-profile appearances in front of Congress in the last 15 years. (Also see "Senate Drug Pricing Hearing Looms As Unparalleled Event For Pharma" - Pink Sheet, 22 Feb, 2019.)

Now they might be feeling as though the bark was worse than the bite. Though there were some tense moments and uncomfortable comments about multi-million-dollar CEO salaries, the seven leaders managed to avoid any standout embarrassing confrontations.

Together, they presented a solid collective message: industry wants to work with Congress to lower drug prices, but pharma is just one part of a bigger system that requires cooperation from other partners as well as legislative action.

Bringing Ideas To The Table

Several leaders included ideas for lowering drug costs in their opening statements. Soriot's opening testimony stood out in that regard, with four clear-cut proposals, including rebate reform, out-of-pocket caps for Medicare patients, a system that supports value-based agreements, and fostering a healthy biosimilar market.

All seven leaders voiced strong support for reforming the current rebate system. Some, like Pfizer's Bourla, pledged to return the savings from rebates to patients. "We commit that every single dollar will go to the patients," Bourla said.

He also advocated for policy changes that would pave the way for rebate reform in Medicare and commercial plans, which he said would result in lower list prices.

Merck's Frazier echoed that sentiment, claiming rebate changes would need to occur across both commercial and government plans before he could commit to lower list prices.

"Assuming that we do change the systems on the commercial side and the Medicare side so that no one company faces a disadvantage, we would be lowering list prices," Frazier said. "We have lowered list prices in the past and have found that it creates a financial disadvantage for the company and it doesn't get us more volume because of the incentives in the system."

Ranking Member Ron Wyden (D-Ore.), who delivered some of the more confrontational statements in his opening remarks – calling out the industry for empty gestures on pricing – wanted something more official. He demanded that each of the leaders respond in writing within 10 days as to whether or not they would support a law requiring list price reductions by the amount of the rebate if rebates are eliminated.

There were other confrontational moments, like when Sen. Maggie Hassan (D-N.H.) grilled Taubert on Johnson & Johnson's opioid marketing practices. Hassan's line of questioning was raw, but Taubert was able to deflect by pointing out that opioid sales account for less than 1% of J&J's current revenues.

Some of the most surprising and challenging lines of questioning came from Republican senators, particularly Sen. Bill Cassidy (R-La.). "It is almost as if the taxpayer has stupid written on their face," he said, holding up packaging for Duexis (ibuprofen/famotidine), a combination of two drugs available generically and manufactured by Horizon Pharma AG, which he said costs more than $200 a month.

Cassidy almost seemed to be advocating in favor of direct Medicare negotiations at one point. "Medicare has a very limited ability to negotiate based on marginal value, and I think that is one of the fundamental problems in this," he said. "Is it reasonable if Medicare should have the ability to make some sort of judgement based on the relative value of the medicine?" he asked.

Taubert took a stab at answering, noting, "The PBMs are very effective in negotiating. We don't know that the government would be as effective at negotiating as the professional negotiators."

Cassidy turned his line of questioning to the high cost of drug prices compared to other countries, and HHS' proposed rule to develop an international pricing index for some drugs under Medicare Part B. (Also see "Medicare IPI Model Could Import Benefit Of Biosimilar Competition, Azar Suggests" - Pink Sheet, 15 Jan, 2019.)

"Something is fundamentally broke in our system that the Danes get an 80% discount and we are not," Cassidy said.

Pharma was also grilled by Wyden about whether or not they make a profit in other Western industrialized countries, where the drugs are priced substantially lower, to which they testified that they do. "We make money in any country in which we sell unless we donate the product," AbbVie's Gonzalez testified.

But the industry leaders tried to counter that new drugs are not always available in other markets the way they are in the US. Bourla quietly responded with one zinger, "I can assure you if you get cancer or another serious disease, you want to be treated in this country."

They were also asked if they've reconsidered their international pricing strategies, to which Frazier responded, "The reality of the world is the greatest opportunity we have is to walk away … and frankly, they know that."

Pfizer's Bourla and AbbVie's Gonzalez both advocated in favor of the US exploring trade agreements as a way to better balance the differential pricing around the world.

Sen. John Cornyn (R-Texas) took a deep dive into AbbVie's patent estate around Humira and a line of questioning around the delayed launch of biosimilar versions of Humira in the US versus Europe. Then, he suggested the Senate Judiciary Committee take up a review of the patent issues, which Grassley said he would support.

A Senate Judiciary inquiry could open up a whole new line of Congressional oversight that industry would surely prefer to avoid.

But by the end of the hearing only Grassley and Cassidy were left for the closing remarks, not exactly an intimidating audience for the polished group of pharmaceutical executives. The meeting was called to a close, and there was a collective sigh of relief from the industry.