BOSTON, HOME TO THE WORLD'S BIGGEST BIOPHARMA CLUSTER, WAS HIT EARLY BY COVID-19, THANKS IN PART TO THE BIOGEN MEETING.

A meeting of Biogen, Inc. employees held in a Boston hotel in February was a ‘superspreader’ event, ultimately responsible for passing on COVID-19 infection to tens of thousands of people, new research has confirmed.

The internal company meeting was held at the Marriott Long Wharf in the city’s Seaport District between 24 and 27 February, but it was more than a week later that it became clear it was the center of a major COVID-19 outbreak, one of the first to hit the US.

The new study by researchers at the Broad Institute in Boston and published as a (pre-peer review) preprint has used genetic sequencing to trace the spread of the infections, and has found the meeting played a major role in spreading SARS-CoV2 across the city, the US and internationally. 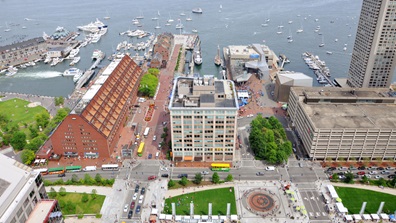 The research will make uncomfortable reading for Biogen, which is headquartered in the city, although the researchers concluded that chance had played a big role in determining which early cases introduced to Boston went on to become superspreaders, and which were contained.

The study identified two specific COVID-19 mutations associated with cases from people attending the conference. The team then sequenced virus genomes of 772 COVID-19 patients in the Boston area and found 289 cases with the same mutation signature, including 122 people at homeless shelters.

A total of 90 cases were linked directly to people who attended the event or immediate acquaintances, but the Broad researchers estimate that the meeting ultimately led to around 20,000 cases.

The team had samples from 28 people who attended the event, and were able to trace the two specific SARS-CoV-2 strains, identified as C2416T and G26233T. C2416T was linked to a single introduction from Europe – highly plausible given that Biogen employees traveled from around the world to attend the meeting.

The research showed that the after the meeting ended, C2416T/G26233T was unwittingly spread to several US states, including Virginia, North Carolina and Texas, and internationally, to Australia, Sweden and Slovakia.

Commenting on the research, a Biogen spokesperson told the Boston Post that the company had followed health guidelines when it held the meeting, but added that “general knowledge about the coronavirus was limited” at the time, and that the company informed experts as soon as it was aware of the outbreak.

“We never would have knowingly put anyone at risk,” the spokeswoman told the newspaper.

The research team concluded that the spread of COVID-19 infections highlighted close relationships between otherwise disconnected groups, including international business travelers and people experiencing homelessness. It also emphasized the role of chance, and the fact that the meeting took place early on in the COVID-19 outbreak in making it a superspreader event.

“This study provides direct evidence that superspreading events may profoundly alter the course of an epidemic and implies that prevention, detection, and mitigation of such events should be a priority for public health efforts,” the researchers concluded.

Biogen’s senior leadership team was criticized at the time, however, as several of these executives, including CEO Michel Vounatsos, attended the Cowen Health Care conference in Boston shortly afterwards between 2 and 4 March, when it was becoming apparent employees had been infected. One of the executives subsequently developed symptoms and self-isolated, but Biogen did not disclose the person’s identity.

Then later that month, another Biogen employee was dismissed from the company after departing the US for China with her family, after knowingly having contracted COVID-19. Jian Li, a clinical manager for Biogen was then charged by Chinese authorities for withholding information about her confirmed infection and risking public health. (Also see "Coronavirus Update: India Approves Remdesivir, Ex-Biogen Employee Charged" - Scrip, 3 Jun, 2020.)

At the same time, Biogen was quick to donate funds to help fight the COVID-19, providing $10m to pandemic relief efforts in March. Many employees who recovered from the illness have given blood to a biobank set up by the Broad Institute of MIT and Harvard, and Partners HealthCare to help researchers study the virus.