Biomarkers in Alzheimer’s Trials: Where we are on The Longest Day

Each year the Alzheimer’s Association uses the summer solstice to raise awareness about Alzheimer’s disease[1], a neurodegenerative disorder that is estimated to have more than 2.8 million cases in the US alone[2]. Called “The Longest Day”, this is an appropriate time to stop and consider how biomarkers are being used in the clinical trials space for Alzheimer’s disease. An assessment of Trialtrove’s 514 industry sponsored, Phase II through III, ongoing or completed Alzheimer’s disease trials reveals 123 trials that include the use of biomarkers. Of these, two major categories of biomarkers assessed as clinical trial outcomes include neurochemical biomarkers and neuroimaging biomarkers that will be explored more thoroughly.

The accumulation of two types of proteins, beta amyloid and tau, aggregate to form the plaques and neurofibrillary tangles, respectively, which lead to the characteristic anomalies seen in the brains of Alzheimer’s disease patients[3]. The levels of these proteins in the cerebral spinal fluid (CSF) make up the neurochemical biomarkers that are most frequently evaluated in clinical trials. The data profiled in Figure 1 illustrates that the beta amyloid biomarker is key to these evaluations. This is not surprising given that CSF beta amyloid 1-42 has been highlighted as the earliest major marker of beta amyloid accumulation, even prior to clinical manifestation of the disease[4]. Interestingly, many trials are not limiting the evaluation to only the 1-42 length peptide, but are also exploring the various lengths of beta amyloid peptides. CSF total and phosphorylated tau are biomarkers of neuronal dysfunction and downstream processes in Alzheimer’s disease[5]. 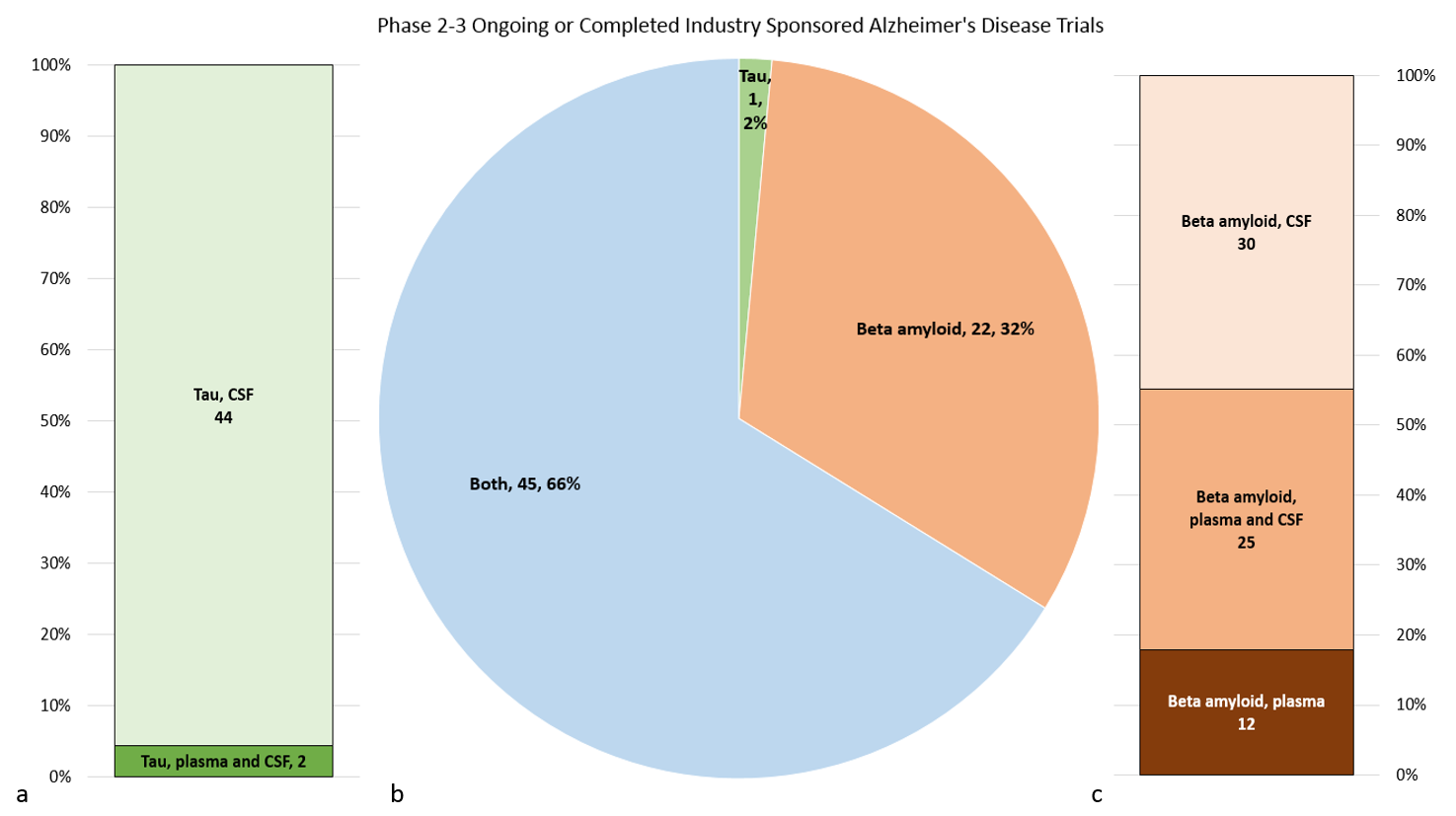 Both tau and beta amyloid are most commonly evaluated in CSF, but beta amyloid proteins also are frequently measured in the plasma. All but one of the 46 total trials evaluating tau also measure beta amyloid (Figure 1b) and there are no trials that only evaluate plasma tau levels (Figure 1a). There are 12 trials that report only plasma levels of beta amyloid and do not evaluate CSF levels (Figure 1c). Only two trials measure plasma tau and these studies evaluate a metal-protein attenuating drug and active amyloid beta immune therapy vaccine. On the other hand, plasma beta amyloid is measured in trials for drugs with a broad range of mechanisms, and is not limited to those targeting a specific biochemical pathway.

Amyloid PET imaging agents being evaluated in Alzheimer’s disease trials include the fluorine-18 isotope labelled tracers (F-18): florbetapir (Amyvid by Eli Lilly)[6], flutemetamol (Vizamyl by GE Healthcare)[7], and florbetaben (Neuraceq by Piramal Imaging)[8], agents that were approved for use to support a diagnosis of Alzheimer’s disease in 2012, 2013, and 2014, respectively. Carbon 11-labeled Pittsburgh compound B (PiB) also binds to fibrillary beta amyloid[9]. Fluorine-18 labelled flurodeoxyglucose (FDG) identifies hypometabolism in the brain that may be indicative of neuronal dysfunction. Figure 2 illustrates how approximately one third of trials evaluating PET imaging include both amyloid imaging and FDG imaging, indicating a focus on detecting early beta amyloid accumulation and successive neuronal injury4. 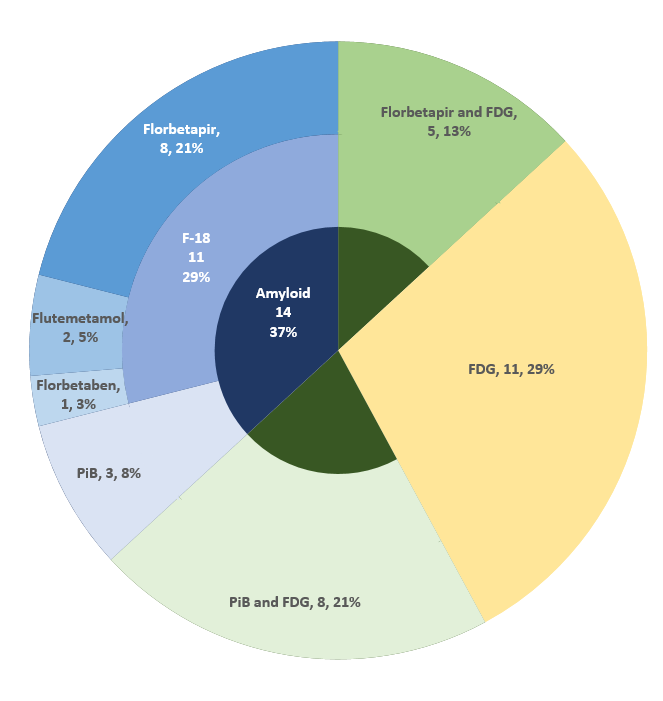 New guidelines were outlined by the National Institute on Aging and Alzheimer’s Association in 2011, recommending the use of biomarkers in Alzheimer’s disease clinical development[10]. We see from our Trialtrove analysis that they are mostly being explored as secondary or other endpoints (Figure 3). In addition, some comprise sub-studies of clinical trials that involve a separate consent form. Although MRI is reported as an outcome measure in more clinical trials than PET, the latter is more frequently used as a primary outcome. PET has been reported as a primary outcome in 38% of Alzheimer’s trials measuring PET as an endpoint. Of these, amyloid PET tracers are evaluated the most frequently with PiB and florbetapir measured as a primary endpoints in 8 and 5 trials, respectively. Amyloid PET closely follows CSF beta amyloid 1-42 as a well-studied early marker of beta amyloid accumulation in Alzheimer’s disease prior to onset of clinical symptoms3. The frequent use of this tracer in trials may reflect the recruitment of earlier stage patient segments for Alzheimer’s drug trials. 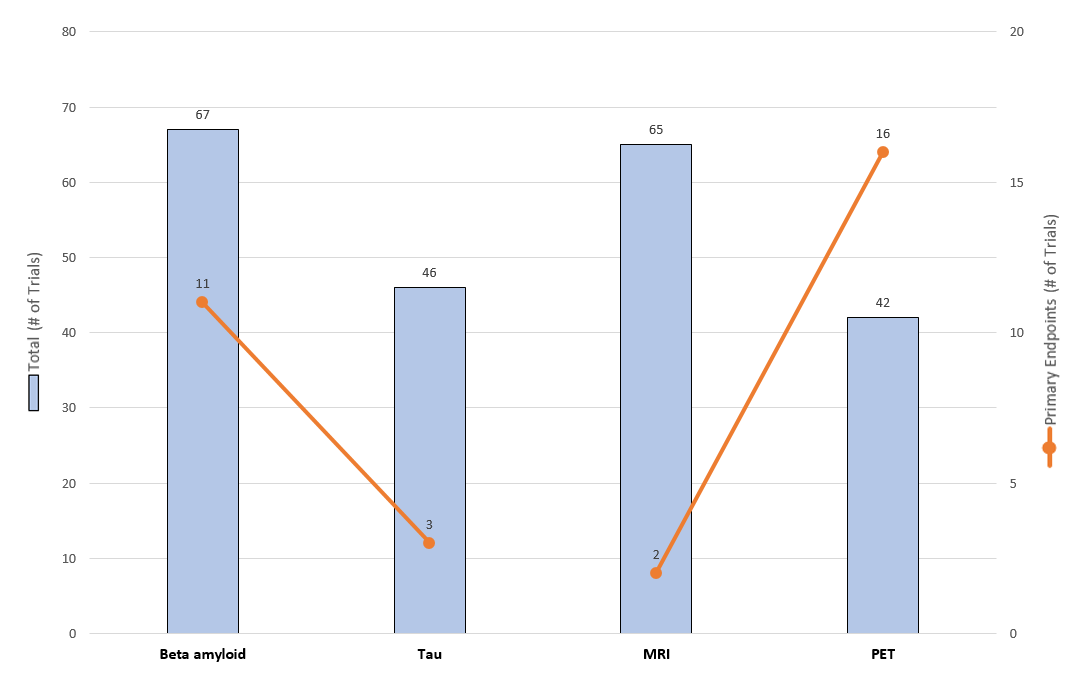 Genetic biomarkers alone do not constitute clinical outcomes in Alzheimer’s disease trials, however, they may be a useful tool in the evaluation of outcomes as stratified by patient genotype. Other neurochemical and neuroimaging biomarkers are also being explored, but on a much smaller scale in the late phase Alzheimer’s disease trials. In contrast, the use of beta amyloid and tau proteins as well as MRI and PET imaging now stand as important study design features. The frequent use of CSF beta amyloid 1-42, and PET scanning as a primary endpoint, reflects a keen interest in evaluating treatments in earlier stages of the disease. As earlier diagnoses and clinical outcomes are increasingly supported by these tools in Alzheimer’s disease trials, we hope to see more advances in treating this devastating disease.