Despite a drop in overall clinical trial approvals in South Korea last year, trials for biologics continued to climb, reflecting robust R&D activities in biosimilars and cell therapies on the back of the government's support for the biotech industry.

Biologics accounted for 36% of the total clinical trials approved in the country last year, up from 30% and 26% in 2015 and 2014, respectively, the MFDS said in a statement. South Korean clinical trials for biosimilars were also active last year on the back of rapid pipeline progress at Celltrion Inc. and Samsung Bioepis Co. Ltd.. Samsung Bioepis has received the green light from the MFDS for a Phase III clinical trial of SB 8, its biosimilar version of Avastin (bevacizumab), while Celltrion has received approval for trials of CT-P13, its biosimilar infliximab. 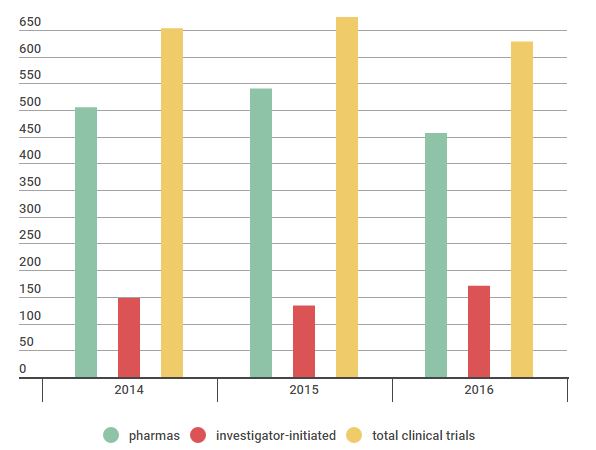 A Phase I/II study of Yuhan's EGFR tyrosine-kinase inhibitor YH25448, a Phase I of Cellid's immunotherapeutic vaccine BVAC-C and Phase I trials of Tagrisso (osimertinib) were among the approvals for oncology drug trials last year.

Meanwhile, approvals for clinical trials in South Korea fell 22%, reflecting an overall drop in every clinical trial phase, but particularly a steep drop in Phase II.

In the case of multiple country clinical trials in South Korea, total approvals declined 9%, but approvals for Phase I trials increased 14% as South Korea is seeking to attract more early phase trials from global pharmaceutical companies.

Another point worth noting from last year's clinical trial data was an increase in investigator-initiated trials as Korean researchers diversify clinical trials to explore administration methods and dosages that meet the domestic medical situations and characteristics of patients.