Business of Biosimilars Preview: Outlook for Development of Monoclonal Antibodies in Emerging Markets

The pace of development of biosimilar1 monoclonal antibodies (mAbs) over the past few years has increased greatly with many generics firms as well as major pharmaceutical companies recently entering the race.  For many companies, development is proceeding more globally, which is challenging since the regulatory pathways for biosimilars in many countries are still evolving. Many potential players are watching to see what develops in various markets, but many companies and regulatory authorities are looking towards more established models for biosimilar regulation such as the EU pathway.  Progress towards harmonization of regulatory pathways and global partnerships should help facilitate the development of biosimilars in emerging markets, where the need is greatest.

What is the outlook for development in emerging markets?  At the European Society for Medical Oncology (ESMO) congress held last month in Madrid from 26 -30 September, Roche announced final survival results for the Phase 3, Cleopatra trial.   The addition of Perjeta (pertuzumab) to Herceptin and docetaxel based chemotherapy increased survival times of patients with previously untreated HER2 positive breast cancer up to 15.7 months compared to Herceptin plus chemotherapy alone.  For certain tumors, such as metastatic breast cancer, this is an unprecedented increase in survival time and is sure to spark interest in the development of biosimilar versions of pertuzumab.  While patent protection for Perjeta is in place for quite a number of years, most likely through 2025, the high degree of clinical success of the drug suggests that this may be a worthwhile biosimilar candidate.

Compared to the top selling mAbs, Perjeta had total global sales of only about 350 million in 2013. Perjeta was originally approved by the US FDA in 2012 for treatment of this indication and the new survival results should strengthen its position.  However, the high cost per treatment is definitely a factor in reduced sales in the US, as well as in emerging markets, compared to other mAbs. 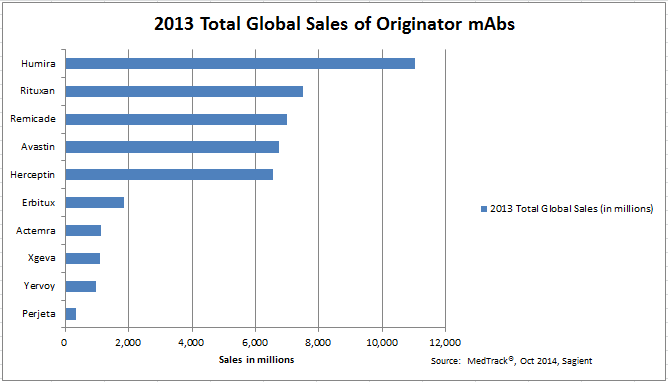 Surprisingly, there are no disclosed biosimilar versions of pertuzumab in preclinical or clinical development.  However, a look at what is in development for some of the best-selling mAbs results in some interesting observations that may be useful for the biosimilar mAb road map going forward.

With Humira the front runner in global sales in 2013, and already having lost patent protection in some regions, it is surprising that there are only 16 adalimumab biosimilar versions currently in active development in 2014 as compared to Rituxan, with 31 versions of rituximab. There were no phase III trials ongoing for any of the adalimumab biosimilars until 2014, whereas for rituximab, there were 5 phase III trials ongoing in 2012. Dr. Reddy’s Reditux was the first rituximab copy to be approved in India in 2007 and the number of launched versions of rituximab has risen to five in 2014.  On the other hand, Humira is currently launched in nearly ten different inflammatory indications including rheumatoid arthritis, Crohn’s disease, ankylosing spondyliltis, ulcerative colitis and psoriasis but no biosimilar versions have yet been approved.  Given the wide range of inflammatory diseases indicated for treatment by Humira, there appears to be room for development of competing versions. 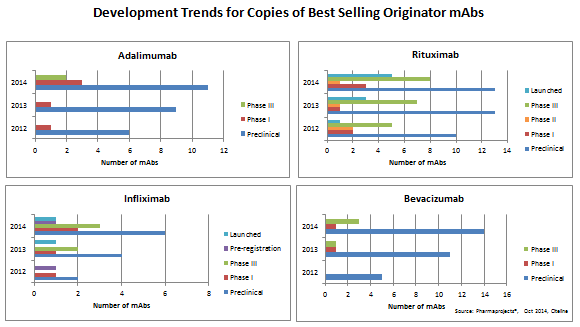 It will be interesting to see which of the multiple versions of rituximab in Phase III receives approval first, and in which markets.  Only two of these versions are under development by major pharma companies, Boehringer-Ingelheim and Sandoz, while the remaining development is being undertaken by generics focused companies including Teva and Celltrion.  Not unexpectedly, rituximab biosimilar trials are being run by large pharmaceutical companies, Pfizer, Boehringer Ingelheim and Amgen in more regulated markets, with Pfizer running global trials (including in emerging markets) and Sandoz concentrating on Latin America and Asia as well as Europe.  Celltrion is concentrating on emerging markets in Eastern Europe, Asia and Latin America.  However, in the case of adalimumab biosimilars, Amgen is running trials in both established and emerging markets, while Pfizer is concentrating on the US and Merck KGaA on the UK.  Interestingly, FujiFilm/Kyowa Hakko Kirin is running trials exclusively in the UK while Samsung Bioepsis (a collaboration with Biogen-Idec) is running trials more globally, and particularly in emerging markets. 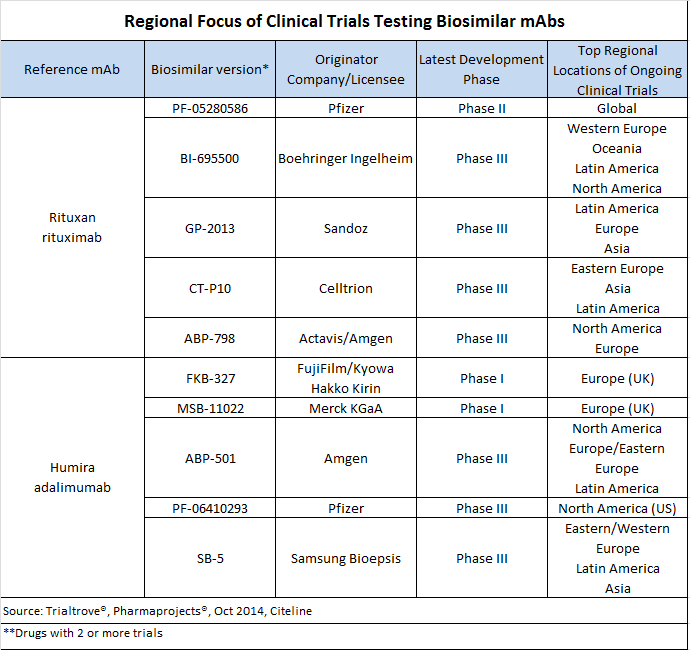 While the pace of biosimilar mAb development is rapidly increasing, taken together, both the case of Humira (adalimumab), where fewer competing versions currently exist, and the recent clinical success of Perjeta, indicates there is both available space and impetus for development in emerging markets.

1. Note: Citeline defines a biosimilar as any copy of a biologic under development in any country

For more on the current landscape of biosimilars and opportunities for development in emerging markets, please attend the 15th Annual Business of Biosimilars event in Boston from October 20 -22.