2016: A Blockbuster Year for Oncology in Early Phase Trials

Early phase trials are key to the drug development process, answering questions about safety, dosage, feasibility, and sometimes initial efficacy of a drug. As such, the Clinical and Research Excellence (CARE) Awards recognizes achievements within this vital aspect of R&D through the ‘Most Successful Early Phase Trial (Preclinical & Phase I)’ Award, honoring recent early phase trials that met or surpassed its objectives. Ahead of the awards, this blog takes a look at Phase I trials that reported positive outcomes in 2016 and highlight the top diseases. We will also take a closer look at two noteworthy trials, and discuss their results as well as share some insight as to the status of these drugs currently.

As of March 2017, 184 early phase trials across all therapeutic areas reported positive outcomes within 2016. Among these trials, Oncology swept the board with the following top ten diseases as depicted in Figure 1 below. The first non-oncology indication to report the largest number of early phase trials meeting its primary endpoint(s) in 2016 was Other Viral Vaccines (10 trials) within the area of Vaccines (Infectious Diseases), tied for 14th place with two other cancers (Gastric and Prostate). [1] 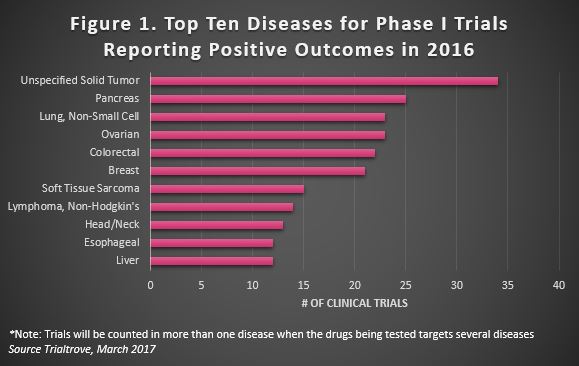 One notable early phase trial of the year included Karyopharm’s Selinexor, an oral anti-cancer drug that was first evaluated in patients with relapsed and/or refractory hematological and solid tumor malignancies. Results from this trial have shown that when administered as a single-agent, patients sufficiently tolerated the drug and could remain on the therapy between 20 and 24 months. [2] The drug was further developed in an additional Phase 1b clinical trial evaluating patients with advanced refractory bone or soft tissue sarcoma. Results for the Phase 1b trial posted by the company in July 2016, noted the drug was well tolerated at a dose of 60mg twice/week dosing schedule. Of the 52 patients evaluated, 58% showed best response of stable disease with 33% experiencing durable SD >4 months. Additionally, the drug effected reduced target lesion sizes in comparison to baseline for 30% of patients with quantifiable tumor measurements, particularly among those with dedifferentiated liposarcoma. [3] Selinexor (KPT-330) is a first-in-class XPO1 antagonist and is the first compound oral XPO1 inhibitor under clinical development. The XPO1 inhibitor functions by binding with and inhibiting the nuclear export protein CPO1 (also called CRM1) which leads to the accumulation of tumor suppressor proteins in the nucleus. [2]

Following the promising results from these early phase trials, Selinexor’ s potential as a treatment option for a rare and difficult to treat disease is confirmed by its progression in clinical development of a phase 2 study (SEAL) for patients with advanced unresectable dedifferentiated liposarcoma and pleomorphic liposarcoma (DDLPS) in the U.S. and Canada. [4] Top-line data from this study is anticipated to be available in mid-2017. [2] Other developments for this drug included FDA orphan drug status in the treatment of soft tissue sarcoma on July 7, 2016. [5] Dr. Scacham, founder and Chief Scientific Officer of Karyopharm, believes Selinexor has the potential to provide significant advanced treatment for sarcomas and stated “we look forward to leveraging the benefits of the orphan designation to bring Selinexor to patients in need as rapidly as possible.” [2]

Also noteworthy is Eli Lilly’s Phase I trial of abemaciclib in patients with advanced cancer. This study was particularly interesting to me because it is another first in kind trial which allowed continuous dosing in order to achieve a sustained target inhibition for the CDK4 and CDK5 inhibitors. [6] The study took place in multiple centers across the U.S. for dose escalation followed by specific cohorts for breast cancer, NSCLC, glioblastoma, melanoma and colorectal cancer. A total of 225 patients were enrolled (15% dose escalation and 85% tumor specific cohorts). The dose-limiting toxicity was grade 3 fatigue with the maximum tolerated dose of 200mg every 12 hrs. [7] Back in October 2015, Lilly was granted FDA breakthrough therapy designation for abemaciclib, which provides the company an opportunity to expedite development and review. [6] Results posted on May 23, 2016 mentioned that this first-in-human experience demonstrated single-agent activity for patients with advanced breast cancer, NSCLC and other solid tumors. The trial concluded with a 31% response rate achieved for hormone receptor-positive breast cancer. Additionally, 61% of patients achieved either response or stable disease lasting >6months. [6] The company is expected to file its regulatory submissions for the drug in 2017 in the U.S. for its MONARCH 1 study, and the US/ EU/Japan for its MONARCH 2 study. [8]

Both trials I highlighted as notable are breaking new ground and thinking out of the box to develop alternative therapies. However, these are just two of many successful early phase trials that will hopefully lead to drug therapies for diseases that are either hard to treat or target unmet medical needs. Other examples can be found among the entries into the CARE Awards, including the following three finalists for ‘Most Successful Early Phase Trial (Preclinical & Phase I)’.

Which of these early phase cancer trials will take home the CARE Award on April 5th? Join us at The State Room in Boston as we unveil the winner for this category, and many more, to find out.

For more information about the Clinical and Research Excellence (CARE) Awards, including how to book a table or sponsorship opportunities, please visit clinicalresearchexcellence.com