With the current, constant attention on Asia as a major, evolving pharma market, the clinical trial activity in this region has drawn interest across a broad audience. We provide here an analysis focused on the recent study starts and studies planned in this region, specifically in China compared with the other top five Asian countries based on overall number of trials – Japan, South Korea, India and Taiwan.  Our chosen course for exploring the clinical trial landscape is through Trialtrove, with a quick look at the therapeutic areas and the sponsors planning for success in the growing Asian market.

Sources, that previously analyzed Asian trial activity, noticed a fall in India’s trial starts and speculated that the more open field might benefit sites in China, South Korea, and other locations in Asia [[1]].  However, China’s issues with trial data security and reliability [[2]], compounded with an evolving regulatory environment, made China’s lead in 2016 study starts, relative to Japan, a surprise (Figure 1). A closer look at trial starts finds a decreasing trend in Japan’s trial starts, allowing China to move into first place. Japan’s drop of 38.1% in starts from 2012 to 2016 was not fully reflected in China’s increase of only 20.5%.  This drop in trials points to Japan’s own history with compromised data security and regulatory changes.  A rebound was anticipated by 2015 [[3]], however, the continued reduced numbers in Japan point to ongoing challenges. 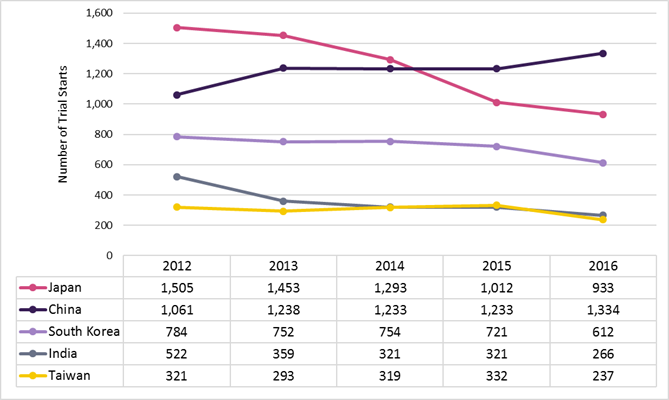 Trial numbers are limited to those for which a start date is provided in the public domain.  The numbers for recent years may also be impacted by delayed reporting of trial activity.

Interestingly for China, a more granular analysis comparing trials starting in 2012 to those in 2016 points to a noticeable downward shift in industry-sponsored studies (Figure 2). The overall percent of industry trials took a noticeable dive from 46% of trials initiating in 2012 to 29% in 2016. Major pharma’s discomfort with China’s clinical trial environment likely contributed to this decline.  India’s losses, starting in 2012, have clearly not benefitted China.  This change in sponsorship contrasts with both Japan and South Korea, where the industry-sponsored share of trial starts increased by close to 20%, reaching 58% and 62% in 2016, respectively. For Taiwan, although with a much smaller patient population, the trials have consistently been predominantly industry-sponsored.

Figure 2: Percentage of industry vs non-industry trial starts in 2012 and 2016 across major Asian countries 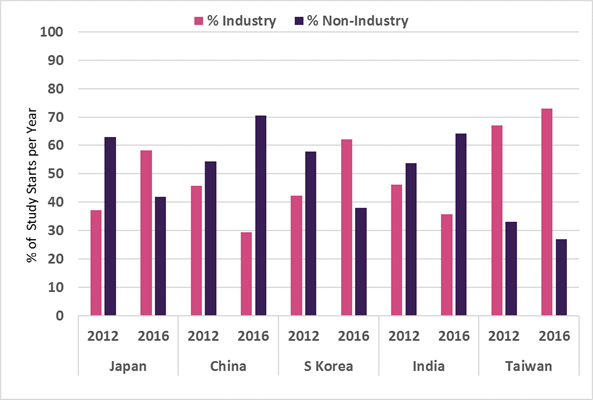 Looking forward, what picture do the numbers paint for pharma’s planned trial activity in Asia?  Specifically, where does China sit with the country’s recent commitment to the International Council for Harmonization of Technical Requirements for Pharmaceuticals for Human Use (ICH) [[4]]?  While planned trials will continue to be reported, the counts as of July 2017 suggest a change coming for China compared to the other top Asian countries (Figure 3). The planned industry-sponsored studies currently number 347 for China - greater than double the numbers reported for Japan (160 studies) and South Korea (143 studies).  Of note, too, is the high percent of early phase studies.  Previously, big pharma has been required to run early development in countries, other than China [[5]]. The numbers and phases support a change in course, perhaps reflecting greater optimism and expectations for China related to changes, in addition to the recent membership in the ICH.  Multiple factors must be at play that will warrant a more in-depth analysis, already planned by Citeline before year-end. 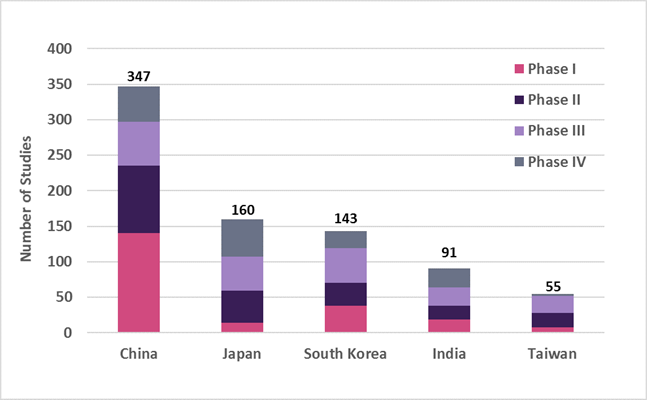 A review of activity in the primary therapeutic areas shows a continued predominance of planned Oncology trials in all five of the top Asian countries (data not shown). After Oncology, the top therapeutic areas representing the most trials differ. In China, more Cardiovascular and then Infectious Disease trials are planned.  Metabolic is highest for Japan, South Korea and India. Taiwan, with relatively fewer studies, shows slightly higher numbers in Autoimmune and Metabolic.

Turning to the sponsors, for those planned and ongoing trials that started in 2016, it seems many companies are planning for success in the Asian market (Figure 4).  Not surprisingly, nine of the top 20 companies are headquartered in Asia. In these five countries, Hutchison Medipharma and Mitsubishi Tanabe Pharma have studies only in Japan and China while Jiangsu Hengrui Medicine is conducting trials only in China, keeping activities close to home.

The clincial trial environment in China, while appearing steady at the top of the Asian countries focused on here, is mobile in its efforts to recover the confidence of the global pharma community and to shore up the regulations that will facilitate the development of new drugs.  As we head toward the end of 2017 with our global lens holding a strong focus on the Asian market, Citeline will continue to capture this evolving landscape.  Keep your focus here for Citeline’s comprehensive analysis of the climate and events pushing the changes in China and the very active Asian market.