The evolution of clinical research in East Asia: A preview

On June 9th, I’ll be speaking at Pharma CI Asia in Tokyo on the topic “The Evolution of clinical research in East Asia” so here’s a sneak peak of the type of data included in the presentation. The dataset for the presentation includes all initiated and planned Phase I to III industry linked clinical trials with a location in China, Hong Kong, Japan, South Korea, and/or Taiwan (Hong Kong and Taiwan were considered separately from China since all have distinct health regulatory agencies and individual trial registries). Initiated studies are defined as trials that are ongoing, completed, or were terminated after recruitment started, and this posting will take a quick look at how many trials were initiated per location as well as some enrollment trends from completed studies.

East Asia includes nearly 1.6 billion people, or 22% of the world’s population. The large majority are found in China, which reportedly had 1.4 billion people in 2013. Japan and South Korea are second and third with 127.3 and 50.2 million people, respectively. According to Trialtrove®, a total of 9,198 trials were initiated in East Asia as of 11 February 2015 and a location specific analysis found that population size does not reflect the level of clinical trial activity. Japan had the largest amount of trial activity by far (4,522 trials) and is followed by South Korea (2,951 trials). Despite the large population, China was included in 2,058 trials, which is less than half of Japan’s trial number. Taiwan was actually fairly active considering the small population of 23.4 million and wasn’t too far behind China’s level of clinical activity (1,793 trials). The smallest location, Hong Kong, also has the smallest trial number of 975. (Table 1) 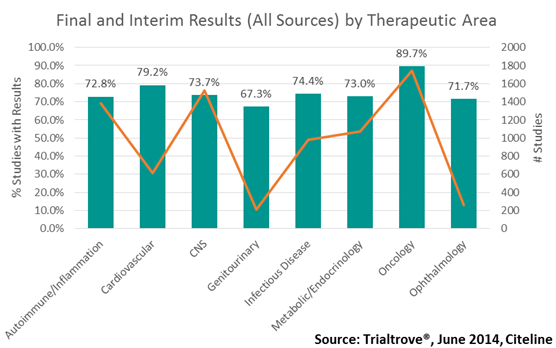 Trialpredict® data was leveraged for an enrollment trends analysis and focused on completed trials that provided actual timing milestones (i.e. dates of enrollment or study implementation) in the public domain. Some interesting trends emerge when reviewing enrollment data for the individual East Asian locations, which is depicted in Figure 1. Although Japan has the most clinical trial experience, Japanese trials enrolled the lowest average number of participants per month per trial. The highest accrual rate was observed in studies that included Hong Kong as a location (85.5 pt/mon), followed by China (76.1 pt/mon).

Please note that these accrual rates are calculations that are derived from enrollment durations, patient accrual figures, and number of sites reported in the public domain. These averages are not reported country or site specific rates. Also, the calculations do not account for the number of countries that involved in trial. If you’d like to know the impact that location may have on enrollment rates, as well as other trends for initiated and planned East Asia trials, see me speak in Tokyo or stay tuned for the whitepaper!