Trialtrove recently released a major enhancement that indexes primary and secondary endpoints evaluated in clinical trials. While text searching for endpoints terms is useful, the indexing of these endpoints provides more powerful tools to identify the important endpoints employed for each Trialtrove disease, and to analyze shifting trends over time. The enhancement also creates Endpoint Groups that include four broad categories: Safety/Toxicity, Pharmacokinetics/Pharmacodynamics, HEOR (Health Economics and Outcomes Research), and Efficacy, as well as more granular sub-categories within those groups. These categories add layers of insight onto each individual disease endpoint indexed with this enhancement.

This blog showcases an analysis of primary efficacy endpoints within several Autoimmune/Inflammation (A/I) diseases and focused on trials reporting positive outcomes for all primary endpoints (indexed as “positive, primary endpoints met” in Trialtrove) in two consecutive five-year time periods. Period 1 refers to trials completed over August 1, 2009 to July 31, 2014, while Period 2 includes trials completed between August 1, 2014 and August 15, 2019. The major primary endpoints that led to successful outcomes were identified and analyzed to see whether endpoint shifts occurred over time. For this analysis, the indications of chronic obstructive pulmonary disease (COPD), asthma, psoriasis, rheumatoid arthritis (RA), and osteoarthritis (OA) had the largest numbers of trials, providing a sufficient sample to reveal any trends.

The efficacy endpoint comparison for COPD trials (Figure 1) included Phase II and Phase III trials. Not all studies had primary endpoints for efficacy, so it is worth noting that data for Period 1 represent 84% of the total set of 154 trials, while the remaining 16% focused only on other Endpoint Groups (Safety/Toxicity, Pharmacokinetics/Pharmacodynamics, or HEOR). Figure 1 also shows similar data for Period 2. During that period, 89% of the total 74 completed COPD trials evaluated primary efficacy endpoints. For direct comparisons between the two periods, the percentage of each endpoint was calculated (# endpoints per phase/total trial # per phase). The main COPD efficacy endpoints are the top two lung function tests: percent change in FEV1 remained the most frequent measure across the periods in both Phase II and Phase III, while trough FEV1 usage dropped for Phase II trials run in the past five years (Period 2). Evaluation of several symptom measures (dyspnea and exercise endurance) also dropped in Period 2. Emergency room visits is the only efficacy endpoint that substantially increased over time, but it remained a minor endpoint choice. 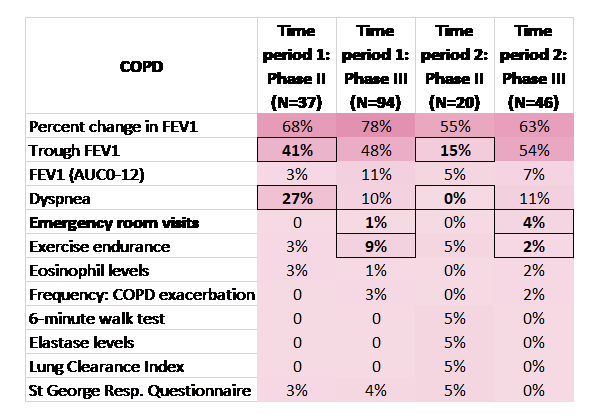 Asthma endpoints also focused mainly on lung function measures, with little change noted across the time periods (Figure 2). Peak expiratory flow rate (PEFR) usage shifted away from Phase III and more towards Phase II application. More recently, FEV1 (AUC 0–12) measurements became more popular in Phase II, while the counting of percentage of responders in Phase II dropped to zero. The use in Phase III of systemic steroid treatment, eosinophil levels, and frequency of asthma exacerbations as endpoints is noteworthy, as these reflect a focus on trials for treatment-refractory asthma subjects, including the eosinophilic asthma sub-population. In addition, such measures are also useful for payers and physicians in order to quantify the real-world effect of drug treatment. 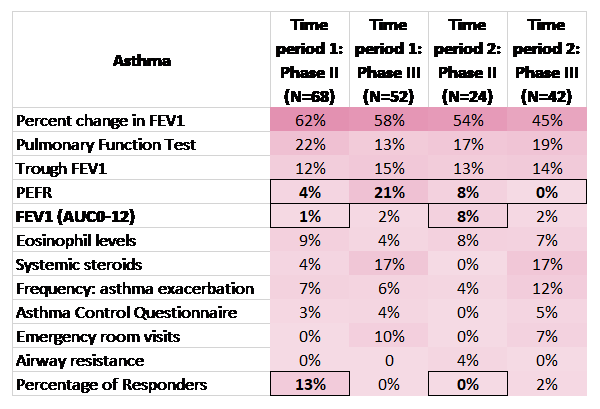 Analyses of the major efficacy endpoints for two autoimmune diseases, psoriasis and RA, are shown in Figures 3 and 4, respectively. In both indications, there was an observable trend towards choosing more ambitious outcomes in Period 2 studies, indicating the highly competitive dynamic between treatments and the need to demonstrate compelling clinical data. For psoriasis trials, which evaluated efficacy endpoints in ~88% of the trials completed during these periods, there was a major shift from PASI75 to PASI90, reflecting higher efficacy expectations for the drugs being tested during the latter period. Two patient assessment instruments (Clinical Global Impression and Physician’s Global Assessment) gained popularity in the more recent Phase II trials, while assessing change in PASI fell out of favor for Phase III studies during that period. 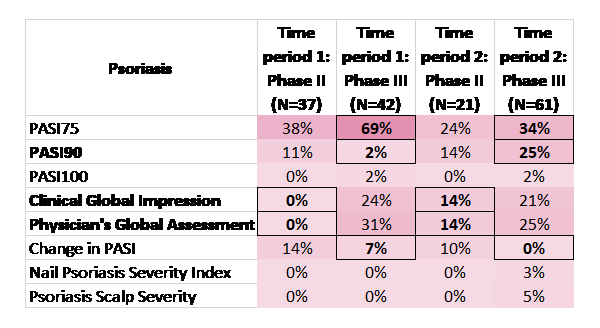 RA is a mature indication in terms of having a wide range of approved therapies. However, continued unmet need, due in part to treatment resistance, attracts continued clinical drug development for this large market. The most frequent primary efficacy endpoint continues to be ACR20 (Figure 4). However, there was an uptick recently in the more ambitious ACR50 and ACR70 assessments in Phase II, and achievement of clinical remission in Phase III. DAS28-CRP was used more frequently in the most recent Phase III trials, while the structural change measures – radiographic scores and RAMRIS – dropped off completely. 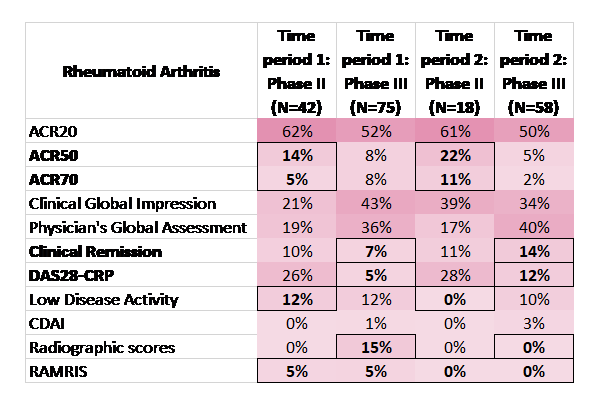 Osteoarthritis is another A/I indication that had substantial trial activity and returned positive outcomes during both Period 1 (38 trials) and Period 2 (52 trials). Figure 5 reveals that WOMAC pain assessment is the most commonly used instrument in OA. Use of both WOMAC pain and Brief Pain Inventory increased during the most recent period, as other pain assessment instruments, namely Numeric Rating Scale and Visual Analog Scale of pain, were less frequently employed. In contrast to RA trends, OA trials more frequently measure structural changes with radiographic scores and magnetic resonance imaging. Currently, pain relief remains the central focus in OA trials and disease modification is less apparent from the endpoints measured, pointing towards the fact that no OA drugs have been able to demonstrate improvements in the underlying disease activity. 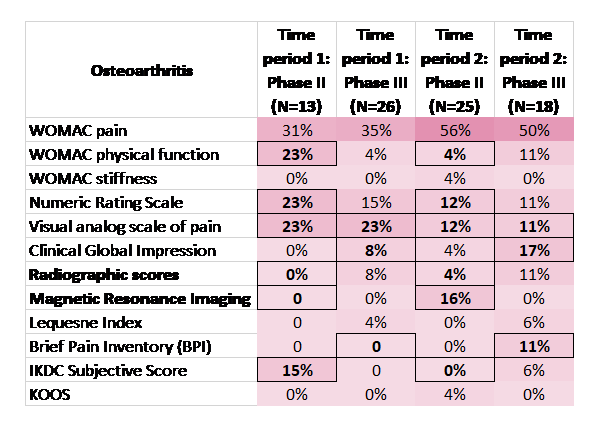 So, what was happening in psoriasis and RA trials that revealed these primary endpoint shifts? Among the psoriasis trials completed most recently, the PASI90 endpoint was successful in pivotal trials for first approvals of the novel biologics risankizumab and guselkumab, while the PASI75 endpoint was favored in trials evaluating older anti-TNF agents, including certolizumab pegol and various biosimilars. The endpoint shifts in RA were primarily in Phase II trials. Among the pivotal trials for new protein kinase inhibitors (baricitinib, upadacitinib, filgotinib, and peficitinib) and novel biologics (sirukumab and sarilumab), only a few pivotal Phase III trials for upadacitinib, sarilumab, and sirukumab evaluated more ambitious endpoints: clinical remission, low disease activity, or ACR50.

As these examples demonstrate, the directional movement in endpoints in A/I trials is variable across different diseases. Granular evaluation on the disease level is therefore recommended in order to capture the unique underlying dynamics within each indication, and even at the patient segment level. No matter what the business question, the new endpoint indexing in Trialtrove makes analysis of these key study design features both quick and easy.