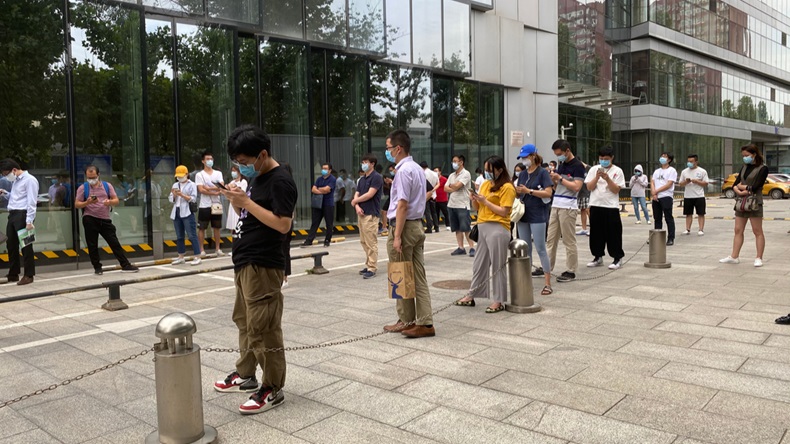 German biotech CureVac AG is to launch Phase I trials of its COVID-19 vaccine candidate, making it the latest among a wave of mRNA specialists to join the field.

The Tübingen-headquartered company has gained clearance to start trials in humans of its candidate, named CVnCoV, with the first volunteers to be dosed in sites in Germany and Belgium.

The company is joining high profile frontrunners Moderna Inc. and fellow German company BioNTech (partnered with Pfizer) in using novel mRNA technology, though none of them has brought a product to market so far.

The announcement made on 17 June came after months of speculation about CureVac’s future, with reports in March claiming that President Trump had sought a US government acquisition of the company, which were followed by the sudden departure of its CEO Daniel Menichella.

The German government stepped in to ensure that it could not be acquired by a foreign buyer, and on 15 June announced it was paying €300m ($338.5m) to take a 23% stake in the company.

CureVac differs from its rivals Moderna and BioNTech in using a form of mRNA vaccine that triggers an innate immune response. The company says this allows them to give much smaller doses, and consequently produce more doses more rapidly.

The Phase I dose escalation clinical trial will include 168 healthy subjects between the ages of 18 to 60, and will target a dose range of 2µg to 8µg. This is in contrast to the 25µg, 100µg, and 250µg range Moderna used in its Phase I trial, with it now selecting the 100µg dose for its Phase III trial.

CureVac’s Phase I study will aim to determine the optimal dose as well as to evaluate the safety and immune profile of the vaccine in humans.

“We are encouraged that we received green light from the regulatory authorities to start the clinical development of our COVID-19 candidate. During the last few months our team has put a lot of efforts into the preclinical validation of several vaccine candidates to select an optimal construct,” said acting CEO of CureVac, Dr. Franz-Werner Haas. “We are confident that our early optimization work will provide a safe and effective low dose vaccine. In parallel, we are already producing large quantities of this trial medication under GMP conditions.”

The company says if trials progress well, its product could be approved in Germany by mid-2021.

Another mRNA competitor has been developed by Imperial College in London. It uses a novel 'self amplifying' mRNA platform, and also entered Phase I trials this week. (Also see "Coronavirus Update: Imperial And Morningside Form Social Enterprise For COVID-19 Vaccine" - Scrip, 8 Jun, 2020.)

Beijing Back To Effective Lock-Down Amid Second Wave

After 137 new cases of confirmed coronavirus infections, Beijing has started re-imposing strict restrictions over a large part of the city. The new cases are all linked to the large Xinfadi market in the southern outskirt district of Fengtai. Since 17 June, China's capital has banned five categories of people from travelling outside the city, including those who have had close contact with the confirmed cases and asymptomatic cases.

Meanwhile, many restaurants and bars city-wide have again been told to shut their doors, with their workers required to go through mass testing after staff at two places were found to be positive. Diners have been advised to stay away during the testing period.

Beijing has lifted its official risk ranking once again from Level 3 to Level 2 to reflect the potential second wave. To help the contain the new outbreak, many companies are again implementing a work from home policy, while neighborhoods are re-imposing entry and exit controls over residents and visitors. For areas deemed to be high risk, only exit and no entry is allowed. For other neighborhoods, outsiders must register, show their health status code and have their temperature checked before entry.

Additionally, the municipal education commission released a notice stating that all primary and secondary schools, universities and kindergartens in the capital must close and all on-campus events be cancelled, effective immediately.

Although local authorities deny they are imposing an actual lockdown, over 800 outbound and inbound flights in Beijing were cancelled on 17 June, with passengers allowed to cancel their tickets or change itineraries without penalties.

The private Osaka-based venture has so far identified 18 compounds with potential activity out of 1,741 examined so far, including some for which efficacy against the coronavirus had never been suggested by previous research. 3CLpro binding affinity was confirmed for 11 using surface plasmon resonance methods.

Although it did not identify the specific compounds, Interprotein has applied for a medical use patent for part of the structure and is now preparing to start clinical studies in collaboration with other research partners.

If a therapeutic effect is confirmed, the company will file for an emergency approval and also plans to expand the clinical scope to less serious disease. The initial study will be conducted to a protocol developed by the Korea Institute of Radiological & Medical Sciences.

Nafamostat has already been evaluated in China for use in COVID-19 and is in several trials worldwide, including most recently those planned by India's Sun Pharmaceutical Industries Ltd. (Also see "Coronavirus Update: Lilly Begins Clinical Trial Of Antibody Therapy" - Scrip, 2 Jun, 2020.)

In a related development, the company, together with the institute and Institut Pasteur Korea, has reached a co-research agreement for nafamostat, which among 3,000 drugs tested by Institut Pasteur Korea showed the most potent antiviral efficacy against SARS-CoV-2. In virus-infected cultured cells, the coalition says the drug was approximately 600 times more effective than Gilead Sciences Inc.'s remdesivir, which already has emergency approval in the US, Japan and some other countries.

In the light of a recent study published by a German research team, researchers at Institut Pasteur Korea evaluated nafamostat, a TMPRSS2 inhibitor, using Calu-3 cells (a human lung cell line) instead of the Vero cells commonly used in SARS-CoV-2 research.

Although close to 130 trials are underway globally with vaccine candidates, there appear to be few oral products in the pipeline.