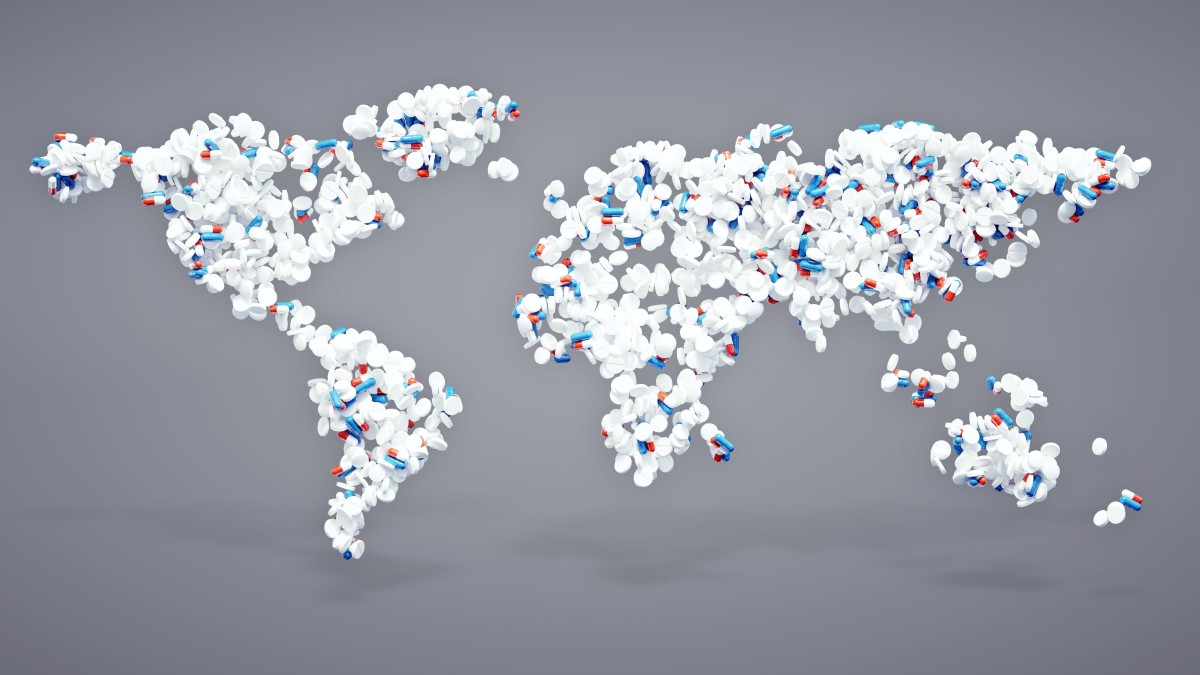 Nearly 800 new drugs and vaccines in development for COVID-19 boosted the total size of the biopharma R&D pipeline to 18,582 products at the start of 2021. There were 845 more drugs in development as the year began than there were at the same timepoint in 2020, of which 798 were for COVID-19 indications.

The number of novel drugs and vaccines launched in their first markets during the year also hit a record of 83 in spite of – and in part buoyed by – the pandemic. This figure was way ahead of the previous record of 68 in 2018.

Of these products, eight were for COVID-19 indications, as 2020 proved a superlative year for novel anti-infectives.

COVID-19’s effects on R&D meant that of all the therapeutic areas, anti-infectives posted by far the biggest percentage increase of any group, up by 22.4%, almost entirely due to the development of new therapies and vaccines against SARS-CoV-2. In contrast, in 2020, the number of products in development for infectious diseases declined.

Overall, the pharma R&D pipeline increased by 4.76% from the same timepoint in 2020 – a rate of expansion that was just half that seen in the record-breaking previous 12 months.

The data come from Pharmaprojects’ Pharma R&D Annual Review 2021, published by Citeline (part of Informa Intelligence) and based on a snapshot of the database taken on 4 January. A similar report has been published annually since 1993, allowing for meaningful comparisons to be made across the decades.

In the analysis, “pipeline” refers specifically to all drugs in development by pharmaceutical and biotech companies, from those at the preclinical stage, through the various stages of clinical testing and regulatory approval, and up to and including launch. Launched drugs are still counted, but only if they are still in development for additional indications or markets. Drugs for which development has stopped, or is complete, are not included.

If novel products for COVID-19 are discounted, the total number of new drugs added to the Pharmaprojects database during the year was 4,746 (5,544 in total), which compares with the 4,730 added during 2019, noted the report’s author, Pharmaprojects senior director Ian Lloyd. “So, by this metric, those new COVID drugs were just extra; the industry discovered almost exactly the same number of non-COVID drugs as in the pre-COVID days,” he said, noting that changes to editorial processes throughout the year may have been a complicating factor.

For the fifth year running, Novartis AG remained at the top of the table for pipeline size (Table 1), even with a modest increase in its overall pipeline size; once again it has originated the most drugs.

It was joined at the top this year by compatriot Roche Holding AG, which rose to number two thanks in part to three acquisitions: Promedior, Inc., Foundation Medicine, Inc. and Inflazome Ltd. during the year. The two Swiss firms are some way ahead of the falling third-placed Takeda Pharmaceutical Co. Ltd., although the Japan-based multinational held steady in terms of number of actual pipeline projects if not in rankings.

The highest climber in the top 10, and almost doubling candidates, was AbbVie Inc. following its acquisition of Allergan plc back in May 2020 – the year’s biggest takeover.

In contrast to last year, most companies (16) in the top 25 table are reporting larger pipelines now, even though their share of the whole is still declining. The top 25 companies originated 9.36% of all drugs in the pipeline this January, down from the 9.47% in January 2020, although the rate of contraction has slowed. The same is true for the share contributed by the top 10, which stands at 5.27%, falling from 5.40%. On the other hand, the percentage of the overall pipeline contributed by companies with only one or two drugs in their pipeline increased again to 19.36%, although the trend here is largely flat.

The data show that all the top 10 pharma companies have entered the fray against SARS-CoV-2 to some degree, and again the Swiss duo led the way in terms of raw numbers. Figure 2 breaks down the different types of approaches and some drugs can be classified in more than one category. Pfizer Inc., AstraZeneca PLC and Johnson & Johnson have already delivered COVID-19 vaccines to the market, while Novartis has the largest set of drugs for COVID-19 complications, with four of its six candidates being existing approved drugs repurposed for this use.

The slowed rate of expansion seen in the size of the pipeline over the last year is mirrored by the overall number of companies involved in development, the analysis shows. There were 5,099 companies involved in pharma R&D as of January 2021, an increase of 283, or 5.9%, over the previous year (see Figure 3). This compares unfavorably with 2020’s 11.4% expansion, but still easily beats the percentage increases seen in the previous two years.

And, as was the case with the pipeline, this modest increase masks considerable churn. A record-breaking 1,055 new companies were added to the Pharmaprojects database – meaning over a fifth of all companies were newly identified in 2020. In 2019, the figure was 809. “It’s possible that the high profile for pharma throughout the year provided fertile ground for start-ups,” said Lloyd.

A closer look at trends for therapeutic areas and diseases reveals the impact of the novel coronavirus.

As Figure 4 shows, anti-infectives posted by far the biggest percentage increase of any group, up by 22.4%, almost entirely due to the development of new therapies and vaccines against COVID. In 2020 the trend was downwards.

But anti-infective research is still dwarfed by the leading therapeutic area, anticancers. Despite the distractions, the pharma oncology franchise grew to 6,961 drugs in 2021, and expanded by a further 7.0%, outpacing the overall rate of pipeline growth once again. “However, this is just below half the rate seen in 2020, suggesting that the inexorable rise of anticancer R&D was perhaps somewhat dented by resources redeployed against the pandemic,” said Lloyd.

Apart from biotechnology, which is not strictly speaking a ‘therapeutic’ area but still included in the Pharmaprojects analysis, the other biggest therapeutic areas were almost entirely flat: neurologicals up just six drugs to 3,063, and alimentary/metabolics posting exactly the same number of candidates as last year, 2,599. These classes grew by 10.2% and 8.0%, respectively, last year.

Despite a slowing in its expansion rate this year, though, the proportion of the pipeline which is in development for cancer has continued to increase, despite the pandemic, with 37.5% of all drugs.

This year, there was a further significant increase in the overall number of cell and gene therapy products in development at 1,589 projects, up almost a quarter (24.8%) in a single year.

In terms of individual diseases, COVID-19 broke a number of records, from a flat start in January 2020 to 1,012 products for its treatment and prophylaxis, as well as to ameliorate the complications severe patients experience such as cytokine storm, just a year later. There are 553 drugs in the first class, 347 in the second and 266 in the third, bearing in mind that some products are classified under more than one category. 798 of these are new to the database. “A full 5.4% of the pipeline is for a disease virtually unheard of a year ago – that is some mobilization of the troops!” said Lloyd.

Figure 5 shows how many of each class of agent were added to the pipeline each month (note some programs cross classes), with newly identified therapies, prophylactics and complication therapies peaking in April, around the time of the peak of the first wave of the pandemic in Europe.

Despite the attention given to vaccines, therapeutics outnumber prophylactics by a factor of around 1.5. Around half of these are small molecule antivirals, of which almost 200 are not reformulations, suggesting that direct-acting antivirals or combinations thereof will have a future role to play in checking this disease.

Figure 6 shows the number of NAS launches per year going back to 2001, showing a clear upwards trend. The Citeline research focuses exclusively on new active substances (NASs): new chemical or biological entities where the active ingredient had received no prior approval for human use, and excludes the 92 new drug launches last year with reformulated or non-NAS moieties, or biosimilars.

While the pandemic did not seem to have any impact on the numbers of new drugs reaching the market, other data show that to a large extent companies had difficulties in making decent commercial inroads in the face of reduced patient visits to doctors and the need for virtual and hybrid drug launches. Preliminary data from IQVIA suggest COVID-19 significantly affected the trajectories of the drugs that launched last year, and many of the headwinds are expected to continue throughout 2021.

The flurry of activity to tackle the pandemic notwithstanding, 2020 was a less good year for novelty. Only 16 of the new products are deemed first-in-class – a higher number than the 14 first-in-class products launched in 2019 but a smaller proportion of the whole (20.3% compared with 28.6% in 2019).

Table 2 below gives the full alphabetical list of 2019’s new drugs, including trade names, companies involved in their launch, indication and whether or not they are first-in-class, are for rare diseases, and/or had orphan drug status.

Despite there being 82 NAS launches in 2020, Table 2 includes just 79 different products as two of them, both from Regeneron Pharmaceuticals, Inc., contained more than one NAS: the firm’s anti-Ebola monoclonal antibody concoction Inmazeb contains three separate NASs, while its COVID-19 therapy Regen-Cov contains two.

Gilead – which tops the table by virtue of having the better NAS launches/pipeline size ratio – delivered two anticancers, one antiarthritic, and one anti-infective, the COVID-19 treatment Veklury (remdesivir). COVID-19 also featured in Pfizer’s four offerings with its Comirnaty vaccine (with BioNTech SE), together with two products for cancer and one for neurofibromatosis.

In terms of the diseases for which NASs were launched, cancer this year has been usurped by anti-infectives. 2019 saw only five new agents for infectious diseases, but this shot up to 24 last year as five new therapies for Ebola added to the COVID-19 tally. (Indeed, the total would be 28 if Regeneron’s Ebola Inmazeb were counted as three separate agents and its COVID cocktail as two).

Even without the large contribution from COVID-19 and Ebola, 2020 would have been a good year for anti-infectives, with new products for HIV, hepatitis C, and a number of antibacterials.

Cancer had 22 new drugs, up on its 2019 total of 16 by some way. Together the two therapeutic areas, shared 58% of the NASs between them.

2020 was also a good year for neurologicals, picking up 11 new active substances, almost double the six seen in 2019.

One metric which changes little over the years is the preferred market for first launches. However, the US does seem to be loosening its grip slightly with 54% of new drugs debuting there in 2020, down from the 59% seen in the preceding year. Asia is showing its increasing importance to the industry with almost 20% of all NASs debuting in Japan, and China coming in third with seven homegrown debutantes. Europe only managed a total of 11 across all countries, and eight if Russia is excluded.