Approaching Dementia from All Angles

Approaching Dementia from All Angles

Unfortunately, there have been numerous failures of Alzheimer's dementia drugs in the past five years, which have prevented the industry from finding a cure to this devastating disease that affects millions.  It has become generally accepted that treatment should focus on earlier stages of the disease, and perhaps in this way, Alzheimer's can be prevented from progressing.  There has also been a focus to treat other types of dementia, beyond Alzheimer's, and maybe in this way the industry can find a treatment by approaching dementia from all angles.

While different types of dementia can sometimes be delineated by genetics, symptoms, or onset of disease, they do share some similarities, including biochemical and physiological.  For example, alpha-synuclein is a protein in Lewy Body dementia, that is also found in Parkinson’s disease dementia, and Alzheimer's dementia [1].  Tau protein is part of neurofibrillary tangles, a structural pathology associated with dementia, which in addition to Alzheimer's disease, has also been identified in frontotemporal dementia (FTD) and Parkinson’s disease dementia [2].  Mixed dementia, is where people have more than one type of dementia at the same time, the most common two types being Alzheimer's and vascular dementia.  But recently, researchers found that those with only two risk factors for vascular disease, had significantly higher levels of beta-amyloid present in their brains [3], suggesting a correlation of vascular dementia with Alzheimer's disease.

Citeline’s Trialtrove historically has captured world-wide Alzheimer's Dementia clinical trials, but based on client interest, have recently added other types of dementia to their disease portfolio.  Figure 1 shows the trial count by phase in each type of dementia (non-Alzheimer's), including mild cognitive impairment/dementia risk, in trials that have completed since January 2013 or are currently ongoing/planned.  Additionally, in each type of dementia, Alzheimer's patients may be recruited alongside them, and these trials are depicted by the line plot.  The dementia with the greatest number of Phase I-IV trials is Parkinson’s Disease dementia, followed closely by Lewy Body dementia.  The higher number of Phase IV trials in the Parkinson’s disease dementia and MCI/dementia risk populations, indicate a focus on testing already approved drugs in this set of patients. 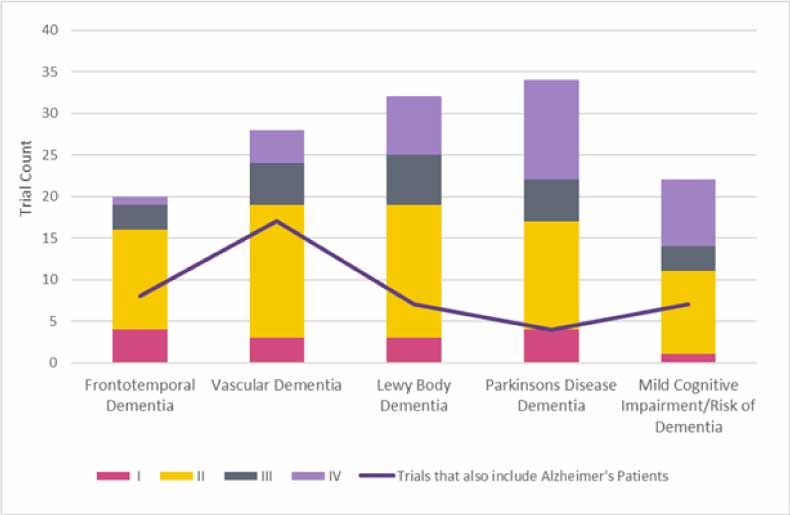 Figure 2 highlights the various mechanisms of action (MOA) for drugs in Phase I through Pre-registration development for Dementia (non-Alzheimer's). There are 10 different known MOA’s being pursued, with four companies having not divulged the mechanism of their candidates. 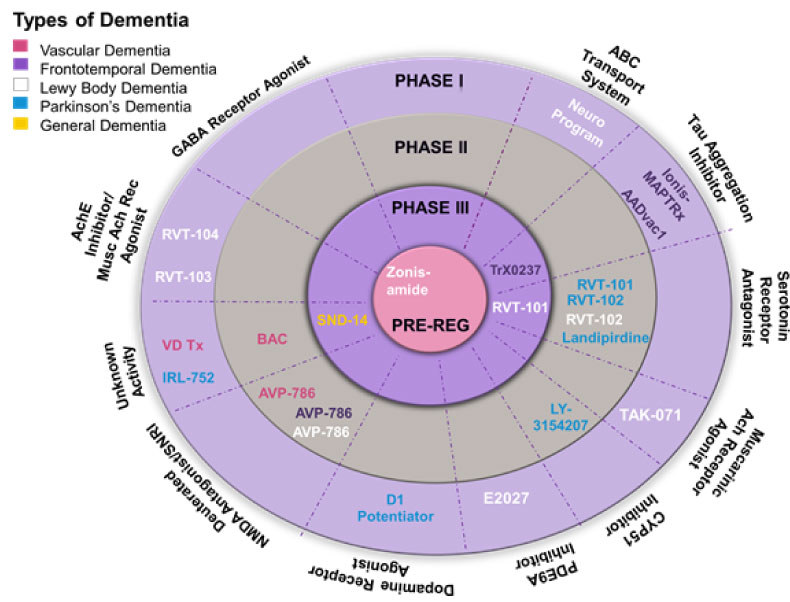 As stated earlier, there is no cure for Alzheimer's or any of the other dementias.  The treatments available only target symptoms such as cognition, mood and hallucinations, by inhibiting proteins such as acetylcholinesterase, serotonin, dopamine receptor, and glutamate receptor to name a few.  More than half of the drugs in development for non-Alzheimer's dementia are aiming to address the symptoms as well, but there are novel mechanisms being pursued that may address the underlying disease.

Three tau aggregation inhibitors are in development for frontotemporal dementia, which aim to disrupt neurofibrillary tangles.  Ionis Pharmaceutical’s MAPTRx is an injectable that is using antisense technology to inhibit tau, and TauRx’s TRx0237 is an oral inhibitor in Phase III.   Axon Neuroscience’s vaccine, AADvac1, is at Phase I to treat a specific type of FTD, primary progressive aphasia.  Phosphodiesterase 9A inhibitors have been shown to enhance synaptic plasticity and improve memory in preclinical cognition models [4].  Phase I and II studies for Alzheimer's and Schizophrenia are currently being conducted [5], and Eisai’s E2027 is also targeting this protein, with a Phase II trial in Lewy Body dementia being planned.

Despite recent failures in drug development for Alzheimer's, there is still hope for some drugs, in part, as they are also being pursued in other types of dementia.  Axovant’s intepirdine (RVT-101) was recently discontinued in Alzheimer's in Sept 2017 following primary endpoint results shown in the MINDSET trial [5].  Fortunately, development in Lewy Body dementia continues with the drug, a serotonin receptor antagonist, which is now in Phase III (Figure 2).  Axovant’s dementia pipeline is strong, with three additional compounds advancing behind RVT-101 in both Lewy Body dementia and Parkinson’s disease dementia.

Figure 3 shows the companies that have conducted more than one trial in dementia (non-Alzheimer's) in the past four years.  The three companies that have conducted the greatest number of trials are Eisai, Axovant Sciences and Eli Lilly.  The companies with the greatest number of Phase III trials have been TauRx Therapeutics and Sumitomo Dainippon, who have drugs in Phase III and Pre-registration respectively.   Pfizer, Eli Lilly and Novartis have been the only Top 20 Pharma (based on revenue), that have been in this space.  The majority have been smaller Pharma possibly looking to create a niche for themselves. 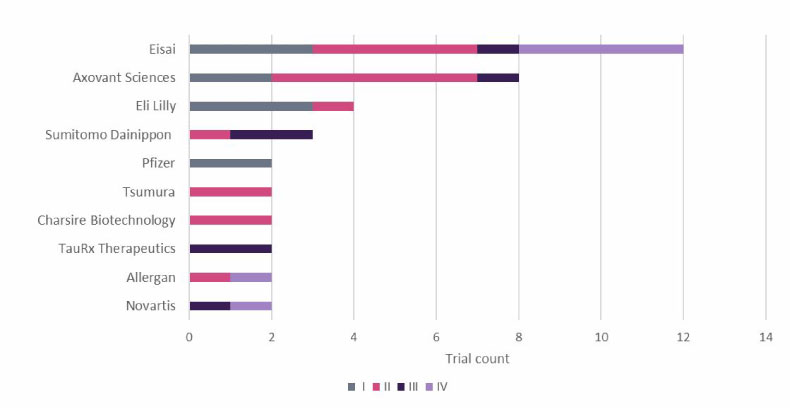 The preclinical landscape in dementia (non-Alzheimer's) looks promising to deliver some more first-in-class mechanisms that intend to treat the underlying disease of certain dementias. Four companies are developing inhibitors toward alpha synuclein, and three have tau aggregation inhibitors [5].  Most novel are inhibitors to tar dna-43 binding protein, which has yet to be in the clinic.  This protein has been implicated in axon growth, with mutations of the protein implicated in FTD [6].  It will be interesting to see how these drugs play out over the next five years.