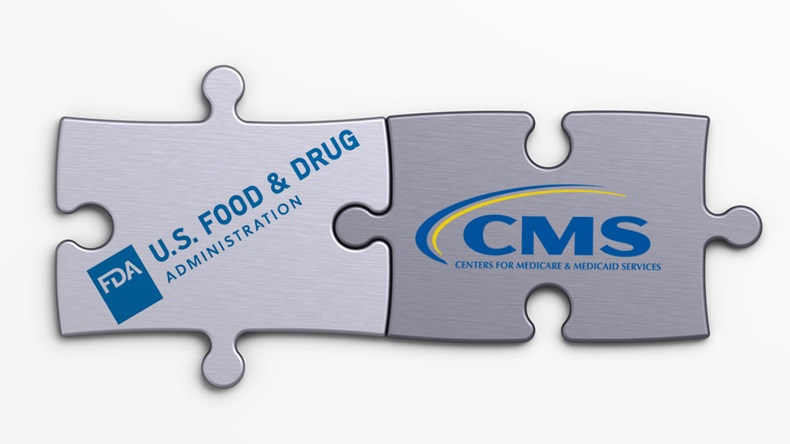 Since the medical device parallel review pilot program took effect in 2011, only two participating products have been green-lighted by US FDA and the Centers for Medicare and Medicaid Services. But that alone however shouldn't be the metric to judge its success Tamara Syrek Jensen, director of the evidence and analysis group at CMS suggests. She argues the program has opened lines of communication for formal and informal talks with the agency that weren't there before.

Speaking at the Medical Device Manufacturers Association annual meeting in Washington, D.C., on May 4, Syrek Jensen told attendees there has been a shift in how the agency operates over the past 18 years. She noted what people often don't realize is there is a great deal of work the reimbursement agency does behind the scenes that is similar to parallel review but isn't formally part of the program.

"While you're not seeing a lot of NCDs out there, what I think is really happening is a lot of work behind the scenes to develop evidence needed for a national coverage determination," CMS' Syrek Jensen says.

"Some would say that so far we've only passed two products," said Syrek Jensen. "What I would say is that there's a lot that goes on between the agencies outside the formal parallel review process."

The parallel review program is a central element to FDA-CMS collaboration in recent years. It allows the agencies to work concurrently to get a product through FDA's review processes while simultaneously being evaluated by CMS for a national coverage determination (NCD).

Medtronic also attempted the pathway for its Symplicity renal denervation hypertension device, but had to regroup after its pivotal trial failed to meet its endpoint.

A day before Syrek Jensen's talk, MDMA CEO Mark Leahey asked FDA Commissioner Scott Gottlieb about CMS and FDA collaboration and pathways to shorten the journey to market for medical devices at the same conference. Gottlieb said while there are priority review pathways for devices, the agency isn't able to do parallel review processes as a "routine thing."

"Right now [FDA's Center for Drug Evaluation and Research] seems to have more pathways, where you can do more collaborations with CMS," he added. "But I think we have a ready-made opportunity to work on these solutions right now. We are already working on highly-disruptive, novel products – but primarily on the 'Drug Side' of the house at FDA."

But Syrek Jensen emphasizes there absolutely are informal opportunities open to device companies right now. She said companies working with FDA to hone their clinical trial requirements under an investigation device exemption (IDE) don't need to wait until they are ready to market their product to get CMS' feedback. Instead, they can concurrently work with the agency to figure out what endpoints it will consider in a coverage decision. She emphasized that it is strictly up to the companies if they want to take CMS' advice into consideration.

Collaborations between CMS and FDA fall under a memorandum of understanding between the agencies that goes beyond the parallel review program. And there have been growing discussions in recent years about more ways in which the agencies can coordinate efforts, particularly as industry presses more for a quicker coverage pathway for breakthrough devices. (Also see "Breakthrough Reimbursement Proposals Percolate From FDA, Industry" - Medtech Insight, 8 Oct, 2015.)

Syrek Jensen points out that some companies prefer to avoid the NCD process as a business decision and look instead for a local coverage determination. In fact, the emphasis of the parallel review program on NCDs, and not local policies, has been one point of criticism of the program by industry. (Also see "Parallel Reviews Should Lead To Local Coverage, Coding Decisions, Firms Say" - Medtech Insight, 3 Jan, 2011.)

More Than Meets The Eyes

The reason CMS can't talk about the informal parallel review projects FDA and CMS are working on is they are required by law to keep the work confidential until the manufacturer is ready to make the issue public or when CMS posts a tracking sheet.

"In addition to FDA, CMS is also working with NIH. We're trying to develop evidence to support coverage determinations by coordinating efforts between FDA, NIH and CMS," Syrek Jensen added. "So while you're not seeing a lot of NCDs out there, what I think is really happening is a lot of work behind the scenes to develop evidence needed for a National Coverage Determination."

CMS declined to state how many applications are currently open and undergoing parallel review, arguing that is it prohibited to do so under statute.

During her talk at the MDMA meeting, Syrek Jensen noted CMS reviews 40 trials a month, but declined to specifically state if those were the number of overall trials or trials specifically to the parallel review program. An agency spokesperson said they are unable to provide specific numbers.

"CMS will not publicly disclose a sponsor being part of parallel review until the sponsor makes it public," said a CMS spokesperson. "The FDA statute doesn’t allow FDA to publicly disclose who is asking for FDA-approval. CMS does not want to get ahead of that process."

Part of the reason Syrek Jensen says people don't hear about some of this work is companies work with FDA on trial requirements and the trials themselves for a long time. After that, manufacturers come to CMS for an NCD.

These trials take not days, they could take years. But I would say this program itself has changed the paradigm of communication, which is why we're talking a lot more," said Syrek Jensen. "We're going to the FDA and have conversations with people who are going through the FDA."

Syrek Jensen says CMS has a lot of meetings with sponsors over the phone about what data they may need for coverage. Often, a company presents the agency with the trials its plans on submitting to FDA and, in return, CMS provides informal comments about data they should consider collecting to make a coverage determination easier.

"My point is, it's a very wide area. Whether you call it formal parallel review or not, it's a lot of communication between FDA, the sponsor and CMS, which I think is a positive because then they understand the system and they might be able to get through the system," she added. "You close that gap between the FDA and CMS;, that's the goal."

Beyond The Coverage Scope

The agency also said it was unable to provide specific numbers of how many applications have been rejected so far for the parallel review program since it began or how many are currently under review.

"We see many promising technologies both inside and outside of the parallel review program," said the CMS spokesperson. "We suggest sponsors talk to us early—especially before they’ve committed to a pivotal trial design. That’s the message sponsors need to hear: our door is open, come talk to us in person, via phone, or by any other manner."

However, the spokesperson did note sometimes sponsors withdraw their application when they determine an NCD is not in their business interest, or the program isn't a "good fit" for them, and sometimes applications are rejected because they don't meet the regulatory requirements.

The cases in which CMS has actually turned down a company's participation in parallel review have primarily had to so when the firm's target is outside of the Medicare population.

The most common reason to turn down a sponsor is because they are trying to bring a pediatric device to market, Syrek Jensen said. She notes NCDs are only covered under Part A and Part B of fee-for-service Medicare, which means CMS doesn't influence Medicaid.

There are also instances where the product doesn't fall under one of the statutory categories covered under Medicare.

A Change In Thinking

Syrek Jensen emphasized that the impact of the parallel review program has got beyond the specific devices that have been covered. “I think the parallel review program has changed everybody's thinking over the last 10 years...and that's not just about CMS but also about your [private insurers] too with really having that long-term vision of where we're headed,” she said.

Sponsors interested in the parallel review program should call or email (Parallel-Review@fda.hhs.gov or CDRHPayerCommunications@fda.hhs.gov) CMS to see if they are a good fit, according to Syrek Jensen

I think email is probably more friendly to most people; they like email versus calling," said Syrek Jensen. "I find email easy, when you think about it at 10 o'clock at night versus whatever work hours you run. You send that email and the parallel review people, whether at CMS or FDA, they answer very quickly.