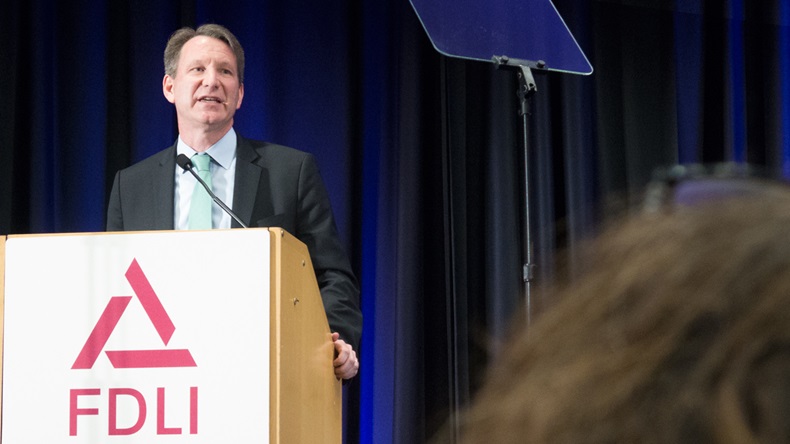 Acting US Food and Drug Administration Commissioner Ned Sharpless described a service-oriented take on his new gig during a 2 May speech at the Food & Drug Law Institute annual conference in Washington, DC.

“The relationship of a doctor and patient is like that of a lawyer and client,” he said, referring to the lawyer-heavy crowd at FDLI. “In both cases, the relationship is one of service. At the FDA, that patient or client is the public health of Americans.”

The metaphor is natural for the oncologist, who was director of the National Cancer Institute before joining the FDA last month. He’d been a cancer researcher in academia for almost 20 years before that. The move to the FDA allows him to advocate for recent advances in medical technology on a larger scale, he said.

“There will be no pause at FDA.” – Ned Sharpless

Sharpless emphasized that he doesn’t expect any major changes at the FDA under his leadership, and the recent focus on innovation and efficiency will continue.

“[Department of Health & Human Services] Secretary [Alex] Azar and the White House made it very clear to me that they have been impressed with the things that FDA has been accomplishing and they don’t want to disrupt this strong progress. There will be no pause at FDA,” Sharpless said.

The plan is based around recent changes to the agency’s postmarket surveillance, 510(k) and de novo review processes. It also includes a final guidance on the Breakthrough Device Program and plans to establish a new Safer Technologies Program (STEP), Sharpless said.

In a nod to his predecessor Scott Gottlieb's unfinished priorities, Sharpless said he would continue to work for a legislative fix that will allow the FDA to regulate allin vitro diagnostics, including lab-developed tests (LDTs) and diagnostics produced by conventional manufacturers. The area has been a source of controversy in recent years, as a regulatory plan developed during the Obama administration was scrapped after considerable industry criticism. Current thinking at the FDA is that legislation in the books doesn’t allow the agency to regulate LDTs via guidance alone. (Also see "Unfinished Business: LDT Legislation A Top Priority For Departing FDA Chief Gottlieb" - Medtech Insight, 22 Mar, 2019.)

Sharpless concluded his remarks by calling for more efficiency and collaboration across the agency, which he said would allow new technologies to reach patients more quickly. Additionally, he said the agency should look at whether its organizational structure produces maximum efficiency.

“As a biomedical researcher, I learned that disease doesn’t respect or recognize the silos we’ve created between basic and applied research; between clinical care and drug development; or between the disparate systems providers use to guide patient care,” he said. “If we want to harness the full potential of therapies to transform care, we need to become more efficient, more collaborative and more data-driven so that we can learn from every patient’s journey.”