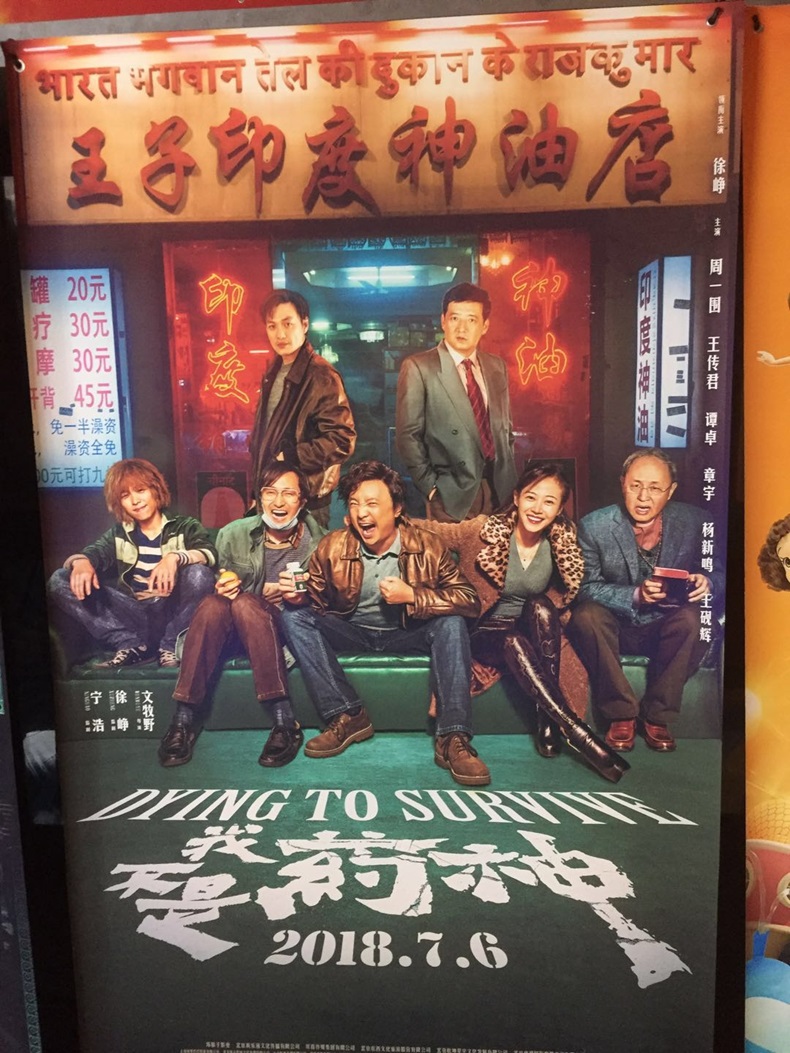 Already facing official pressure to cut drug prices, makers of high-priced cancer products in China have another potential crisis to deal with: rising public resent over the lack of access to cancer drugs, stirred up by a widely popular movie.

"Dying to Survive" is based on a true story. A Shanghai-based businessman selling Indian herbs, Lu Yong, found himself in the cross-hairs after a cancer patient pleaded to him for help. The patient was suffering from chronic myeloid leukemia and could not afford highly effective treatments. In despair, the patient proposed a business idea to Yong, to bring in cheaper Indian generic drugs and sell these to local CML patients.

As they were not approved in China, the Indian generics were deemed to be illegal, and selling them would be a punishable act subject to years in prison.

Yong tested the waters anyway and the initial transaction blossomed into a hugely lucrative business. Soon, droves of patients started lining up in front of his shop to buy the drugs.

Yong was later arrested during a police raid and sentenced to five years in jail, but freed two years after his sentence was reduced for “helping the poor patients”.

The success of Dying to Survive has drawn Chinese national attention again to the prices of cancer drugs, many of them manufactured by multinationals and not covered by the National Drug Reimbursement List (NDRL) or provincial reimbursement lists before 2015, when the events began unfolding.

Since 2015, when Zhejiang province started covering 15 high-priced drugs such as Gleevec (imatinib), Iressa (gefitinib), Herceptin (trastuzumab), Erbitux (cetuximab), and Alimta (pemetrexed), the prices have gradually decreased. In return for coverage, Zhejiang cut the prices by around 19% on average.

In 2017, 15 cancer drugs were also incorporated into China’s NDRL, including Mabthera (rituximab), Herceptin, and Velcade (bortezomib). Gleevec was put on the list and 80% of its treatment costs were covered, substantially reducing the individual burden of CML patients from roughly CNY21,000 ($3,150) before the coverage to CNY2,200.

Entering 2018, the attention on cancer drugs prices seemingly reached new heights, and the government has taken several high-profile measures including cutting tariffs and taxes to appeal to the public.

One measure included lowering import tariffs for anticancers from 3-6% to zero. Later, the government reduced the value added tax (VAT), which accounts for a large portion of imported drug prices, from 17% to 6%.

Such measures aside, the government also took a more personal approach to the issue. During a trip to Shanghai, Chinese Premier Li Keqiang made a stop to visit Roche's campus, making a point that cancer drug prices need to be affordable.

More price cuts could be on the way, partially fueled by the wide popularity of the movie and the continually rising pressure, observers say.

Furthermore, some say the fact that a domestic film with a Robin Hood-style rebellious message has cleared the screening authorities in what is a tightly-controlled environment for foreign movies shows that the government is willing to tackle the issue and further pressure drug makers, meaning more downward trends for high-priced cancer drugs could be forthcoming.

Also, the success of the movie could prompt policies that support growth in the approval, manufacturing and supply of domestic anticancer generics. So far, many who have seen Dying To Survive have expressed a profound feeling that made in China generics, although available on the market, have been unable to gain wider traction and compete with originator drugs.

Some official steps have already taken place. In April, the government issued Circular No.20, Comments On Reforms of Policies to Improve Supply and Use of Generic Drugs, aimed at making drugs more accessible and affordable, including widely prescribed products for cancer.

These latest moves coupled with ongoing requirements for bioequivalence testing and incentives for products that have passed such testing, may well bolster the domestic generics sector as part of an inward push to cut cancer drug prices.

In other initiatives, China is also offering tariff relief to India and a potential opening to Indian cancer drugs to enter China legally. However, the potential "Panda Meeting Tiger" route will be a bumpy one, experts and analysts from the Indian pharma industry say.

Could Chinese patients and the overall healthcare system benefit from increased access to cut-price Indian anticancers?

The popularity of Dying to Survive has obviously impacted the Chinese Ambassador to India Luo Zhaohui, who recently tweeted about the movie being a “black comedy”. “Reflect how Indian medicine is welcomed by Chinese people,” the ambassador tweeted on July 6.

But industry experts believe that it will take much more than just a successful film to steer any increased Indo-China bonhomie in the pharmaceutical space.

In particular, the Indian pharmaceutical industry appears to be keeping close watch on the unfolding US-China trade tit-for-tat; they believe China’s approach to genericization may well hinge on how these frosty relations eventually shape up. (Also see "Can Pharmas Come Out Unscathed As China-US Trade War Escalates?" - Scrip, 11 Apr, 2018.)

Dilip Shah, secretary general of the Indian Pharmaceutical Alliance, which represents leading Indian firms, told Scrip that a lot would depend on how China decides to “pull back” from the trade war with the US. If it opts to “appease” the US on intellectual property rights (IPRs), it is unlikely that there would be any significant change in its attitude towards generics and access, he said.

“On the other hand, China can also leverage IPRs to take on the US and not go beyond the [World Trade Organization's] TRIPS Agreement [on IPRs]. That would open up China’s market for affordable quality products from India,” Shah, a former commercial director of Pfizer India, predicted.

IPR issues have been a long-standing prickly issue between the US and China, with the US Trade Representative keeping China on the Priority Watch List for the 14th consecutive year in its most recent Special 301 report.

In the pharmaceutical space, the US has also been pressing China on a range of issues such as providing effective protection against unfair commercial use, as well as unauthorized disclosure, of test or other data generated to obtain marketing approval for pharmaceutical products.

It is also demanding that China expedite its implementation of an effective mechanism for the early resolution of potential patent disputes.

Meanwhile, though China lifted import tariffs on 28 drugs including anticancers effective May this year, the Indian industry claims it is actually more concerned about the remaining non-tariff barriers that impede market access.

Despite these lingering concerns, the Indian government too has been keen to facilitate the export of generic drugs to China. India’s Department of Commerce in coordination with the Embassy of India at Beijing had earlier commissioned a study on “Enhancing Indian Exports of Pharmaceutical products to China” under the Market Access Initiative Scheme to better understand the Chinese market and help the Indian pharma industry shape their China entry strategies for generic drugs.

The study examines a range of issues including the pharmaceutical market, the distribution system, procurement and bidding processes, and the regulatory landscape in China. It also provides recommendations on how to access the Chinese market and is reported to underscore the importance of joint ventures, given the seeming preference given to domestic players under the Chinese procurement and tendering process.