Since its discovery in 1976 near the Ebola river in the Democratic Republic of the Congo, Ebola virus has stalked Africa, sporadically reappearing from its suspected (but yet unknown) animal reservoir [1]. Its latest outbreak in May 2017 was swiftly contained thanks to experience gained during the 2014-2016 outbreak across West Africa. After a frantic pace of development since early 2014, the world now has a clinically effective vaccine available to counter further outbreaks [2].

But how ready are we for another outbreak and how effective will our pharmaceutical arsenal be when it occurs? A look at the Ebola treatment and prophylaxis development pipeline [Figure 1] shows a robust pipeline with a number of clinical programs underway. The majority of projects are still preclinical or Phase I but all the Phase II/III candidates are currently in ongoing trials with results generally expected in late 2017 or at some point in 2018. While many drugs never make it beyond the preclinical stage, the relatively large number of preclinical programs indicates that at least some more clinical candidates can be expected to emerge.

Figure 1. Ebola treatment and prophylaxis development pipeline as of July 2017 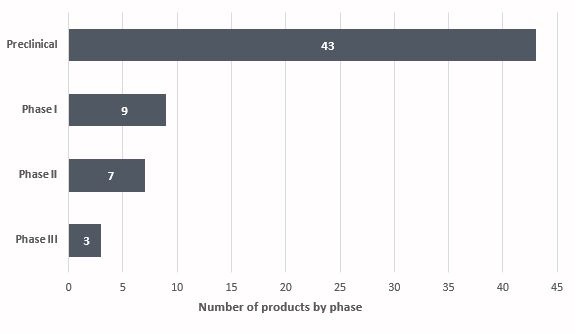 However, throughout much of the forty years since its discovery, Ebola has never been a popular focus for development or research funding. A study by the University of Edinburgh in 2015 estimated around half of all funding for Ebola research since its discovery occurred in the 2014-2015 period after the outbreak in West Africa [3].

When looking at historical data available from Pharmaprojects [Figure 2], this observation certainly seems borne out. The figure shows a nearly fourfold increase in active projects from 2013 to 2014 and the number peaks in 2016 with 79 active programs. Previous to the 2014 outbreak Ebola development was limited to a small number of vaccines and antivirals, largely funded largely by military sources due to worry about Ebola’s potential use as a bioweapon [3].

Figure 2. Vaccines and drugs under active development for Ebola virus treatment and prophylaxis 2000-2017 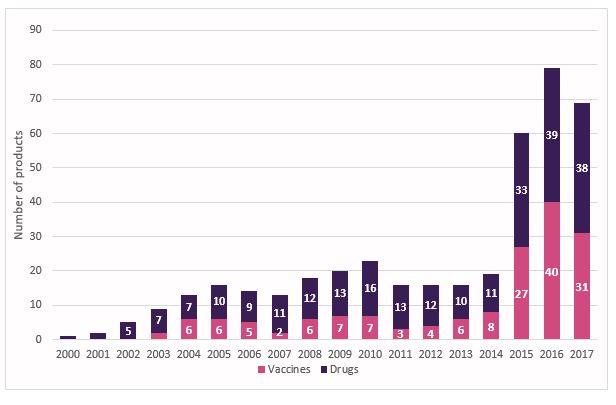 Interestingly, the number of active products for 2017 has reduced from the peak of 2016, as projects have been dropped or failed but no new candidates seem to be appearing to fill the space. This loss of commercial interest is likely due to the control of the outbreak and subsequent reduction of funding sources as well as a late-phase vaccine which has demonstrated high efficacy in Phase III clinical trials.

Merck’s promising vaccine, rVSV-ZEBOV, is a great step forward in the ability to combat Ebola but this reduction in research is worrisome as rVSV-ZEBOV is not without its limitations. It requires a reliable ‘cold chain’ to maintain its temperature at -80°C almost to the point of delivery and many of the remote locations would require deployment with very limited transport infrastructure and associated logistical difficulties.

In an unusual move, GAVI, the Vaccine Alliance has agreed a deal to stockpile rVSV-ZEBOV before it is even approved [4]. Despite this existing stockpile (of around 700,000 doses according to Merck) the vaccine was not deployed against the 2017 outbreak in Democratic Republic of Congo (DRC) due to these logistical difficulties and the small scale of the outbreak. In this case, the health authorities did not decide to push forward with vaccine deployment due to delays in acquiring approval for deployment, the small size of the outbreak and worries about cost. Thanks to a rapid response from health authorities and experience gained over the preceding years, the DRC outbreak was announced as ended on 2 July 2017 without the assistance of Merck’s vaccine. At this point the first real-world deployment of rVSV-ZEBOV is yet to occur [5].

The current vaccination strategy used for rVSV-ZEBOV, and the only one tested in clinical trials so far, is ring vaccination of an infected individual’s contacts. While ring vaccination is a strategy that has proven effective in the past, with perhaps its greatest success being the elimination of smallpox, it has limitations in containing outbreaks early on [6]. There is also no evidence at the current time that the Merck vaccine provides long-term protection or would potentially be suitable for large scale population immunization. Such testing requires further clinical trials, and it may be that the vaccine is only effective for a limited amount of time.

While health authorities have gained large amounts of experience with combatting and containing Ebola, the search for a treatment is still ongoing. As highlighted above, the Merck vaccine has its limitations and is for prophylactic use only, so despite the impressive strides made bringing forward so many candidates so fast, further development is still needed. At this point in the development process, continued investment is required to move both vaccine and treatment candidates through clinical trials and seek approval from regulatory bodies. However, the decreasing number of active projects seems to indicate a waning interest from the world as Ebola falls from the headlines. We must at this point hope that the current development pipeline is sufficient and that one day soon, we can be assured of an effective toolset with which to prevent a tragedy like the 2014-2016 outbreak from occurring again.

[2] Amy Maxmen (2017), Ebola vaccine approved for use in ongoing outbreak. Available from: https://www.nature.com/news/ebola-vaccine-approved-for-use-in-ongoing-outbreak-1.22024 [Accessed 30 May 2017]