Endometriosis – 176 million women and no cure in sight?

Currently there is a clear unmet need for endometriosis treatment and a significant opportunity due to large patient numbers worldwide (estimated at 176 million), limited efficacy of available on and off label options [1] and the non-curative nature of current and upcoming therapies. Endometriosis is an estrogen-dependent disorder where endometrial tissue that typically lines the uterine wall grows outside the uterus. This occurs in an estimated 10% of reproductive aged women, rising to 30-50% in those who experience infertility or abdominal pain. Costs associated with this condition are immense at approximately $19-22 billion annually in the US alone. [1]

Although endometriosis was first described over 100 years ago, its causes remain unclear (there is likely a strong genetic component linked to chromosome 10 [2]) and there is no known cure. Common treatments such as surgical ablation or endometriosis excision have very high recurrence rates, even when combined with post-surgical hormonal treatments (i.e. with gonadotropin-releasing hormone (GnRH) agonists). Off label treatment with oral contraceptives is also common but suffers from the same issues as the approved hormonal therapies. [5] Endometriosis is also known to persist even after multiple surgical treatments or a hysterectomy. [3]

The most common pharmacological treatments are the largely off label hormonal contraceptives, progestogens and GnRH agonists, comprising eleven of the thirteen separate drugs approved specifically to treat endometriosis. The odd ones out are interleukin-2 and a plant product that downregulates estrogen and upregulates progesterone. (Figure 1) 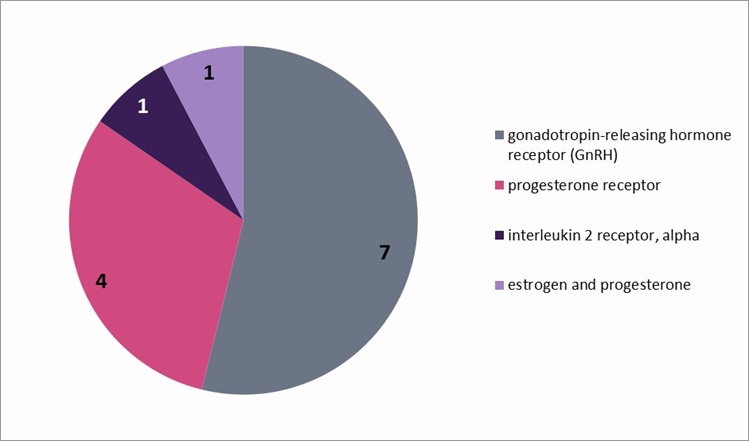 Sanofi is notable for having four launched endometriosis drugs: three GnRH modulators and a synthetic progestogen derivative. Other companies have no more than two, with many having only a single drug.


Despite the available approved treatments and widespread use of oral contraceptives as a management measure, the Practice Committee of the American Society for Reproductive Medicine states “Endometriosis should be viewed as a chronic disease that requires a life-long management plan with the goal of maximizing the use of medical treatment and avoiding repeated surgical procedures.” [4] Due to the large diversity in individual patient responses to the available therapies, there is no single effective option to manage endometriosis and no definitive cure, which as noted above has a high propensity to recur throughout the patient’s life.

A further twenty seven drugs in the pipeline are distributed throughout the clinical stages. (Figure 2) Bayer is the most prolific with eight investigational drugs, six of which are in clinical trials (one phase III, one phase II and four phase I). The Phase III drug, Yaz Flex, is already launched as an oral contraceptive and targets estrogen + progesterone while the Phase II BAY-987196 is also a contraceptive but targets cytochrome P450 + progesterone.

Most companies only have a single pipeline drug, except Abbott, Astellas, Merck, Nobelpharma and Teva who are all pursuing two candidates. Interestingly Sanofi does not have any pipeline drugs for endometriosis treatment other holding US/Canada marketing rights to Eligard (a formulation of leuprolide acetate launched for prostate cancer) which was considered for endometriosis by Atrix but never progressed to clinical trials.

Figure 2. Number of drugs in development for endometriosis

The pipeline for endometriosis has a surprising proportion of candidates in later stages of clinical trials, it is also more diverse than the currently approved treatments. While GnRH, progesterone and estrogen remain the most common targets, just under half of the drugs target other mechanisms, alone or in combination with GnRH, progesterone or estrogen. This limited number of early stage compared to later stage candidates is likely because seven of the eleven phase II/III candidates are in development or launched for oncology or contraceptive indications and are likely either being developed for endometriosis as a secondary indication or are now being trialed after successful off label use was reported for endometriosis and thus have entered the clinic after having completed basic safety trials for another indication. [7]

Unfortunately the later stage candidates are all similar to the currently available options, being largely dependent upon modulation of the three common targets and thus do not offer a high likelihood of any breakthrough treatments or a cure should they become approved and available. However, there are a number of phase I and preclinical candidates that feature new targets and mechanisms. (Table 1)

Table 1. Targets of drugs in development for endometriosis 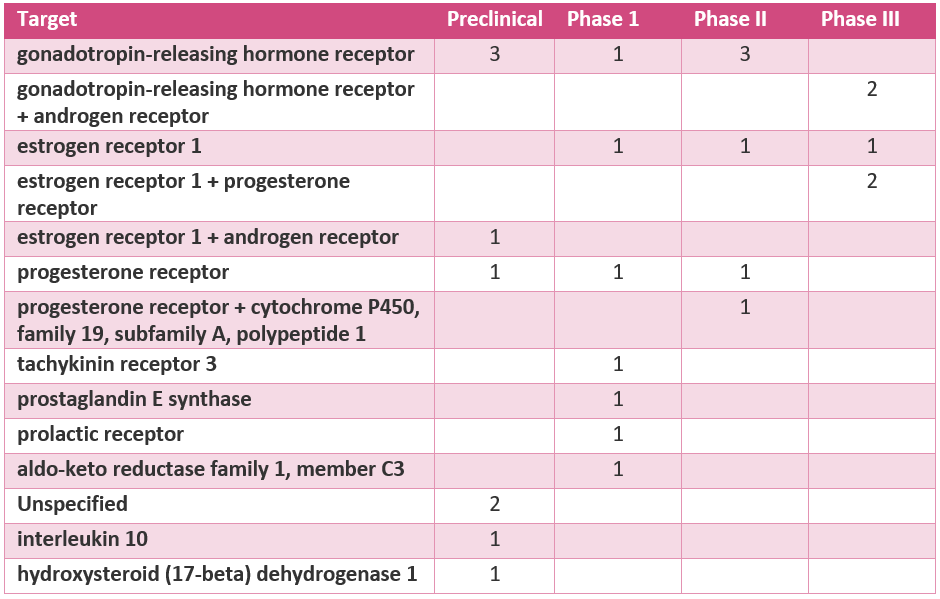 Due to the early stage of these drugs, it is impossible to predict their eventual outcomes or efficacy. Even if finding a cure remains unlikely, the hope is that new treatment options will allow patients to effectively manage their symptoms and greatly reduce the morbidity associated with the disease. Recent findings indicating that the estrogen receptors in lesions are different from those found in normal reproductive tissue promise hope for more targeted drugs in the future. [6]