In February 2017, Merck & Co announced the discontinuation of verubecestat’s Phase II/III study, EPOCH, in mild to moderate Alzheimer’s disease due to the high likelihood of missing the primary endpoint. The external Data Monitoring Committee (eDMC) conducted an interim safety analysis of the EPOCH study, and while no safety signals were reported, a futility analysis suggested that verubecestat was unlikely to demonstrate efficacy, leading to the study halt. While the results have not been released, Merck & Co indicated that the data analysis will be presented at an upcoming scientific meeting. Despite the halting of the EPOCH study, the eDMC recommended the continuation of verubecestat’s APECS study in subjects with prodromal Alzheimer’s disease, crediting the lack of safety concerns. While the assumed failure of the EPOCH study is yet another example that may help to further discredit the amyloid hypothesis, clinical trial design limitations − a common theme accounting for the failure of past disease-modifying therapies − could again be the underlying cause.

The EPOCH study (ClinicalTrials.gov identifier: NCT01739348) was initiated in November 2012 and consisted of two parts, including an extension phase. The goal of the first part of the study was to assess the safety and efficacy of verubecestat in subjects with mild to moderate Alzheimer’s disease. Patients were randomized to placebo or one of two verubecestat arms, receiving 12mg and 40mg administered daily, for 78 weeks. Subjects were then evaluated for changes in cognition and function, using the Alzheimer’s Disease Assessment Scale – Cognitive Subscale (ADAS-Cog) and Alzheimer’s Disease Cooperative Study – Activities of Daily Living Inventory score (ADCS-ADL), respectively. A third verubecestat dose, 60mg, was also evaluated as a safety cohort. An interim safety analysis was conducted when the first 200 participants in all study treatment groups reached 13 weeks of treatment, or discontinued treatment before completing 13 weeks. Had the outcome of the interim study been positive, patients receiving 60mg would have switched to the lower 40mg dose for 78 weeks. Participants who completed part one of the study would have then participated in a long-term extension study where verubecestat was to be administered for an additional 260 weeks.

In November 2012, Merck & Co progressed verubecestat into Phase II/III development, marking it as the first BACE (beta-site amyloid precursor protein cleaving enzyme) inhibitor to reach this stage in clinical development. While verubecestat gained the upper hand in its development timeline, Merck & Co failed to lead the way in clinical trial design and heed the theory that amyloid-targeting drugs would have the best likelihood of demonstrating efficacy if patients can be identified at the earliest stages of disease. This is reflected in the trial design of the EPOCH study, whereby verubecestat was evaluated in subjects with mild to moderate Alzheimer’s disease. Furthermore, there was no prerequisite for eligible patients to have their amyloid pathology confirmed by positron emission tomography (PET).

As a BACE inhibitor, verubecestat can significantly reduce brain amyloid-beta production, as evidenced by its Phase Ib results. While the futility analysis of EPOCH suggests that verubecestat’s biological efficacy would not necessarily translate into a clinical effect, the amyloid hypothesis is not definitely discredited by this result, considering the inappropriate patient targeting. Indeed, research has shown that while beta-amyloid build-up is the earliest detectable change and one of the central hallmarks of Alzheimer’s pathology, the rate of amyloid-beta accumulation slows down as the disease progresses in severity (see the figure below). This suggests that treatment with an amyloid-targeting agent is most beneficial when administered early in the disease. 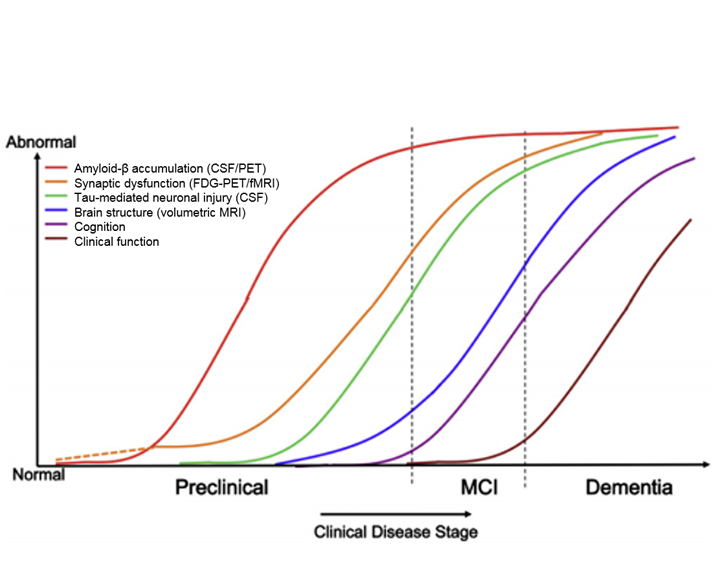 This view was also endorsed by findings from Eli Lilly’s EXPEDITION 1 and 2 studies of solanezumab in mild to moderate Alzheimer’s, whereby an efficacy signal of the amyloid-targeting antibody manifested only in the mild patient subgroup. Following up on these efficacy hints, Merck & Co decided to conduct another Phase III trial – the APECS study – evaluating verubecestat in prodromal Alzheimer’s patients (ClinicalTrials.gov identifier: NCT01953601). The hope is that verubecestat’s biological potency, along with the appropriately designed APECS trial, will overshadow the negative EPOCH trial.

Developers of BACE inhibitors should keep their resolve

While the failure of the EPOCH study is disappointing for the outlook of BACE inhibitors as potential Alzheimer’s therapies, the information available does not necessarily discredit the amyloid hypothesis. The result simply validates the fact that amyloid-targeting therapies administered in subjects with mild to moderate Alzheimer’s disease do not offer clinical benefits. Indeed, there are a number of BACE inhibitors currently undergoing clinical development that have adjusted their trials by addressing specifically prodromal subjects. Confirming the presence of amyloid pathology using PET scans is equally important, as well as ensuring that appropriate doses are being evaluated to maximize the likelihood of a clinical effect. Thus, to efficiently validate (or invalidate) the amyloid hypothesis, conducting clinical trials with proper and well-supported trial designs will be key. In addition, while the amyloid pathology is one piece of the puzzle, it may also be beneficial to have a combination therapy that addresses the multiple underlying mechanisms of Alzheimer’s − a concept that is slowly emerging in preclinical studies.

The lack of a safety signal in EPOCH should also reassure Merck & Co and other developers as to the potential risk-benefit profile of the BACE inhibitor class. While the safety profile of verubecestat has been consistent across its Phase Ib and EPOCH studies, this was not the case with past developments of BACE inhibitors. Indeed, Eli Lilly stopped development of its BACE inhibitor, LY2886721, due to liver abnormalities. This particular safety signal does not appear to have been a class-wide effect and consequently does not impact the viability of BACE inhibitors as a therapeutic class.