Over the course of the last six months or so, three more notified bodies have ceased operating under the Medical Devices Directive (MDD), continuing the downward trend as these testing and certification organizations grapple with the increasingly stringent enforcement of current EU requirements.

Turkey, Hungary and Italy now each have one fewer notified body under the MDD. Italy still has nine, however, nearly the same number as Germany, which has 10. Hungary has two remaining and Turkey has four left, according to the European Commission's Nando database.

Otherwise, the picture under the current directives has been more or less static. But predictions are that the number of notified bodies will continue to fall as the EU transitions from the directives to the new Medical Device and IVD Regulations, which enter into force on May 25 and will raise the bar even further for notified bodies.

This decline in notified bodies from the 80 or so that existed in the early 2010s to just above 50 now is due to the introduction of tougher requirements and tougher oversight advanced by the European Commission's action plan responding to the PIP breast implant scandal. The measures now in place are intended to prevent any risk of a rerun of that scenario, where the PIP breast implant manufacturer fraudulently replaced medical-grade silicone gel with industrial-grade gel, putting tens of thousands of women at risk of medical complications.

Now that the sector knows the final content of the future Medical Device and IVD Regulations (the texts were officially published on May 5 2017), more notified bodies will likely reflect on whether they have the will and the resources to also now apply for designation under the regulations.

It is known that 22 members of the European notified body association group, TEAM-NB, are planning an en masse application on Nov. 26, 2017, which is the earliest possible date to seek designation. (Also see "Interview: How Are EU Notified Bodies Preparing For Designation Under New Regs?" - Medtech Insight, 17 May, 2017.) But it is not yet known which of the notified bodies that are not members of TEAM-NB will continue in the sector.

Indeed, it may not become clear for some time which notified bodies, other than TEAM-NB members, will choose to apply for designation under the new regulations.

Manufacturers have the option to continue to use notified bodies designated under the current directives until the date of full application of the new regulations. This means companies stick with their current arrangement until the end of May 25, 2020, for the MDR, and until the end of May 25, 2022, for the IVDR. So, some notified bodies may choose to continue until these dates, even if they ultimately opt out of the medtech sphere.

But device manufacturers need to plan their own transition, and thus must get clarity from their notified bodies as soon as possible about whether they intend to apply for designation. There have been predictions that the number of notified bodies could tumble to below 40 under the Medical Device Regulation. That could further serious capacity issues for industry during a time of major transition. 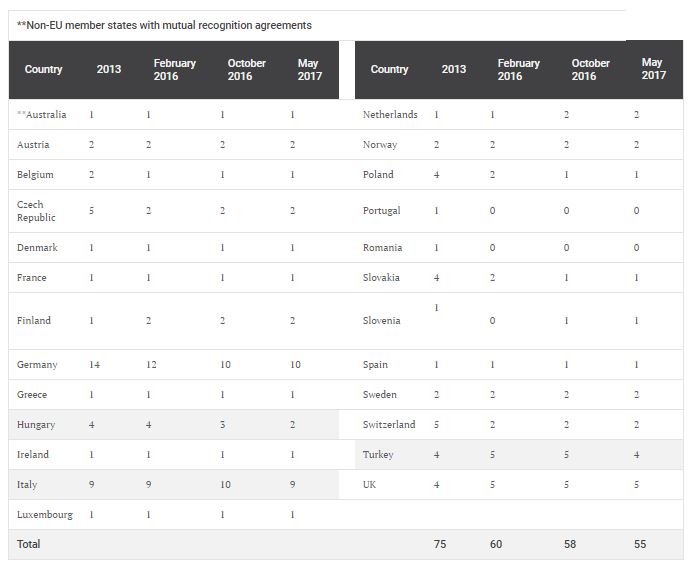 There is also one fewer notified body operating under the Active Implantable Medical Devices Directive than six months ago, with the Czech Republic losing one of its two organizations. Elektrotechnicky Zkusebni Ustav remains the only notified body in that country.

Bucking the trend is the IVD sector, where one new notified body has materialized in Poland – Polskie Centrum Badan I Certyfikaci. That is a different notified body to the one that is designated under the Medical Devices Directive in Poland, which is DQS Polska. 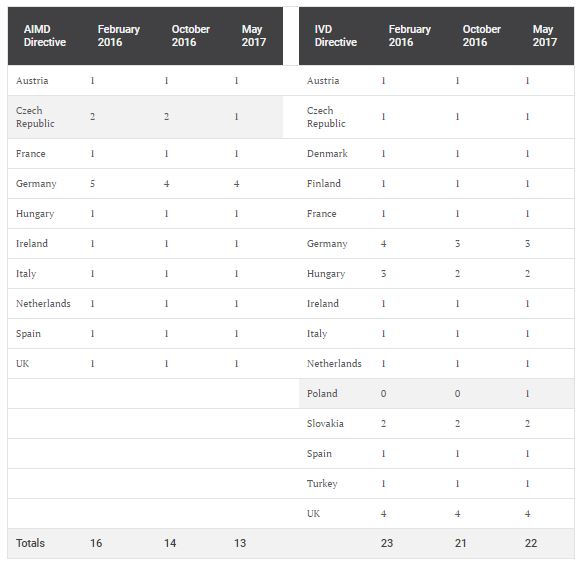