The Decline And Fall Of The Pharma Pipeline

2016 saw a drop in the growth rates for both number of products in active development and in the number of companies in active R&D. The data from a new report from Pharmaprojects seem to point to an end to recent years of accelerated growth in the pipeline that followed five years of stagnation. 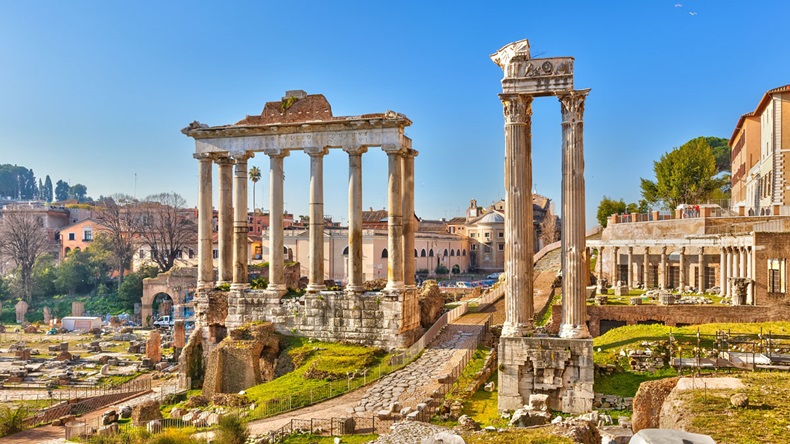 The number of products in active development by the pharma and biotech industries rose to an all-time high in January 2017, but this headline figure flattered what were actual drops in the rates of growth not just of this key metric, but also of the number of companies active in R&D. When added to an actual decline in the number of new active substances launched in 2016 (down by 11%), it paints a picture of an industry whose footing has become slightly less secure.

from Pharmaprojects show that there were 14,872 pipeline projects in development in January 2017, and increase of 8.4% on the corresponding figure from 2016. The growth rates for the previous two years were higher at 11.5% and 8.8%. Citeline's annual review takes a snapshot of the Pharmaprojects database in early January, allowing comparisons to be made across the years.

Editor's note: "Pipeline" in the context of this article and the Citeline white paper means all drugs in development by pharmaceutical/biotech companies, from those at the preclinical stage, through the various stages of clinical testing and regulatory approval, and up to and including launch. Launched drugs are still counted, but only if they are in still in development for additional indications or markets. 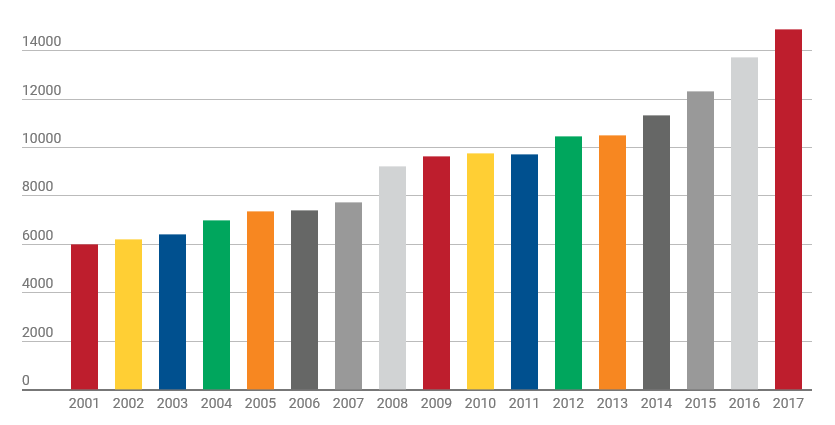 What is reassuring is that the growth is again spread throughout the pipeline. The chart below compares the number of drugs at each stage of development with the equivalent data for last year. The greatest growth occurred at the preclinical stage, with an extra 632 early drug candidates, a rise of 9.2%, but there are increases across the board throughout the clinical and later regulatory phases. 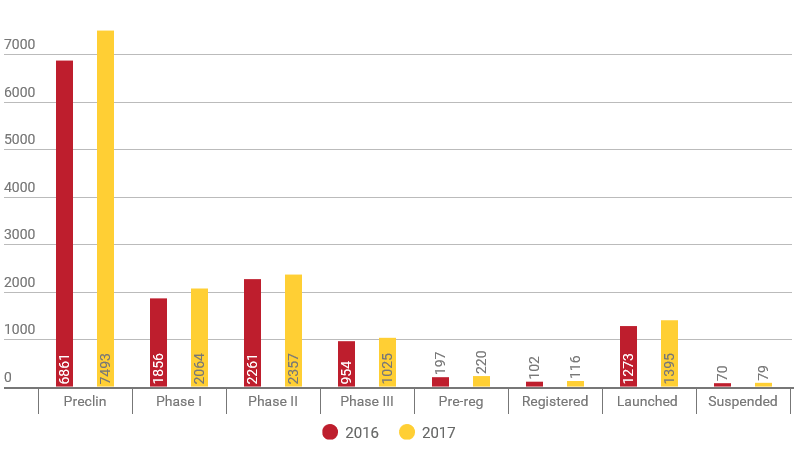 Stripping out the preclinical projects, for which it is notoriously difficult to gain a truly accurate picture, the data from the past decade or so show an upward trend for each of the broad clinical phases.

The increase at Phase I was the greatest, with the number of candidates rising by 11.2%, to reach a figure almost twice the number of that seen ten years ago. The corresponding values for Phase II and Phase III were 4.2% and 7.4%, respectively. All of these increase rates are lower than those seen a year ago – the Phase III figure considerably so (last year it rose by 18.1%). 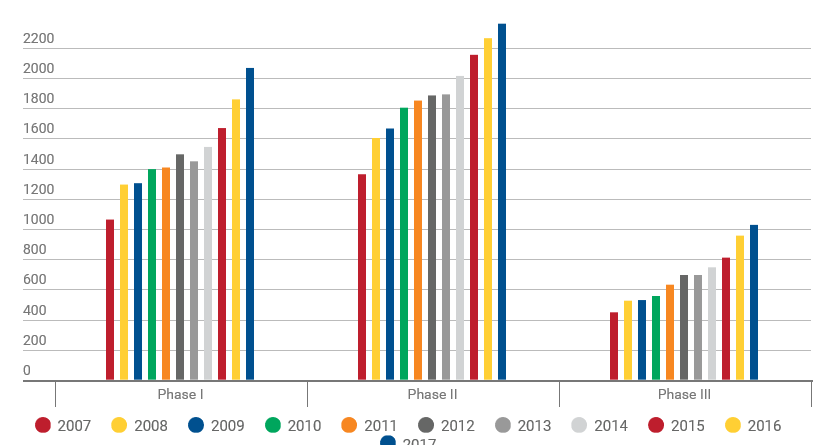 Table 1 lists below lists the Top 25 biggest companies by size of R&D pipeline. While the names on the top 10 companies did not change, there was some jockeying for position among the big players. GlaxoSmithKline PLC lost its top position last year, being squeezed out by a single project by Novartis AG. What's more, the Swiss conglomerate’s ascendancy to pole R&D position is strengthened by the fact that it originated a greater proportion of its pipeline itself.

At least GSK extended its lead over UK rival AstraZeneca PLC, which fell back this year both in terms of position and hard numbers. Johnson & Johnson, Roche and Sanofi also showed declines in the numbers of drugs in their pipelines.

Even without the help of Allergan's contribution, the US giant Pfizer Inc. started to claw its way back up the Top 10 – it last held the top spot in 2011 following its acquisition of Wyeth but subsequent consolidation meant its pipeline ranking had consistently slipped since.

Similarly, it is already clear that one company set to rise next year will be Johnson & Johnson once its acquisition of Actelion completes (slated for the end of the second quarter). Actelion Pharmaceuticals Ltd. currently has 24 drugs in its pipeline, but this deal is complicated by the fact that its Phase II and below pipeline will be spun off into a separate company under the direction of the Swiss biotech's current R&D hierarchy, in which J&J will have a minority stake. (Also see "J&J’s $30bn For Actelion Buys Immediate And Longer-Term Value" - Scrip, 26 Jan, 2017.)

Outside the top 10, Shire PLC moved up the charts thanks to its acquisition of Baxalta Inc., and big riser Ligand scraped into the top 25 by virtue of a raft of licensing deals – its tally of 66 (up from 38 the previous year) was notable for having the highest proportion of drugs that did not start their lives in the company's own labs.

But crashing out of the top 25 were Gilead Sciences Inc., which entered at 25 last year only to slip back to 27th position despite a slight growth in its pipeline, plus the Japanese companies Mitsubishi Tanabe Pharma Corp. and Sumitomo Dainippon Pharma Co. Ltd., which fell back to 28 and 31 spots, respectively.

The pharma universe once again expanded last year – although its growth rate contracted. "Almost 750 new companies were identified and added to the Pharmaprojects database over the past twelve months – a staggering birth rate, and a significant uptick from the 618 seen in both preceding years," said the report's author Ian Lloyd, senior director at Pharmaprojects. "However, company acquisitions, and more pointedly, company deaths or hibernations, meant that the total number of active companies grew by less than half this figure." 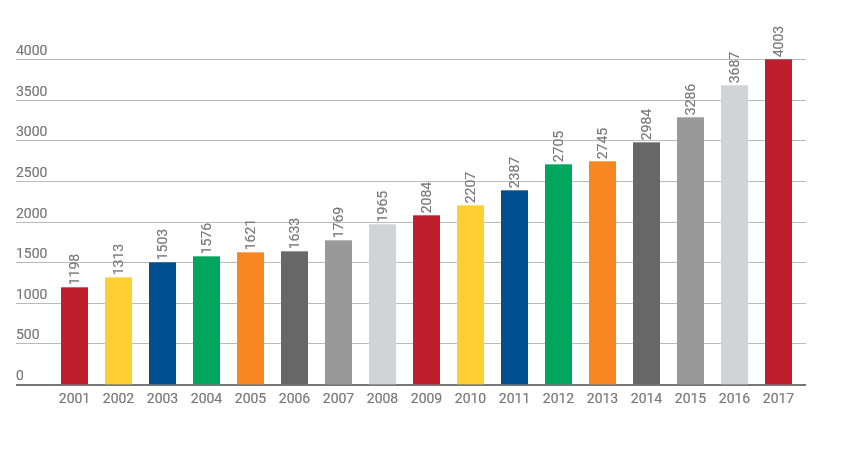 Also notable was the eastward migration of pharma's base. Asian firms now account for 19% of companies, up from 16% last year, and driven not only by further expansion in China, but also by general growth throughout the region.

This has come at the expense of Europe and the US, which both fall back by 1%, although the latter still accounts for almost half of all R&D companies worldwide. "Keen Breixiteers will no doubt be heartened by the UK taking its share up from 5% to 6%, and it will be interesting the track this metric over the coming years," said Lloyd. 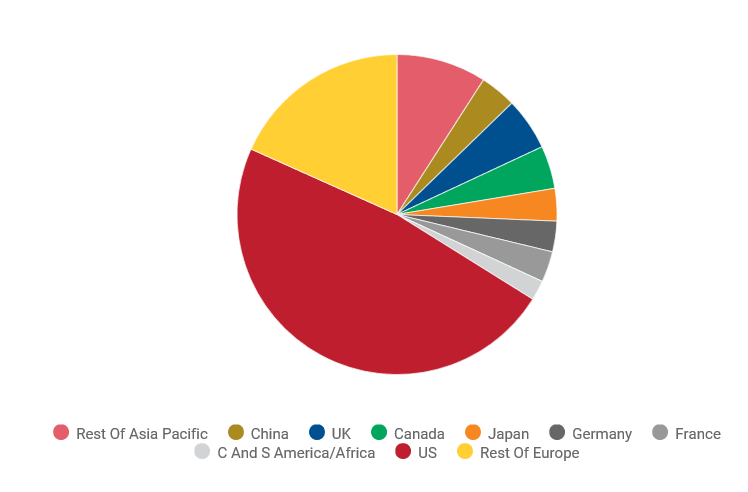 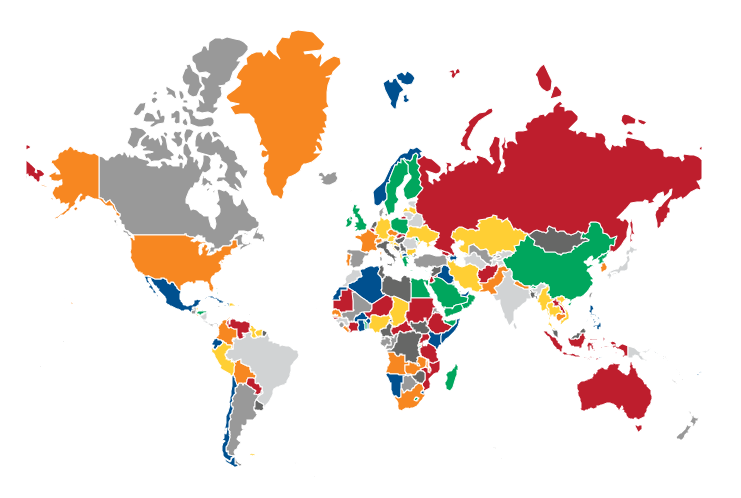 What's not changed is cancer's dominance of the pipeline. The Oncology therapy area keeps bucking the trend, with a rise in its rate of growth this year.

The number of Oncological therapeutics in the pipeline increased by 669 candidates, a growth rate of 16.0%, just surpassing last year’s record-breaking 15.9% rise. This puts it in 2017 growing at almost twice the rate of the pipeline as a whole, and taking a 32.6% share of the pie – almost a third.

"For the first time, there is perhaps a hint that others being squeezed out by this unchecked expansion – the Respiratory group actually posts a decline this year. Elsewhere, some other expansion rates are pegged back, with Neurologicals only up by 1.2% and Musculoskeletals by 5.0%," commented Lloyd.

Alimentary/Metabolic drugs increased by a percentage close to the average, and Anti-infectives actually also beat the mean with an 11.1% rise.

The R&D Pipeline By Therapy Group 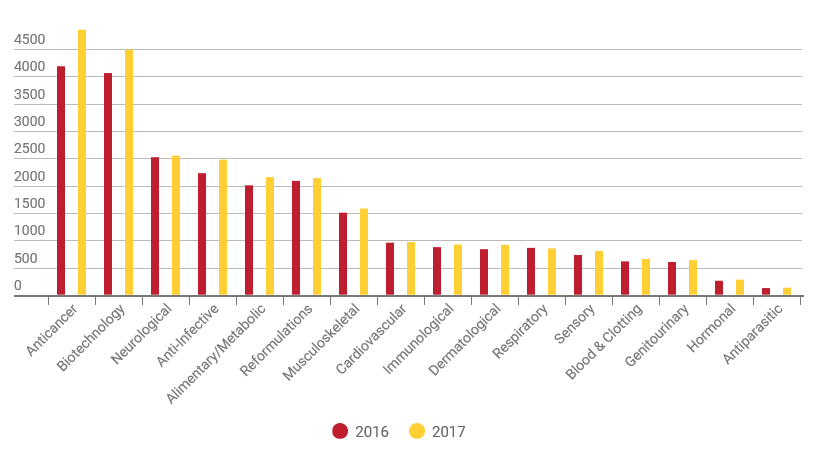 Breaking down the therapeutic categories further, what becomes quickly apparent is the continued expansion of the immune-oncology pipeline. The table of the top 25 Therapeutic categories listed by Pharmaprojects shows that while the general cancer category stayed top with a 7.7% increase, there was a 25.3% growth in numbers of immunological anticancers, driven by IO products, narrowing the gap.

Another Elsewhere, the once out-of-favor Gene Therapy category continued its renaissance with a second straight year of growth, increasing by 31.2% on the back of a 41.8% expansion last year. Both prophylactic vaccines and antivirals contributed to the anti-infective rise but general cell therapy category dropped out of the Top 25, being replaced by anticancer vaccines.

The drop in growth rates follows two successive declines in the number of novel drugs reaching the market for the first time – these will be discussed in a companion piece to be published shortly, but the headline data is that they fell by 11%. In 2015, there were 46 new active substances launched in their first markets worldwide compared with 63 the previous year.

The full Pharma R&D Annual Review 2017 white paper is available from Pharmaprojects and also contains analysis of the R&D pipeline by: