Pharma companies have repurposed drugs into single pill combinations for years – it's nothing new. And critics will argue that industry only develops combinations to prolong patent life and maintain revenue on aging products – a practice referred to as 'evergreening.' But there are valid clinical reasons for producing a good fixed dose combination including lower doses used, higher efficacy, lower rates of adverse events, and reduced pill/injection burden on patients.

The American Diabetes Association just wrapped up the 77th annual Scientific Sessions in San Diego, CA. One recurring theme emerged as the need to treat type 2 diabetes more aggressively and to do so with combination therapy including fixed dose and fixed ratio combinations. Of note, Dr. James Gavin from Emory University stated as we learn that type 2 diabetes is a complex disease with many pathophysiologic contributing factors leading to beta cell dysfunction, the need for multiple modes of treatment targeting more of these pathways becomes apparent [1].  He outlined the drawbacks of traditional step-wise therapy and how it can lead to prolonged periods of hyperglycemia. Chastising the diabetes community for too much dependence on monotherapy, he suggested looking towards the hypertension community as they have leveraged knowledge from trials and clinical experience to begin treatment with combinations early. Indeed, the JNC 8 guidelines for initiating antihypertensive treatment suggest fixed dose combination therapy as one of the strategies.

The economic aspect of fixed combinations is a multifaceted issue. On one side, the drugs are newer and generally more expensive. On the other, some patients will have reduced co-pays depending on their insurance. Patient satisfaction and adherence is often higher with combination products and non-compliance can lead to complications that have far greater economic effects.

There are many fixed combinations for type 2 diabetes currently on the market or in development. Many fall into the 'classic' category and utilize metformin or insulin sensitizers, often with DPP4 inhibitors [3]. The potentially more novel formulations involve SGLT2 inhibitors, GLP1 agonists, and diabetes drugs + weight loss drugs. According to Pharmaprojects, there are two launched combinations of GLP1 and insulin (IGlarLixi and IDegLira) and ten projects in active development, though the latter are all in Phase I or remain preclinical.  There are just five compounds with SGLT2 inhibitors not involving metformin, all utilizing combination with DPP4 inhibitors (Glyxambi combining empagliflozin and linagliptin and Qtern with dapagliflozin and saxagliptin) while the remaining projects have submitted registration documents but have yet to gain approval.  One antidiabetic/weight loss combination suggested was canagliflozin + phentermine. To date, that combination has only been studied as co-administration (not fixed dose combination) for weight loss in non-diabetic obese patients.

The SGLT2 novel combination market appears to be the next untapped space for development. Although dapagliflozin and empagliflozin have both been studied in co-administration trials with insulin, there are no publicly disclosed projects involving fixed combination of any SGLT2 + insulin at this time. It is unclear if any company would reformulate an oral SGLT2 to be combined with the injectable insulin so a fixed combination may be better suited for one of the several oral insulins in development. Additionally, there are no disclosed combinations of SGLT2 + GLP1. Interesting questions remain – such as whether the cardiovascular benefits from the SGLT2 drugs seen in EMPA-REG-OUTCOMES and CANVAS trials and the benefits from GLP1 in LEADER have additive effects when taken together. While there are no SGLT2/GLP1 combinations underway, novel combinations involving GLP1 are in development. Intarcia Therapeutics has several combinations of undisclosed peptides and antibody fragments with ITCA-650 under early stage research.

Within the cardiovascular space, several “polypills” are in development for primary or secondary prevention of coronary artery disease. These pills involve the combination of three or even four separate drugs into one fixed dose.  In type 2 diabetes, there are only two drugs in development that start to enter polypill territory. One is a combination of dapagliflozin + saxagliptin + metformin while the other is a combination of empagliflozin + linagliptin + metformin.  Both drugs are in Phase I.

Fixed dose combination therapy can offer efficacy and safety while delivering increased patient satisfaction. It is unclear whether this satisfaction will translate into long-term increases in adherence and ultimately better outcomes which can lower the overall costs of care. Payors may hesitate to cover reimbursement for some of the newest combinations, especially those of two branded non-generically available drugs. Detailed clinical studies and claims data analyses will be necessary to prove one way or the other the value of fixed combinations. 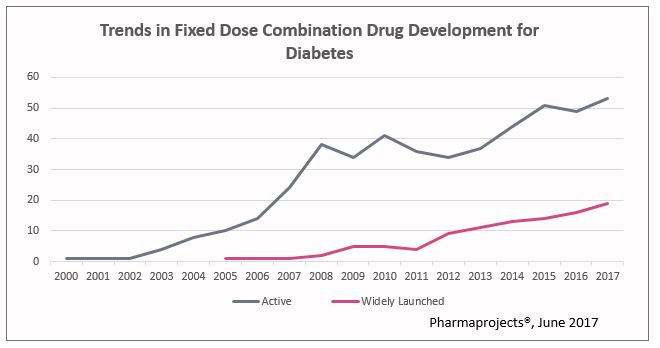 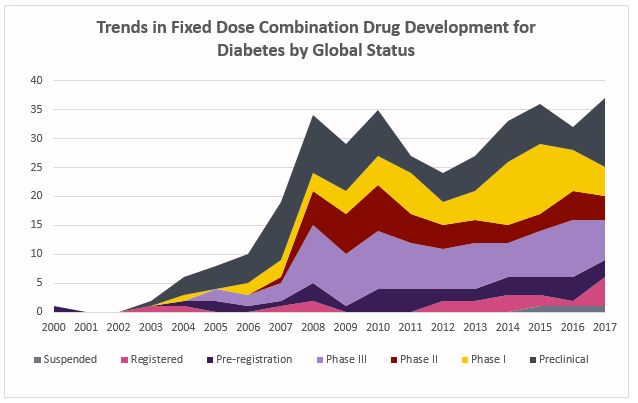 [3] Buse JB (2017). The Future of Combination Therapy in the Treatment of Type 2 Diabetes—Which Classes, Why, and When?  Presented at the American Diabetes Association Scientific Sessions, San Diego, CA.