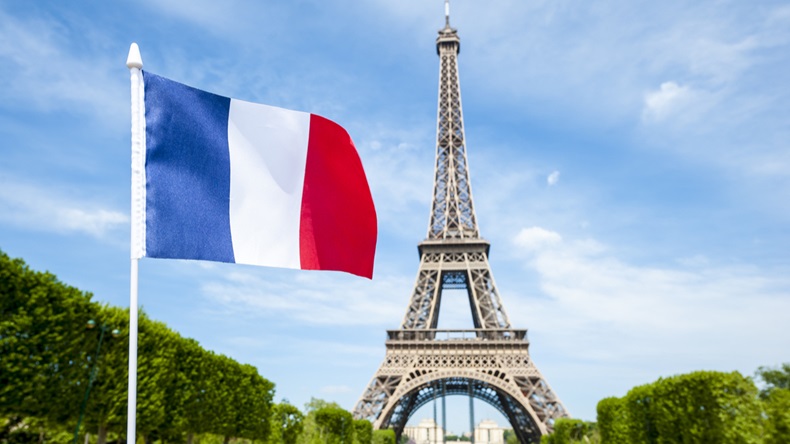 Self-medication sales in France declined by 4.6% to €2.11bn in 2018, reported local industry association Afipa, which blamed the single-digit decline on a poor flu season and changing market dynamics.

Incidence of cold and flu at the start of 2018 had been lower than in 2017, Afipa noted, and this had been compounded by the 2018/2019 season beginning much later in the year than expected. Furthermore, self-medication sales had also been hit by the deteriorating economic situation in France and the wave of anti-government protests – involving the so-called ‘gilet jaunes’ – that swept the country at the end of the period.

The poor performance of the self-medication segment saw overall self-care sales in France slip back by 0.3% to €3.87bn in the 12 months (see Figure 1), marking the first year since 2012 that the market had failed to grow, Afipa pointed out.

“The self-care market is facing a number of long-term development challenges, such as new modes of consumption moving towards more ‘natural’ products, and the fragmentation of the pharmacy market. These changes come to shake up the established model," commented Afipa’s president Franck Leyze.

Taking a closer look at the OTC market in 2018, French self-medication sales reported by Afipa – in collaboration with market researcher OpenHealth – comprised non-prescription turnover from non-reimbursable treatments that fell by 5.3% to €1.67bn, while non-prescription sales of reimbursable drugs slipped by 2.0% to €437m (see Figure 2).

Examined by therapeutic category, respiratory and analgesic OTC remedies remained dominant in France in 2018 (see Figure 3), despite sales of both declining significantly, by 9.1% and 6.6% respectively.

Digestive, homeopathy and circulatory treatments also saw their sales dip in 2018. Across the top-10, only sales of dermatology products improved over the 12 months – albeit only slightly – edging up 0.6% to €220 million.

In Afipa’s ranking of the top-10 self-medication companies by value sales in 2018,Sanofi snatched the number-one spot from Boiron (see Figure 4), thanks to its acquisition of the ninth-largest player in 2017,Boehringer Ingelheim GMBH, plus the growth of its leading brands, including the Doliprane analgesic,Decontractyl muscle relaxant and Rhinathiol decongestant. 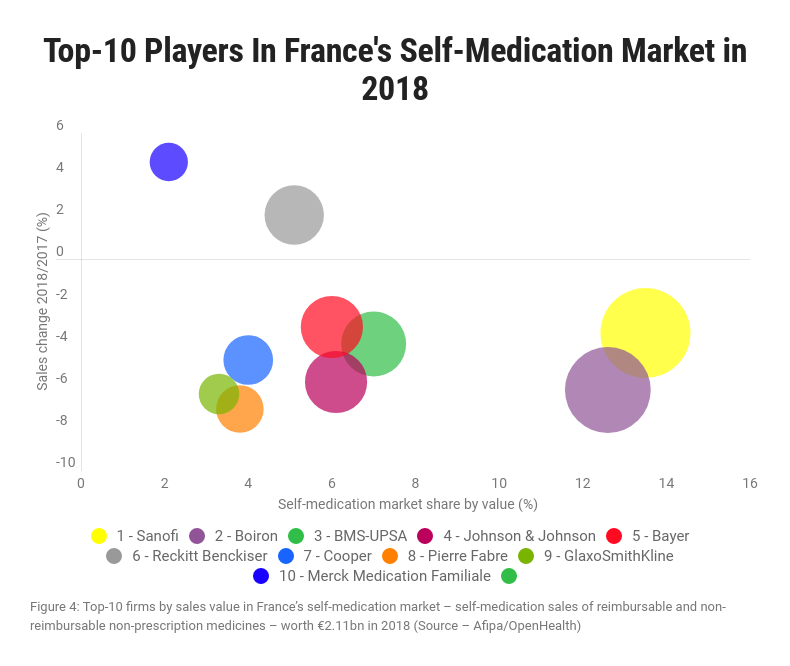 Other changes to the top 10 saw Pierre Fabre Group drop from eighth to tenth spot, while GlaxoSmithKline PLC went in the opposite direction, up to ninth. Sanofi’s swallowing up of Boehringer opened the door for Merck KGAA– since acquired by Procter & Gamble Co.– to enter the ranking at number 10.

The top-10’s collective share of the self-medication market reached 63.0% in 2018, edging up from 62.7% in the previous year. Despite taking a slightly larger slice of the market, the 10 firms’ collective value sales fell by 4.1%.

Not only did Sanofi knock Boiron off the top spot in terms of total sales, but also in the ranking of biggest-selling self-medication brands in 2018.

Sanofi’s Doliprane took the number-one position away from Boiron’s Oscillococcinum homeopathic flu treatment, which fell back to second place, ahead of Laboratoires Urgo’s Humex cold remedy, which maintained its number-three spot (see Figure 5).

Servier SA's Daflon haemorrhoid treatment shot up the rankings from eighth in 2017 to fourth, displacing Johnson & Johnson’sNicorettesmoking-cessation brand, which slipped one place to fifth.

On the whole, French consumers had “remained faithful” to their favorite OTC brands in 2018, Afipa pointed out.

As well as topping the best-selling brand ranking, Doliprane also placed first among the top-10 brand contributors to growth of the self-medication market in 2018. Doliprane added sales of €4.7m compared to the prior year, ahead of Merck’s Onctose insect bite treatment, which added €3.1m.

Sanofi also took third-place in the ranking, with Decontractyl adding sales of €3.0m in the 12 months, just ahead of Reckitt Benckiser Group PLC’s Nurofen Flash analgesic, up €2.7m, and H2 Pharma’s Oxomemazine H3cough line, up €1.9m.