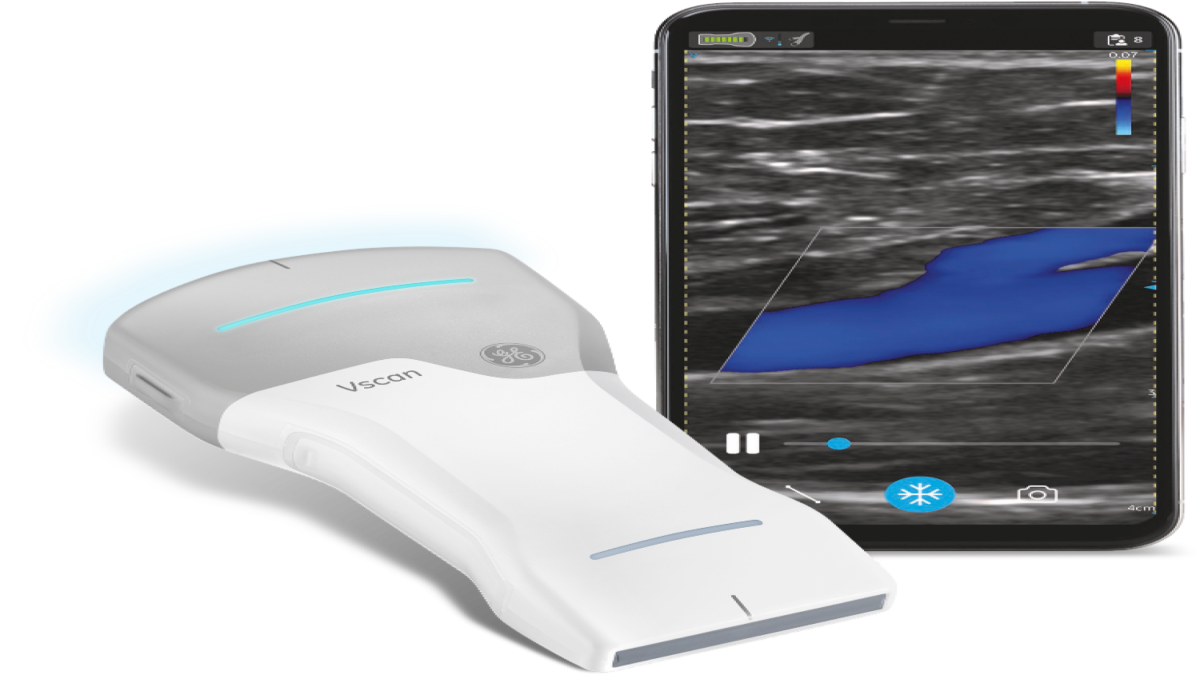 At a 16 March press conference, GE Healthcare stressed that the device allows for “improved collaboration” between practitioners. Data obtained by Vscan Air can be exported in several ways, including cloud-based transfers. Patient images are automatically anonymized to ensure privacy is maintained.

GE’s Vscan product line began in 2010, with over 30,000 devices currently in use, according to GE Healthcare. GE Healthcare also claims the recent development allows for higher flexibility of use, as there are no longer any wires or constant connections needed to operate the device.

As COVID-19 wrought its effects globally, the need for rapid image collection to aid in triage became apparent, and thus ultrasound saw increased demand. Clinicians were surprised by the utility of ultrasound, with images matching the diagnostic capabilities of X-ray and computed tomography imaging. (COVID19 Raises Demand For Butterflys SingleProbe Ultrasound System)

Due to the risk of infection from COVID-19, smaller form-factor devices – mostly handheld – became preferable, as sterilization of these devices is easier. Some handheld ultrasound devices forgo the “wireless” branding, as many, such as Butterfly Network's Butterfly IQ device, rely on a connection to a smartphone or other mobile device to operate.

Wireless or handheld, these ultrasound devices differ significantly from traditional ultrasound devices. Instead of a piezoelectric element producing acoustic waves, the smaller devices have a silicon chip that is responsible for creating the image.

Hitachi were the first to produce a chip-based transducer, releasing the Matrix linear transducer 4G CMUT in 2009, but few competitors joined the market until relatively recently. Examples of newer competition include Kolo Medical’s SiliconWave transducer, launched in 2017, Butterfly IQ, launched in 2018, and Exo Imaging’s announcement of a 2021 release for its chip-based transducer in 2020. (Start-Up Spotlight Exo Hopes To Democratize Ultrasound With Handheld Device)

Other competitors include Siemens Healthcare; Philips; CJ Medical and Clarius.

New medical technology that addresses a need, and does so affordably, will always be in demand, and chip-based transducers are cheaper to produce than traditional systems because silicon is less expensive than piezoelectric materials. They are also able to handle higher frequencies than piezoelectric materials, allowing for deeper penetration. The ability to batch produce silicon materials means that chips are consistent, reducing the need for calibration, and improving ease of integration with electronics.

Data provided from the Ultrasound Intelligence Service by Omdia shows that in 2019 and 2020, the market for handheld ultrasound devices saw growth rates of over 30% and 38% respectively. This was largely due to the release of Butterfly Network’s IQ device in 2018, which had a selling price of $1,999, far less than the $8,000 to $10,000 price of competing devices, prompting huge numbers of sales.

The low price of Butterfly has motivated GE Healthcare, Phillips and other competitors to lower prices for handheld ultrasound devices, with prices exhibiting a compound annual growth rate of –4.5%, according to the Ultrasound Intelligence Service by Omdia.

More insights about the future of healthcare technology can be found by visiting Omdia.